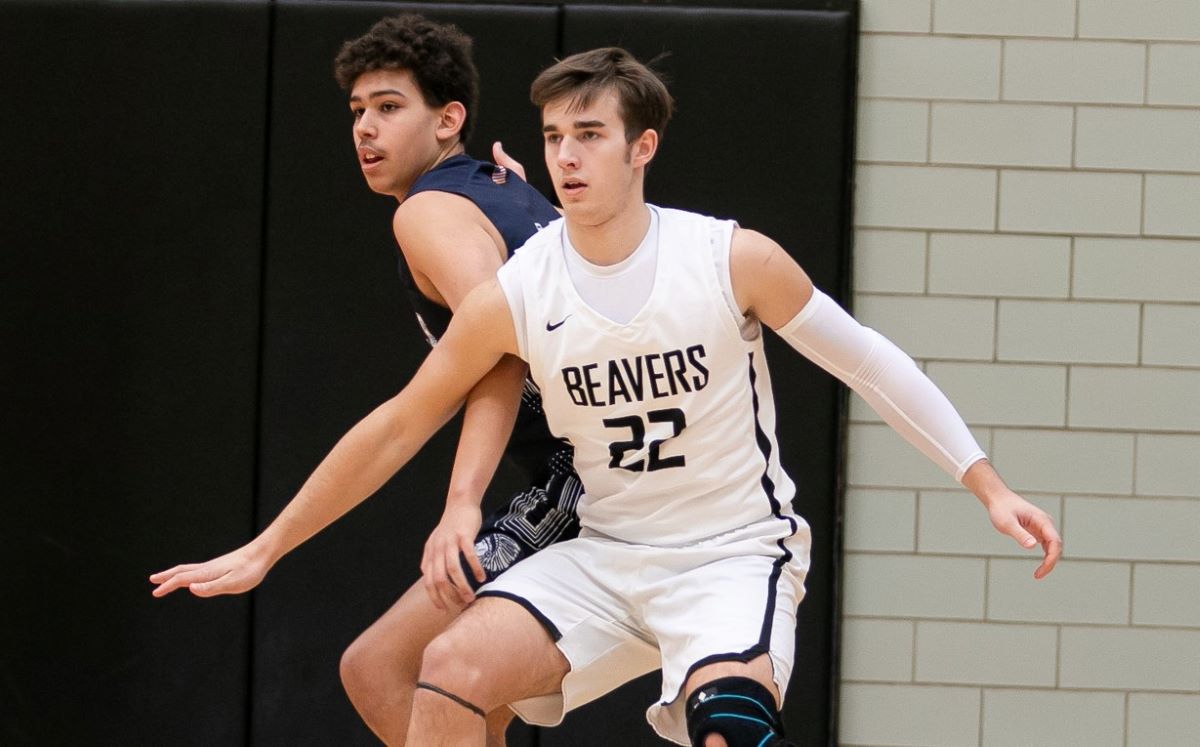 Cooch Husted had 11 points and 7 rebounds to help DuBois beat ECC in a battle for a share of first place in the D9 League Wednesday night. Photo by Jared Bakaysa of JB Graphics. See more of Bakaysa's work here

Nussbaum got the ball from Charlie Breindel on the right wing and tried a 3-pointer from about three feet behind the arc. But Pasternak got out to get a piece of the shot, which fell into the hands of DuBois’ Chooch Husted as time ran out.

It was a bit of redemption for Pasternak, whose ill-advised baseball inbounds pass with 29.5 seconds left hit the partition on the gym ceiling that separates the two sides of the gym resulting in a turnover giving the ball back to ECC just moments after the Crusaders’ Jordan Wasko had missed a baseline driving layup.

DuBois, though, had only committed one foul at that point of the half and used those fouls to keep ECC from being able to set up anything on offense.

Finally, the Crusaders got to inbound the ball with 4.4 seconds left with DuBois no longer able to foul without sending ECC to the line. Pasternak, though, came up with the block to win the game.

While a close game, the final half of the fourth quarter went by without either team scoring a point.

DuBois took a 34-29 lead thanks to five straight points from Ryan Kovalyak, including a 3-pointer with 4:39 to play, the last points for the Beavers.

Breindel answered quickly on the other end for ECC hitting a 3-pointer with 4:22 to go making it 34-32, but that was the last points scored in the contest.

Husted, the Allegheny Grille of Foxburg Player of the Game, talked about the win – and why he is called Cooch.

Wasko hit three 3-pointers and finished with a game-high 13 points for ECC with Breindel adding eight.

The win improved DuBois to 14-4 overall and 5-1 in the D9 League while ECC dropped to 15-3, 5-2 in league play. All three teams have a shot to at least share the league title.

DuBois can win the league title outright if it wins its final four league contests, including at Brookville, who is 6-1 in league play, Feb. 18. ECC’s most realistic shot is a tie for the league crown which could happen if it wins out in league play including beating Brookville Tuesday, Feb. 8, and Brookville then beats DuBois. Brookville could win the league crown by winning out as well. Of course, St. Marys, Bradford, and Punxsutawney could all play spoiler rolls as well by beating one of the top three squads.

JOHNSONBURG, Pa. – Jalen Kosko hit a spinning, game-winning jumper from just inside the 3-point line as time expired in overtime to give visiting DuBois Central Catholic a 52-50 overtime win against the Rams.

CLARION, Pa. – In a battle for at least a share of first place in the KSAC Small School Division, Clarion built a 33-17 halftime lead then held on for dear life to top visiting North Clarion, 60-58.

But needing to go the length of the court in just three seconds, Collin Schmader took a shot just after the horn that was missed but shouldn’t have counted anyway.

Hartle had gotten North Clarion within one, 59-58, on a 3-pointer with 10 seconds to go, and Christian Simko hit the first of a two-shot foul with 5.3 seconds left before missing the second one. North Clarion got the rebound and called timeout.

Simko had a big first half where he scored 18 of his team-high 23 points before the break.

Clarion is tied with Union for first place in the KSAC Small School at 5-1 in league play. North Clarion is now a game back at 4-2. Clarion is at Union Friday, weather permitting, while North Clarion also plays Union, hosting the Golden Knights Feb. 16. The top two teams advance to the KSAC playoffs this year – although all three teams should be in the District 9 Class 1A playoffs.

OIL CITY, Pa. – Union kept pace with Clarion at the top of the KSAC Small School Division thanks to an easy, 72-32, win at Venango Catholic.

SHEFFIELD, Pa. – Alex Carlson’s wide-open 3-pointer from the right elbow as time ran out was off the mark, and Sheffield held on to beat visiting Brockway, 50-47, in AML action.

The Wolverines seemed in complete control following a breakaway layup from Lucas McNeal with just over a minute left that gave them a 48-41 lead.

After a timeout, Carlson stole the inbounds pass and scored to make it 48-45 with 42.6 remaining.

Another turnover turned into a Marcus Bennett layup off an offensive rebound with 21 seconds left to make it 48-47.

Following another timeout, Brockway was able to tie up a Sheffield player, but the possession arrow favored the Wolverines with 16.8 to go, and McNeal scored on a breakaway the other way with 10.5 left to make it 50-47.

KANE, Pa. – In a non-conference matchup, Dan Park scored 20 points to lead visiting Ridgway to a 48-28 win over Kane.

Jake Franz and Dalton Dixon each added seven points for the Owls.

The teams were tied at 30 going to the fourth quarter before the Gremlins got the key triples plus five points from Luke Cramer, playing in his first game since suffering an ankle injury against Clarion Jan. 11.

SENECA, Pa. – Visiting Redbank Valley put four players in double digits led by 22 points from Marquese Gardlock on its way to a 75-40 win over Cranberry in KSAC Large School action.

Bryson Bain added 15 points for the Bulldogs who also got 13 from Owen Clouse and 12 from Chris Marshall.

The Warriors then had the ball with a chance to tie or win the game but turned the ball over with about four seconds to play.

Jordan Hesdon then hit one of two free throws to make it a 3-point game with four seconds left, and C-L got the offensive rebound on the second miss to secure the win.

Rylie Klingensmith led C-L with 19 points with Hesdon, seeing his first extensive action since an injury sidelined him following a Jan. 19 game at Union, scored 16 points to go with four steals, and three assists.