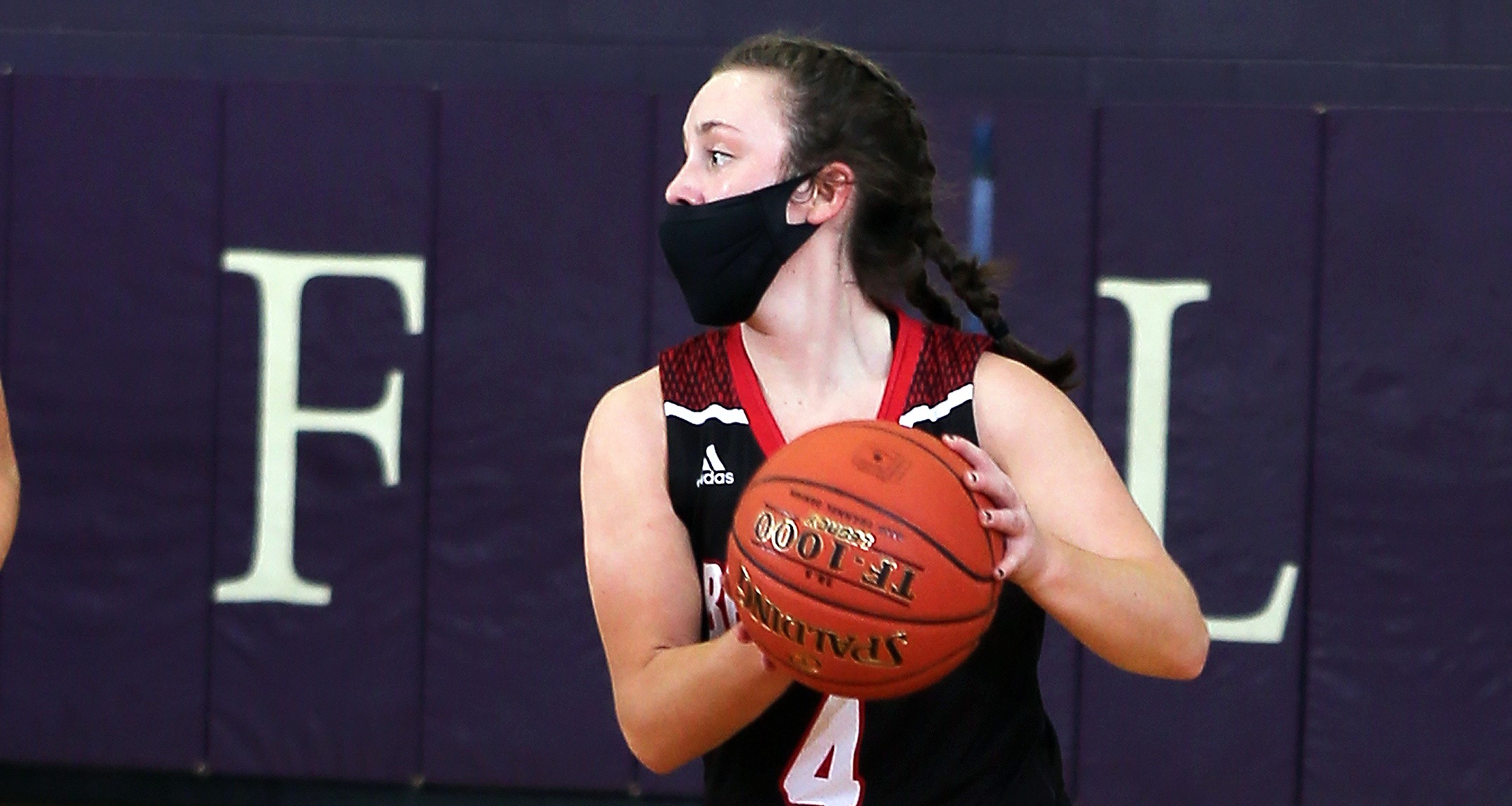 Alana Benson hit a pair of key fourth-quarter 3-pointer for Bradford in its comeback win over Smethport Wednesday. Photo by Paul Burdick. Check out more of Burdick's work here

The Lady Owls trailed 30-27 going to the fourth quarter and were down 34-31 following an offensive rebound and put back by Coryn McClain with six minutes left.

But Benson tied the game at 34 with a 3-pointer 13 seconds later.

Smethport went back ahead one last time, 36-34, on a bank shot by Elizabeth Hungiville with 4:44 to play.

Enter Lary, who missed a shot but saw Jess Kerr grab the rebound and find Lary open. Lary was then fouled and hit both free throws to put Bradford ahead for good, 41-39.

After Smethport missed a shot with 2:25 to go, the Lady Owls were able to run all but 4.7 seconds off the clock before shooting a one-and-one.

Having only been whistled for four fouls, Smethport waited until the 42.8-second mark to give the fifth foul. Lary dribbled the next 32 seconds before another foul was given by the Lady Hubbers with 10.3 to play. Nearly six more seconds went off the clock before Smethport fouled again sending Benson to the line where she hit the first shot and missed the second giving Bradford a 42-39 lead.

After a Smethport timeout with 3.9 seconds left, Bradford, which had fouls to give, gave one at midcourt with two seconds to play.

Danielle Nelson then tried an inbounds pass that was a little high and went through the outreached hands of Abby Lutz with an entire second going off the clock. With just one second to play, Smethport elected not to press ending the game.

Larry led all scorers with 24 points, including six in the fourth quarter and 13 in the second half.

Milliron led the Lady Lions with 17 points with Dunn adding 12.

The She-Wolves trailed 38-34 after the third quarter – they dug themselves a 12-4 hole after one quarter – before riding McFarland’s hot hand in the fourth quarter to the win.

Mia Sherman had the hot hand for A-C Valley knocking down five 3-pointers on her own, including three in the third quarter, while scoring 17 points. Baylee Blauser added 10 tallies for the Lady Falcons who also got nine points from Andrea Meals.

Rosalyn Page added 14 points in the win for the Lady Falcons.

Clearfield led 13-7 at the end of the first quarter before being outscored 23-6 in the second eight minutes to go down 30-19 at halftime.

Bridget Scanlon then made sure the Wolfpack kept the lead scoring 20 of her game-high 24 points after halftime.

TIONESTA, Pa. – Dominika Logue scored 19 of her game-high 24 points before halftime to lead visiting Union to a 47-19 win over Forest Area at West Forest.

Pry’s double-double was of the 10-point, 10-rebound variety while she also added five steals.

Zoey Hillwig chipped in eight points for the Lady Warriors.

ULYSSES, Pa. – Kyla Johnson scored 11 of her game-high 19 points in the fourth quarter to help St. Marys maintain a seven-point lead entering the quarter on its way to a 38-31 win over Northern Potter.

The Lady Dutch led 27-20 after 24 minutes thanks in large part to a 13-6 second-quarter advantage that saw Abigail Erich score five of her seven points.

Becca Martin led Northern Potter with nine points and nine rebounds with Megan Hyde adding seven points on 7 of 9 shooting from the free-throw line. Aubrey Anderson also had five steals to go with six points for the Lady Panthers.

Feb. 10, 2021 D9 Boys: Redbank’s Big Three Lead Bulldogs Past Laurel; Clearfield, Kane Win Big
District 9 and District 10 Basketball and Wrestling Schedule for Feb. 11, 2021
This website or its third-party tools process personal data.In case of sale of your personal information, you may opt out by using the link Do not sell my personal information.
×
Manage consent