ECC Squeezes Past Forest Area into PIAA 1A Playoffs 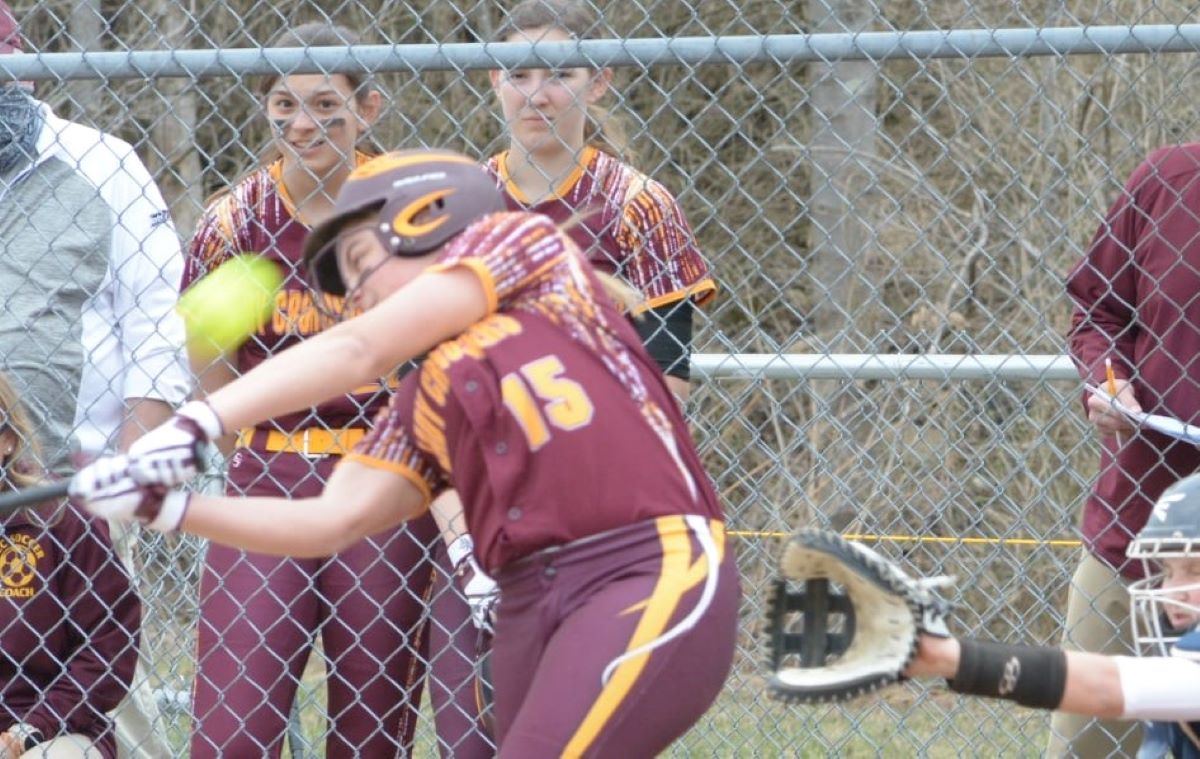 Lucy Klawuhn (pictured during the 2021 season) had two hits and two RBIs in ECC's win over Forest Area Thursday. Photo by Kelli Surra

BROCKWAY, Pa. – Gabby Weisner’s dash from first to third on a wild pitch with one out in the sixth inning ended up being the play in an 8-7 Elk County Catholic win over Forest Area in the District 9 Class 1A softball “true” second-place game at Brockway Thursday afternoon.

Weisner, who had singled with one out in the sixth, scored the eighth run of the game for the Lady Crusaders, who will face District 10 champion Saegertown in the PIAA playoffs Monday, on Lydia Anderson’s second sacrifice fly of the game.

While that run seemed inconsequential at the time since it upped ECC lead to 8-4, it turned out to be monstrous when the Fire erupted for three runs in the bottom of the seventh and had the tying run at first when Izzy Flick grounded out to third baseman Syd Alexander to send the Crusaders from a loss in the semifinals to second place against the team that actually qualified for the D9 title game.

The game had twists and turns from the start with ECC being denied at least one run in the first inning because Alexander was called for leaving first base two early on what would have been an RBI hit by Caitlyn Vollmer that would have given the Lady Crusaders an early 2-0 lead.

Instead, up 1-0 thanks to a Lucy Klawuhn leadoff triple and Anderson sac fly, ECC went up 3-0 on a two-out single to center by Klawuhn in the second inning.

Forest Area answered with three runs in the bottom of the second but they could have had more.

Maggie Boehme led off the inning with an infield single off, and Izzy Flick followed with a single to left.

Akeela Greenawalt then hit a sharp ball towards the hole between first and second, but the ball hit Flick meaning she was out and Boehme had to be sent back to second base with Greenawalt safe at first on the rare hit that resulted in an out.

After a Faith Dietrich fielder’s choice, Brenna Thompson singled to third to load the bases before Emma McFarland unloaded them with a double to left field.

ECC answered back with two more runs in the third to retake the lead – for good – when Vollmer delivered a two-run single with one out after Anderson had singled and Emily Mourer doubled leading off the inning.

The Fires got a run back in the bottom of the third thanks to a Madison McFarland base hit leading off the inning and a two-out single by Flick.

Up 5-4, the Lady Crusaders picked up two key runs in the fifth when Mourer drew a leadoff walk, and Alexander hit a grounder to Greenawalt at third. But Greenawalt’s throw to second was high, and courtesy runner Reagan Bauer was safe.

After an infield fly, Ellie Barron brought home a run with a single to center, and a wild pitch scored Alexander to make it 7-4.

Down four and down to its final three outs, Forest Area tried to rally.

Thompson singled on a line drive off Mourer, and Emma McFarland put down a bunt single.

After Alexis Oswald grounded out putting runners on second and third, Madison McFarland singled home a pair of runs with a hit to center. She went to second on the throw home and third on an error by centerfielder Weisner before scoring on a ground out by Emily Aites.

Boehme then won a nine-pitch battle with Mourer to draw a walk putting the tying run on first before Mourer coxed the ground out from Flick, who had been 3-for-3 up to that point.

Vollmer was 3-for-4 with two RBIs for ECC with her courtesy runner, Sarah Hasselman scoring a run.

Mourer got the win going seven innings allowing seven runs, all earned, on 12 hits, two walks, and a hit batter, while striking out two.

Alwine No-Hitter Leads Altoona Baseball Past McDowell in Class 6A Subregional Powered by North Washington Rodeo
Some PIAA Baseball/Softball First-Round Sites, Times Known
This website or its third-party tools process personal data.In case of sale of your personal information, you may opt out by using the link Do not sell my personal information.
×
Manage consent