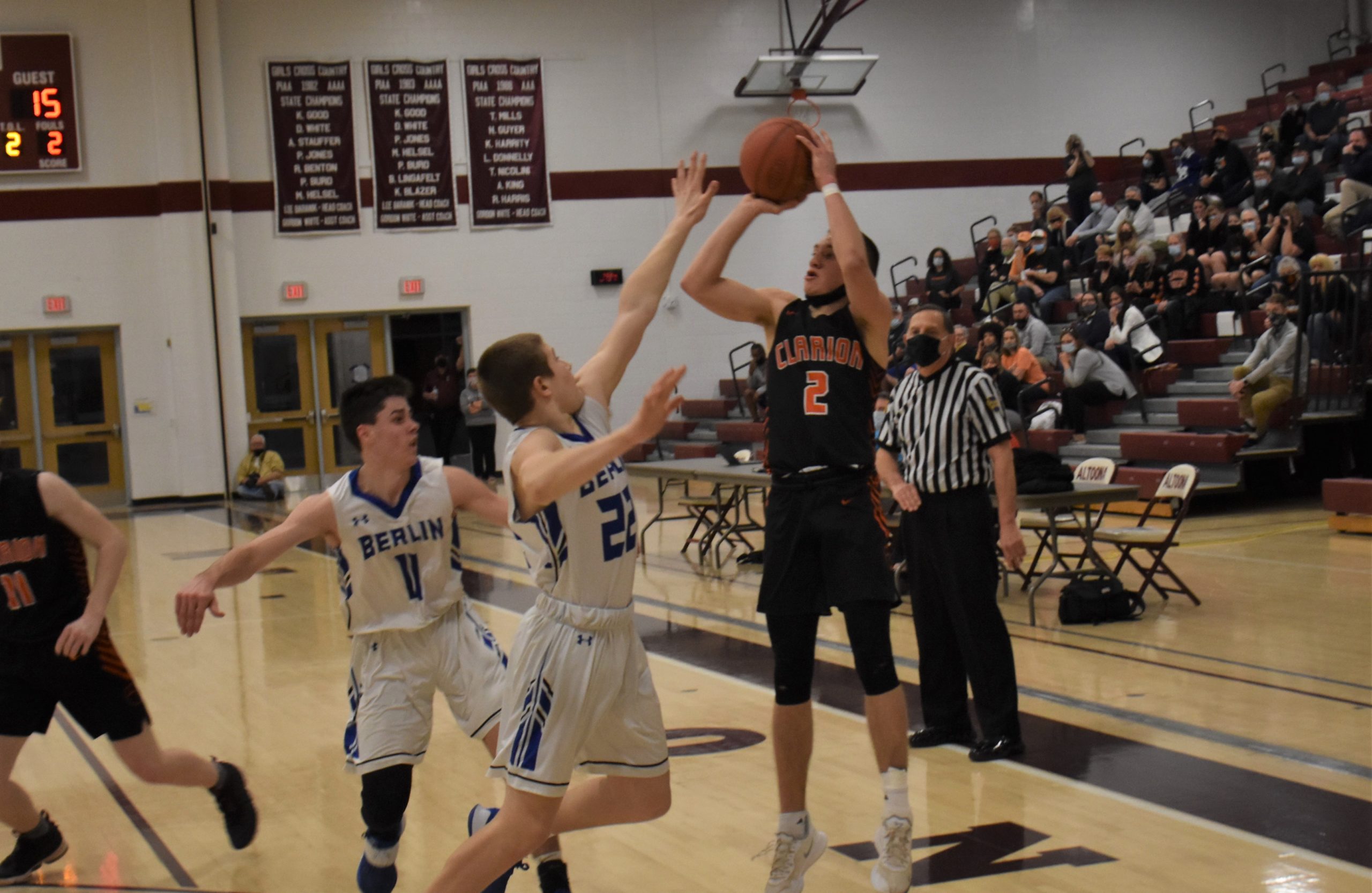 Clarion's Cal German pulls up for 3 during Monday's PIAA Class 1A Semifinal game against Berlin. Photo by Andy Close.

ALTOONA, Pa. – A magical run for the Clarion Bobcats came to an end on Monday.

District 5 champion Berlin was as advertised, knocking off the Bobcats 78-52 in the PIAA Class 1A semifinals at Altoona High School.

“I mean, they’re down right now, but we went from that crappy game at Brockway, to losing on that buzzer-beater (to DuBois Central Catholic) to the state semifinals,” said Clarion coach Scott Fox.

The Mountaineers improved to 27-1 on the season and advanced to play Nativity BVM in the state championship game on Thursday.

Berlin jumped on the Bobcats (17-10) early, leading 16-6 before a Clarion timeout with three minutes to go in the first quarter.

Clarion responded with four different players – Beau Verdill, Hunter Craddock, Cal German and Dawson Smail scoring in a 9-0 spurt to get back within one.

Clarion’s Hunter Craddock looks to go up for a shot over Berlin’s Abe Countryman during Monday’s PIAA Class 1A semifinal game.

“It seemed like we were able to settle in a little bit,” Fox said.

It certainly did, but Berlin showed why it was so dominant this season, a run that now includes 13-straight wins by double-digits.

Sechler’s 3 came at the buzzer.

“That hurts,” Fox said. “They rode the momentum after that shot and then carried it through most of the second quarter.”

Sechler, a Pitt-Johnstown commit, knocked down back-to-back 3s to start the second quarter as well.

By the time German knocked down a pair of free throws for Clarion’s first points of the second quarter, the Mountaineers extended the lead to 20.

Berlin made 10 threes in the game, five of which came from Prosser (who came off the bench) and four more from Sechler.

Many of them were from well beyond the 3-point line, forcing Clarion to continue to extend its zone defense, which allowed Berlin big Abe Countryman to gather a number of offensive rebounds.

“They did exactly what I thought they were going to do tonight,” Fox said. “We had to keep extending our zone further and further out, which makes it harder to rebound and opens up the middle. That’s a big key. That’s why I switched to man, to create a little more pressure.”

The Bobcats battled in the second half, but every time it looked as if they were going to go on a run, Berlin had an answer.

Verdill had a 3-point play to close the third quarter and Ethan Burford knocked down a 3 early in the fourth to get it to 16, the closest the Bobcats got in the second half.

Ezra Brooks scored the final bucket of the season for the Bobcats as the clock ticked down in the fourth.

“They’re great shooters,” Fox said. “I thought that was going to be a problem. That and their offensive rebounding. I don’t think we boxed out as well tonight as we have the past few games.”

It was the end of the line for a senior class for the Bobcats that accomplished so much, including German and Verdill, who finished with 20 and 12 points, respectively.

Sechler finished with a game-high 24 points and Prosser added 19 for Berlin.

The Bobcats will now reflect on a season that saw them advance to the PIAA semifinals for just the fourth time in school history and the first time since 1966.

“This was a special run,” Fox said. “We played a great team tonight.”