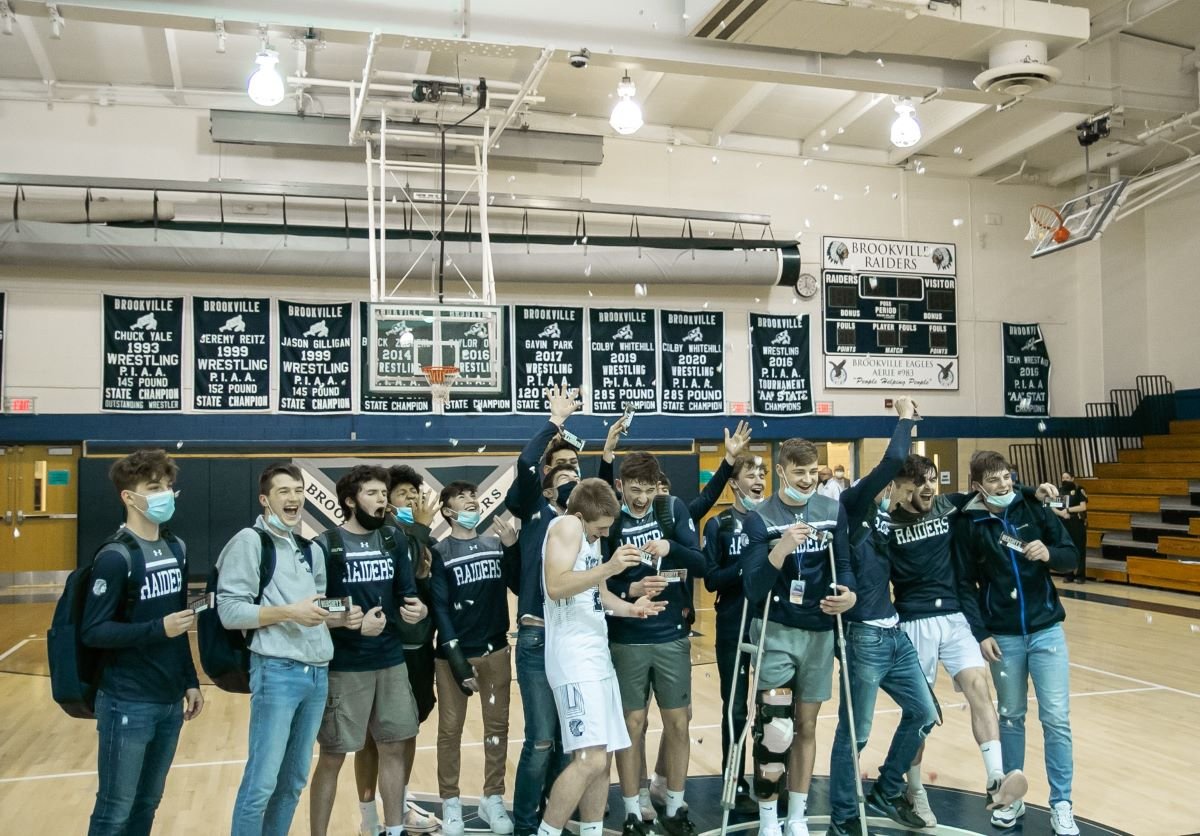 Brookville celebrated going to the PIAA 3A title game in 2021 but didn't get a chance to win a conference it title. The Raiders have that opportunity this week.

As the 2022 basketball season enters the final week of the regular season, conference/divisional titles and conference playoff berths are still at stake.

Here is a look at how things stand in boys’ basketball after games Saturday, Feb. 12.

Ridgway (14-4 overall, 6-1 AML South) has claimed the South title because of a sweep of DuBois Central Catholic.

DCC has secured second place and an AML playoff spot. The Cardinals are 14-6 overall and 6-2 in league play.

If Brookville beat DuBois Friday, then the Raiders win the league title outright for the first time.

But if DuBois beats St. Marys at home Monday and then wins at Brookville Friday, the Beavers win the league title based on having swept the season series from the Raiders.

A DuBois loss to St. Marys Monday gives the league crown to Brookville.

The D9 League doesn’t have a postseason tournament.

Three teams – Union, North Clarion, and Clarion are all within a game of each other with the division title and two KSAC playoff berths on the line.

Here are the possible scenarios:

Union and Clarion win on Wednesday

Union wins the division at 9-1 and Clarion finishes second at 8-2 with North Clarion taking third at 7-3. Union and Clarion advance to KSAC playoffs.

North Clarion wins the division at 8-2, Clarion finishes second at 8-2, and Union takes third at 8-2. In a three-way tie, the head-to-head record of all three teams is the first tiebreaker. In this case, they were all 1-1 vs. each other meaning it goes to the next tiebreaker – record vs. the KSAC Large School Division. North Clarion wins the division based on a 4-2 mark vs. the Large School while Clarion is second thanks to its 3-3 record. Union was 2-4 vs. the Large School Division. North Clarion and Clarion advance to the KSAC playoffs.

Redbank Valley has clinched its first divisional title since 2015. The Bulldogs are 17-3 overall and 8-0 in league play with games left against Clarion-Limestone and Keystone.

While Karns City sits at 7-2 in league play and 16-4 overall, the Gremlins lose the tiebreaker with the Bulldogs because Redbank Valley swept the season series.

Karns City has secured second place and a KSAC playoff spot. Even if the Gremlins would lose to Moniteau Wednesday and C-L (10-10, 5-3) would win its final two divisional games over Redbank Valley and Cranberry to finish in a tie for second with KC at 7-3, the Gremlins win the tiebreaker having swept the season series from the Lions.

The Terrors have a conference game left against Smethport but hold a 2-game lead in the loss column over Cameron County (14-4, 10-2) who still has four conference tilts left to play but can’t catch O-E.

The NTL does not have a postseason tournament.

Curwensville is in its first year in the ICC North, and the Golden Tide are out of the divisional title race with a 5-15 overall and 4-9 league mark,

Clearfield is also out of the Mountain League title chase sitting at 12-8 overall and 7-6 in league play.

Feb. 13, 2022 D10 Hoops: Kennedy Catholic Falls to Ohio Powerhouse St. Vincent-St. Mary
Feb. 14, 2022 District 9 and District 10 Basketball Schedules Powered by Hunter’s Station Golf Club
This website or its third-party tools process personal data.In case of sale of your personal information, you may opt out by using the link Do not sell my personal information.
×
Manage consent