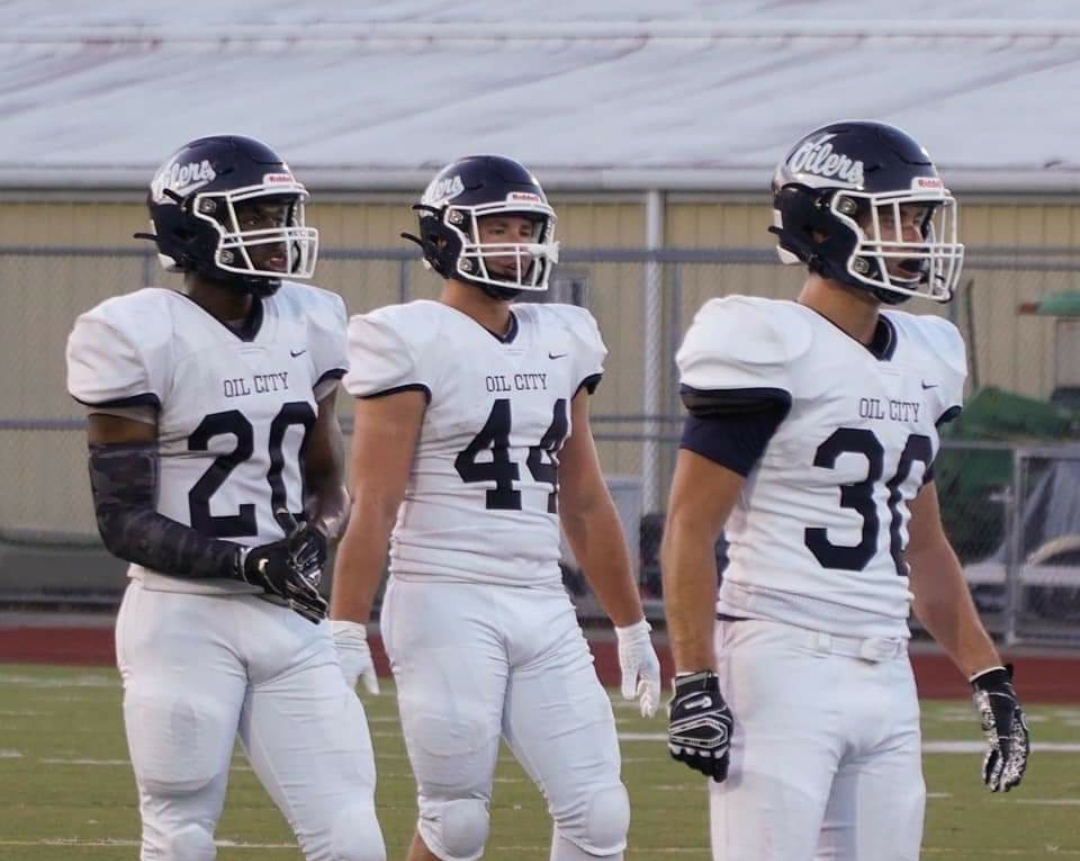 OIL CITY, Pa. – Cam Russell had another monster game, rushing for 228 yards and four touchdowns to lead Oil City to a 38-14 win over Meadville in a Region 8 showdown.

Russell got things going on a 9-yard scoring rush in the first quarter, only to watch as Khalon Simmons gave the Bulldogs a 7-6 lead on an 85-yard punt return.

The lead was short-lived, however, as Brayden Crocker scored from a 1-yard out less than three minutes later to put the Oilers back on top. They never trailed again.

Stahl’s 6-yard run at the 4:58 mark of the third quarter gave the Oilers a commanding 26-7 lead, and Russell found the end zone twice more on the ground on runs of 62 and 5 yards.

Tamoj Lyons-Glover scored on a 50-yard run for Meadville, which was led on the ground by Simmons’ 91 yards.

Cole had all four receptions from Stahl.

FARRELL, Pa. – Led by the rushing attack of Ethan Susen and Darren Miller, Wilmington outscored Farrell 21-0 in the second half en route to a 41-20 victory in an early-season Week 2 showdown.

Quarterback Caelan Bender broke the tie with a 17-yard touchdown run with 2:54 to go in the third.

Farrell took the ensuing drive and was poised to tie the game, but the Greyhounds intercepted a pass in the end zone and marched down the field. This time it was Miller finding pay dirt from 19 yards out early in the fourth quarter.

Susen, who finished with over 200 yards on the ground, capped his brilliant evening with a 41-yard scoring scamper.

Susen had 224 yards for the Greyhounds, while Miller finished with 120 on the ground.

Anthony Stallworth scored three touchdowns in the first half, two rushing and one receiving. He led the Steelers on the ground with 112 yards.

LAWRENCE PARK, Pa. – The Owen Trumbull to Dillon Benson connection was in full effect for Eisenhower on Friday.

The duo hooked up for touchdown passes of 65 and 59 yards as the Knights rolled to a 2-0 start with a 55-6 win. Through two games, Eisenhower has outscored its opponents 102-6.

Cael Black had a first-half touchdown run, and Trumbull connected with Zane Alexander on a 22-yard scoring strike. Alexander also had a rushing touchdown in the first half as the Knights took a 41-0 lead.

Colby Hagg and Keegan Eckstrom had second-half rushing touchdowns for Ike, while Dante Carr found the end zone late for the Braves (1-1).

Trumbull needed just six completions for 204 yards through the air.

GROVE CITY, Pa. – Tied at 14 at halftime, Grove City scored twice in the third quarter to take command in a 34-21 win over Slippery Rock.

Evening their record at 1-1, the Eagles got a 23-yard touchdown run from Curtis Hovis and 27-yard pitch and catch from Logan Breese to Anthony Pereira.

William Mokel’s fourth-quarter touchdown pass to Ethan Plesakov made it 28-21, but Hovis broke off another scoring scamper, this one from 18 yards, to seal the deal.

Mokel was 20-of-35 through the air for 212 yards with 1 touchdown and 1 interception. Plesakov caught nine passes for 98 yards.

GREENVILLE, Pa. – In a matchup of 1-0 teams, it was host Reynolds that rolled past Mercer.

Aidan Mull and Dreyvin Livingston also scored on the ground for Mercer in the first half, while quarterback Brayden McCloskey connected with Jalen Wagner for a passing touchdown.

Wagner added a pick six for good measure in the second half.

GREENVILLE, Pa. – Sharpsville thwarted a game-tying 2-point conversion attempt from Greenville with just over four minutes to play, and the Blue Devils were able to run out the rest of the clock to pick up their first win of the season.

Levi Swartz’s 1-yard touchdown run for the Trojans made it 14-12, but Greenville put the ball on the ground on the 2-point attempt.

Swartz had the only score of the first half, a 34-yard touchdown run that put Greenville up 6-0.

Danny Henwood came out in the second half and raced for a 69-yard touchdown run in the third quarter that, coupled with the extra point, gave Sharpsville a 7-6 lead.

Stephen Tarnoci’s 1-yard scoring plunge made it 14-6 late in the third.

Miller and Wheeler combined to rush for 138 yards in the win.

BUTLER, Pa. – It was the Braeden Soboleski show early for McDowell, as they jumped out to a 28-0 first-half lead en route to a 45-7 win over Butler in Region 9 play.

Soboleski scored on a 48-yard pass from Chris Juchno and a 51-yard punt return in the first quarter.

Juchno, who threw for 160 yards and a pair of scores after tossing four touchdowns last week, connected with Matthew McGregor on a 12-yard scoring strike to make it 21-0, and the Trojans were well on their way.

Juchno added a rushing touchdown, as did Justo Rivera.

HARBOR CREEK, Pa. – After throwing for five touchdowns in Week 1, Huskies’ senior quarterback Casey Smith tossed three more to go with 179 yards through the air as his team improved to 2-0 with a blanking of North East.

Two of those touchdowns went to brother Cody Smith, who had 97 yards receiving.

Harbor Creek is much more than just a passing team, however, as Cam Williamson rushed for 200 yards and a pair of scores of his own.

Ryan Whitman hauled in a 47-yard touchdown pass from Casey Smith, and the Huskie defense was dominant in keeping the Pickers’ off the scoreboard.

CORRY, Pa. – Jaxon Scrutchins scored three touchdowns (2 rushing, 1 receiving) and Jared Ivarone-Campbell had 190 yards on the ground and a pair of scores in the Lancers’ shutout Region 6 win.

Ivarone-Campbell carried the ball for 190 yards and scoring runs of (1 and 10 yards), while Scrutchins added a touchdown reception from Matt Leehan of 24 yards. It was Leehan’s only pass attempt of the game.

Nathan Lesher threw for 106 yards for Corry, as the Beaver rushing attack couldn’t get going against a strong GM defensive front.

ERIE, Pa. – Michael Parks had a monster game for Cathedral Prep, rushing for 257 yards on 19 carries and scoring three touchdowns as the Ramblers rolled past Erie High.

Tamar Sample threw for two touchdowns and ran for another for Prep (2-0), white Andrew Roach had a receiving touchdown and a pick six.

Erie actually led 12-6 in the second quarter on a 50-yards touchdown run from Steve Smith and a touchdown pass from Jahlil Grandberry to Jamari Gilmore.

FAIRVIEW, Pa. – Travis Burge scored on a 7-yard touchdown run in the fourth quarter to lift Fairview to its first win of the season, 21-14 over Girard in Region 7 action.

The Tigers actually led 14-0 in the first half, but the Yellow Jackets (1-1) rallied to tie the game on runs by Austin Barrett and Todd Essman.

Essman led Girard with 80 yards rushing, while Jared Gennuso had 87 for Fairview.

After a Sharon field goal, Henwood busted off three consecutive rushing touchdowns, including a 73-yarder as the Hornets broke the game open.