Sept. 18, 2020 D9 Football Recaps: Lent Leads Smethport to Win in One of Number of Northern Blowouts 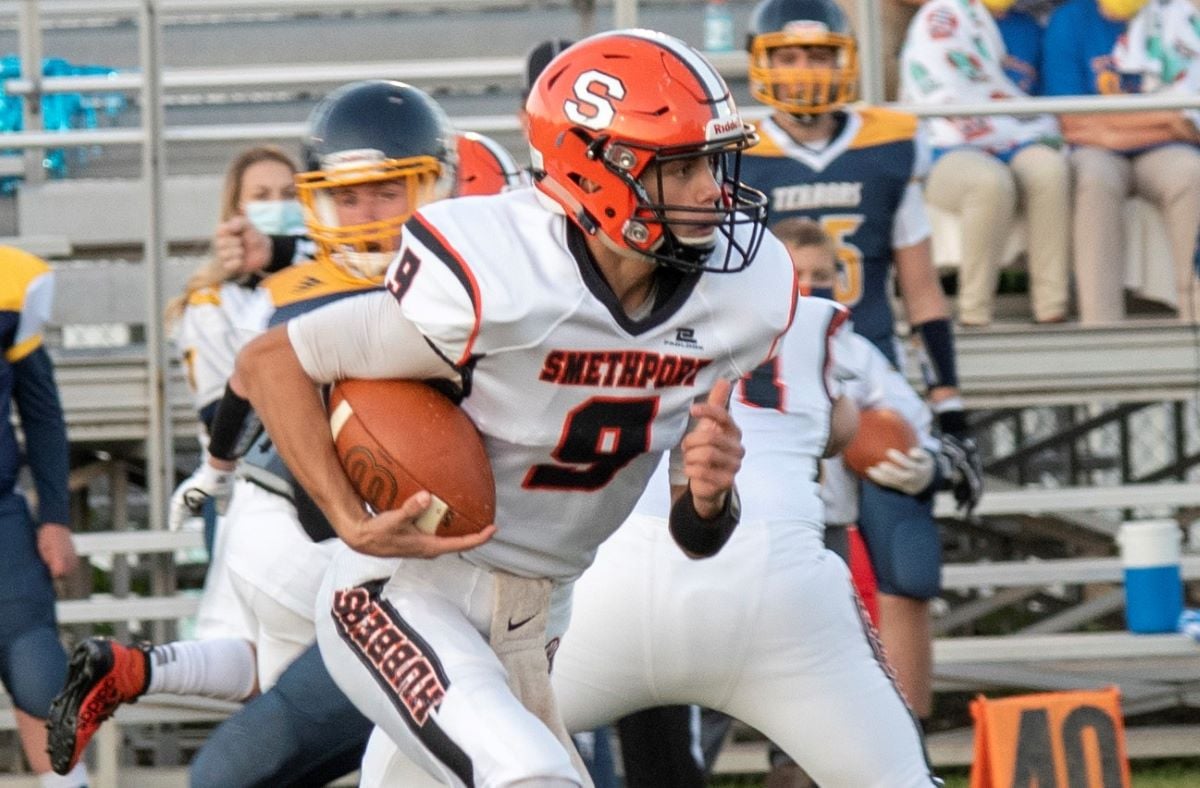 DUKE CENTER, Pa. – Noah Lent accounted for 256 yards of total offense and five touchdowns to lead visiting Smethport to a 60-6 win over Otto-Eldred.

Cole Sebastian was 14 of 31 for 108 yards passing and a touchdown for Otto-Eldred (0-1) while Ethan Smith caught nine passes for 63 yards and the score.

STRATTANVILLE, Pa. – A team with ties to Clarion Borough has been the kryptonite for the Brookville football team over the last decade.

But all that changed Friday night thanks to Jack Krug and Braiden Davis in a 49-30 win over Central Clarion County at Clarion-Limestone.

Going into the night the Raiders (2-0) had lost nine straight games to a team that involved Clarion High School and 11 of 13nd had come within single digits since beating Clarion 13-12 in 2011.

Brookville (2-0), which trailed 23-22, scored the final 19 points of the game after Clarion tied the game at 30 on a Cal German to Ethan Burford touchdown pass late in the third quarter.

Krug hit Kyle MacBeth with a 9-yard scoring pass on the first play of the fourth quarter to make it 36-30 and then hit Brayden Kunselman with an 8-yard scoring pass with 4:22 to play to seal the win before Robert Keth scored on a late run.

Kunselman caught five passes for 87 yards and two scores, while MacBeth had three catches for 60 yards and the score. Keth also scored twice on the ground and ran for 26 yards on six carries and caught four balls for 42 yards.

German was 16 of 34 passing for 217 yards and four touchdowns while throwing an interception on his final pass of the night for the Wildcats (1-1).

Burford caught three passes for 30 yards and the touchdown, while Cutter Boggess had seven catches for 116 yards and a touchdown. Breckin Rex (3 catches for 43 yards) also caught a scoring pass as did Christian Simko (1 catch, 16 yards). Boggess ran nine times for 49 yards while Rex ran eight times for 31 yards, but Central Clarion County ran for just 107 yards on the night.

Keck ran for four scores and threw for two more in the victory while going 4 of 6 passing for 136 yards and rushing eight times for 180 yards.

Evens had a strong game going 16 of 28 for 231 yards and the score while also throwing an interception. Ayers caught six balls for 88 yards and the touchdown, while Noah Archer pulled down seven catches for 118 yards.

On defense, Cale Ayers had 6 ½ tackles with two sacks for Coudersport, while Blaine Moses had a game-best 11 ½ tackles for Port Allegany (0-1).

KNOX, Pa. – In a defensive struggle, Caiden Rainey’s 10-yard touchdown run on the first drive of the second half proved to be the difference in a 14-7 Union/A-C Valley victory at Keystone.

The game was tied at seven at halftime before Union/A-C Valley (2-0) took the opening second-half kickoff and drove 67 yards to take the lead. An 18-yard pass from Tanner Merwin to Rainey on third-and-17 at the start of the drive was the big play on the go-ahead touchdown possession.

Keystone led 7-0 at the end of a quarter thanks to a 5-yard Bret Wingard to Nick Weaver.

The Panthers (1-1) looked poised to go up 14-0, but on a fourth-and-3 play from the Union/A-C Valley 25-yard line Kylar Culbertson picked off a Wingard pass and went 76 yards untouched to tie the game at seven.

Keystone had one final chance to tie the game, but the Falcon Knight defense forced two straight incompletions after the Panthers had moved to the Union/A-C Valley 40-yard line late in the game.

The Panthers outgained the Falcon Knights 271-193 in the loss.

Merwin led Union/A-C Valley with 104 combined yards of offense. He was 5 of 13 passing for 57 yards and ran nine times for 47 yards. Rainey added seven carries for 28 yards and caught two passes for 28 yards, while Culbertson had six totes for 41 yards.

Culbertson had seven tackles while Carter Terwint had nine and Karter Vogle, who was named the Jim Kelly Allegheny Grille of Foxburg Player of the Game, six including at least four key stops.

Wingard was 15 of 28 for 157 yards, the touchdown and two interceptions with Weaver catching six passes for 74 yards for Keystone. Weaver also ran 12 times for 34 yards.

Taylar Altman ran for a team-best 45 yards on eight carries.

NEW BETHLEHEM, Pa. – In a defensive battle, Redbank Valley held off Brockway for a 21-7 victory in New Bethlehem.

The Bulldogs led 13-7 at halftime before putting the game away with 1:24 to play when Gunner Mangiantini hit Marquese Gardlock with a 22-yard scoring pass.

Ray Shreckengost (6-yard run) and Hudson Martz (3-yard run) had given the Bulldogs (2-0) at 13-0 lead late in the first half before Conner Ford hit Ben Glasl with a 13-yard scoring pass with a second left in the half to close the Rovers within six at the break.

Martz ran for 88 yards on 19 carries and Shreckengost added 62 yards on eight totes for the Bulldogs, who outgained Brockway 279-139. Mangiantini was 6 of 14 passing for 91 yards, the touchdown and an interception, and Gardlock caught three passes for 64 yards and the score.

PUNXSUTAWNEY, Pa. – Mason Merschimer scored on a late third-quarter touchdown to lift Moniteau to a come-from-behind 21-14 win at Punxsutawney.

Mershimer scored twice on the night and rushed 17 times for 175 yards, while J.D. Dessicino added 14 carries for 72 yards and a touchdown and David Stamm added nine carries for 86 yards while playing a big role on defense with eight tackles and two interceptions. Mershimer added six stopes as did Dessicino, while Connor Kline had eight tackles and a sack and Colton Thomas recovered three fumbles.

The Gremlins (2-0) onslaught came after the teams traded touchdowns in the games’ first 4 ½ minutes.

Jayce Anderson and Luke Garing each scored twice during the blitz with Anderson scoring on runs fo 46 and three yards at the start of the 49-point run and Garing adding third-quarter touchdowns run of 26 and 16 yards.

Cole Coon (8 yards), Brayden Christie (26 yards), Eric Booher (16 yards) and Zach Blair (4 yards) also scored on the ground for Karns City, which racked up 308 yards on the ground on 43 carries, an average of 7.2 yards per carry. The Gremlins attempted just three passes on the night with Booher going 1-for-3 with a 15-yard completion to Micah Rupp.

Cam-Ron Hayes hit Dalton Yale with a 37-yard scoring pass for DuBois (0-2), while Austin Mitchell found Dale Kot from 32 yards out late in the game for the Beavers other touchdown.

DuBois was held to 53 yards on the ground and 163 for the game with Hays going 12 of 23 passing for 131 yards, the touchdown and two interceptions. Kot had four grabs for 59 yards and Dalton Kale three for 55. Austin Henery ran five times for a team-best 39 yards.

Coudriet, who was 22 of 31 passing, hit Bryce Walker and Michael Fitzgerald twice each for scoring plays with Walker catching seven balls for 105 yards and Fitzgerald six for 82 yards.

Jacob Kline also scored twice for the Dutch (1-0) finding paydirt with an 11-yard run and a 16-yard pass from Coudriet (Kline ran for 35 yards on 6 carries and caught 3 passes for 28 yards), while Charlie Coudriet, who was 3 of 5 passing for 36 yards, hit Carter Chadsey with a 3-yard scoring pass and Justin Dornisch scored on a 10-yard run.

St. Marys also scored twice on defense with Terry Williams returning an interception 27 yards for a touchdown and Clay Grazioli returning a fumble 20 yards for a score.

Bradford got a 78-yard Austen Davis to Dalton Dixon touchdown pass and a 23-yard Elijah Fitton touchdown run for its two scores.

Davis was 11 of 20 for 109 yards, a touchdown and an interception with Dixon’s long score being his lone catch.

RIDGWAY, Pa. – Ridgway built a 17-0 third-quarter lead and then held off a comeback attempt by Kane to pick up a 17-14 win over the visiting Wolves in Ridgway.

Aiden Zimmerman’s 25-yard field goal proved to be the difference in the game, but two big defensive plays helped set up the victory.

Ridgway (1-0) recovered a pair of Kane (0-1) fumbled deep in Wolves territory to score their two touchdowns.

Dan Park recovered a fumble at the Kane 10-yard line early in the game leading to a Cameron Marciniak 5-yard touchdown run before Zimmerman booted a field goal early in the second half to make it 10-0 at halftime.

Park then recovered another fumble, this time at the Kane 20-yard line, leading to a 17-yard touchdown run by Ben Briggs with just over four minutes left in the third quarter to put the Elkers ahead 17-0.

But Ridgway’s defense was able to hold from there and then the Elkers offense ran off the final three minutes to close out the victory.

HYDE, Pa. – A Covid-19 issue forced the postponement of the Tyrone at Clearfield game Friday. There is no word if the game will be made up.

District 10 Week 2 Recaps: Oil City, Wilmington Win Marquee Matchups
Sept. 19, 2020 District 10 Football Recaps: Northwestern, Fort LeBoeuf roll
We use cookies on our website to give you the most relevant experience by remembering your preferences and repeat visits. By clicking “Accept All”, you consent to the use of ALL the cookies. However, you may visit "Cookie Settings" to provide a controlled consent.
Cookie SettingsAccept All
Manage consent