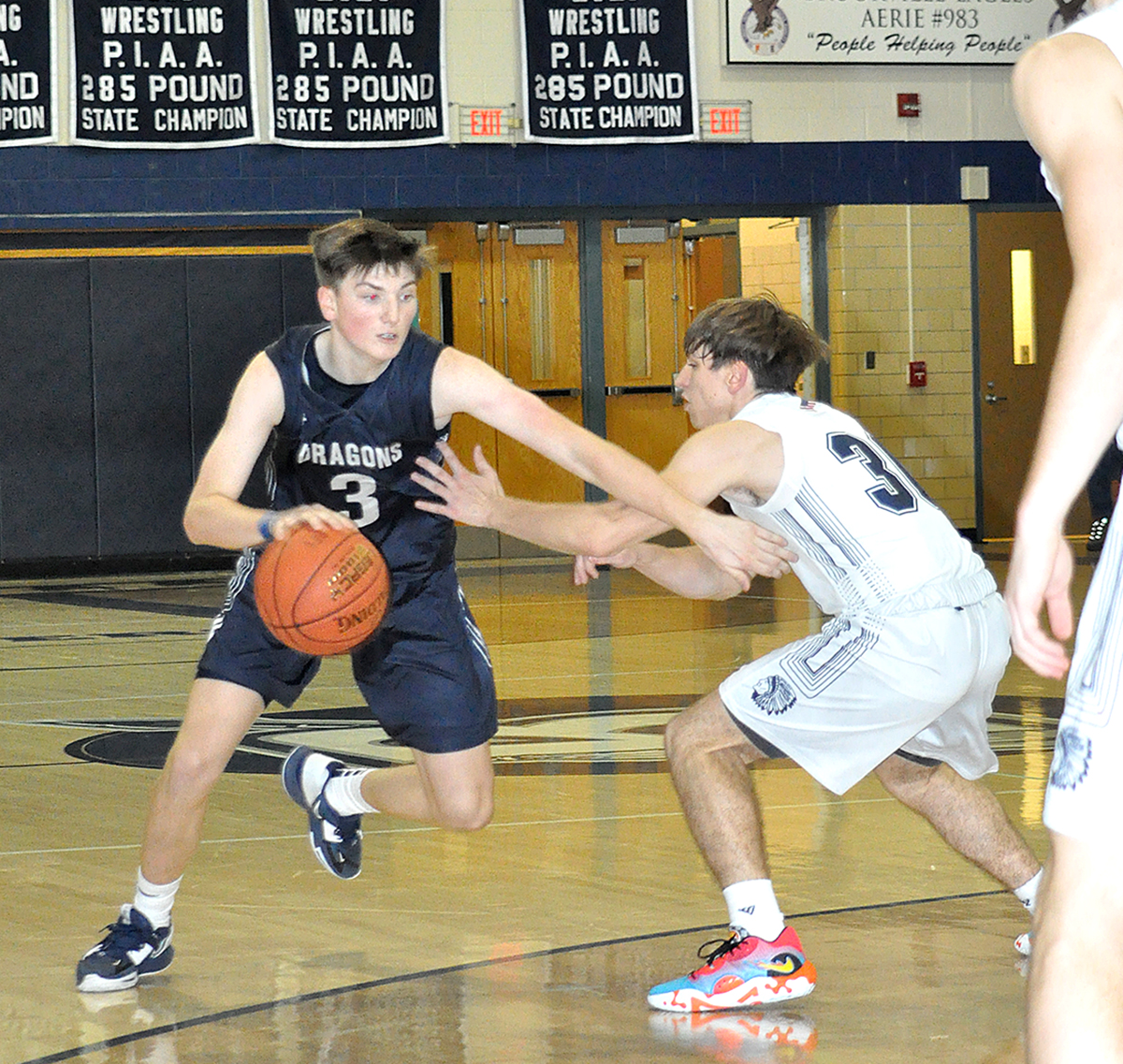 HARBORCREEK, Pa. – Warren’s Brady Berdine scored a career-high 25 points, including a game-winning runner in the lane as time expired to lift Warren to a 63-61 win over Harbor Creek.

Berdine scored 13 of his 25 points in the second half and was 8-of-8 from the free-throw line.

Nick Krahe nearly had another double-double for Harbor Creek, scoring 20 points and pulling down nine rebounds.

Krahe was one of three Harbor Creek players in double figures, as JT Delsandro added 15 points and Dylan Chatwek 11.

Damon Curry scored six of his team-high 19 points in the fourth quarter for Franklin, while Jalen Wood had 11 of his 16 points in the second half.

Brayden McCloskey scored 12 of his 19 points in the first half for Reynolds, while Haydin McLaughlin added 12.

A 22-point third quarter helped the Braves get some breathing room in the second half.

Colton Carpenter had 17 of his 21 points in the second half for Iroquois.

LINESVILLE, Pa.- Conneaut jumped out to a 16-7 lead in the first quarter and led throughout in a 50-34 victory over Union City.

Brett Loughry drilled a pair of first-half 3’s and led a balanced Grove City effort with 15 points. Nathan Greer scored six of his 12 points in the first quarter for the Eagles, while Langdon Ferguson netted 10 points.

The unbeaten Trojans got a balanced scoring effort, as Kamden Kramer and Tyler Grove netted 12 points each.

BROOKVILLE, Pa. – Clayton Cook scored eight of his game-high 20 points in the first quarter, as Brookville used a quick start to run past visiting Cambridge Springs, 58-28.

Behind the play of Cook, who was named the Allegheny Grille of Foxburg Player of the Game, Brookville led 14-5 at the end of eight minutes and then expanded the lead to 32-17 by halftime with Cook pouring in 12 first-half points.

Listen to Cook talk about the win and his performance

TITUSVILLE, Pa. – Manny Perez exploded for a career-high 39 points to lead Titusville to a 55-48 win over visiting Sheffield.

Perez hit seven 3-pointers and scored 14 of Titusville’s first 16 points and 24 of the Rockets’ 32 first-half points.

Despite Perez’s heroics, Titusville led by just seven, 32-25, at halftime and saw Sheffield get back within five, 40-35, by the end of the third quarter.

HERMITAGE, Pa. – New Castle outscored Hickory by seven in the third quarter to take a 14-point lead on its way to a 62-51 win over Hickory.

Jon Anderson scored 16 of his game-high 29 points in the second half for Hickory, while Isaiah Boice had 18.

Stringert was 12-of-12 from the free-throw line in the win.

Jake Mattocks had a game-high 16 points for Mercer, while Daemyin Mattocks added 11.

HERMITAGE, Pa. – Rick Mancino made his return as head coach, but it was Quaker Valley that came away with a 42-39 victory.

Levi Hailstock had 13 points and Remington Hart had nine for Kennedy Catholic.

ALBION, Pa. – Jackson Dailey poured in 22 points as General McLane rolled to a 66-31 win over Northwestern.

Ronan Doler had 18 points and Dom Russo 14 for LeBoeuf.

Deaja Williams scored 13 of her 16 points in the first half to lead Erie, while Aubrey Neavins added 10.

JAMESTOWN, Pa. – Iroquois outscored Jamestown 13-0 in the fourth quarter to earns its first road win in over two years, per Erie News Now’s John Lydic, with a 28-14 win over Jamestown.