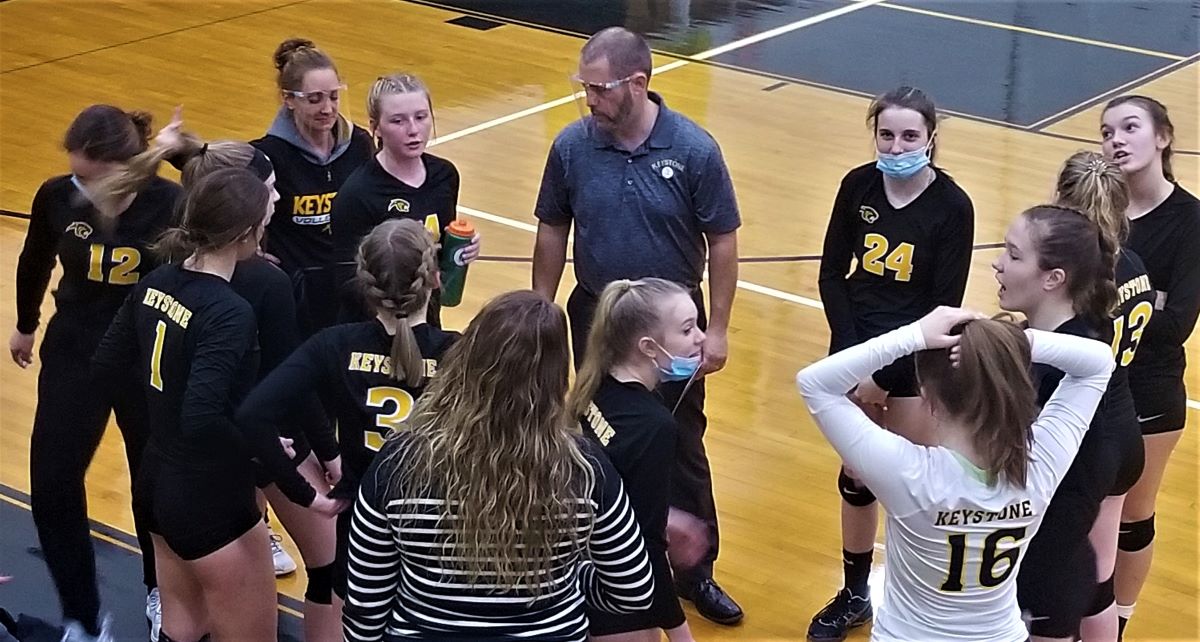 Weaver’s serving was part of an overall strong performance, as she also had 10 set assists in the victory.

She set the tone early in serving with three aces right out of the gate helping Keystone to a 6-0 advantage in the first set, a set in which the Lady Panthers never trailed nor were tied in.

“She’s my go-getter,” Mong said. “I can always count on Alyssa. She never quits until that ball is down. She’s just a fighter. For a little girl that she is, she has a whole lot of spunk. I’m proud of how she came out tonight.”

Altman was Keystone’s top hitter on the night with five kills, while Leah Exley and Jozee Weaver each added four kills and Sydney Bell and Natalie Bowser three each. Exley also had six blocks, including a pair in the third set.

“She can get up with just about anybody in the conference,” Mong said of the sophomore Exley. “I think she proved that tonight a little bit.”

Emma Burrows led the defensive effort for Keystone with 21 digs.

Moniteau’s best chances came in the second set when it races out to a 7-0 lead only to watch Keystone go on a 10-1 run led by a pair of aces from Altman and a pair of kills from Bowser to take a 10-9 lead.

The Lady Warriors fought back and scored five of the next six points thanks in part to kills from Pry and Ivie Scott to go back ahead, 13-11.

Moniteau tied the set twice more – once at 17 on a Pry kill and again at 18 on a hitting error by Keystone, but a kill by Altman put the Lady Panthers in the lead for good on their way to the 25-21 win.

Just like in the first set, it was Alyssa Weaver’s serving that set the tone of Keystone in the third set, as she started the set with back-to-back aces, and Keystone scored 11 of the first 15 points in the set.

Moniteau tried to fight back following a time out going on a 5-0 run thanks to four Keystone hitting errors and a net violation on the Lady Panthers. But an error on Moniteau ended that run, and then Jozee Weaver delivered two aces sandwiched in between an Altman kill to push the lead to 16-9, and the Lady Warriors never were able to push back.

Keystone will host third-seeded Punxsutawney, a 3-0 win over Karns City, in the semifinals at 6:30 p.m. Monday, Nov. 2.

“Volleyball here hasn’t been in the playoffs for a long time,” Mong said. “I can’t even remember the last time we probably won a playoff game, let alone host it. Now that we get to do two, the girls are excited. It helps out them and their emotions pretty well. They feed off the crowd and being able to play for families. They are very excited tonight.”

Madi Fye also a terrific night for Punxsutawney with nine aces and seven digs, and Lizzie Neal added a pair of blocks.

Danielle Griebel ran the offense for the Lady Chucks with 13 set assists.

Punxsutawney is scheduled to play at Keystone at 6:30 p.m. Monday, Nov. 2, in the semifinals. The second-seeded Lady Panthers beat Moniteau, 3-0.

The Lady Tide, whose Ipad died and wouldn’t give stats, will travel to top-seeded Redbank Valley for a 6:30 p.m. semifinal match Monday, Nov. 2.

Emma Ely ran the offense with 32 set assists and added 24 digs and a kill, Ronnie Costazo had 22 digs and an ace, and Kelsie Alexander had 18 digs.