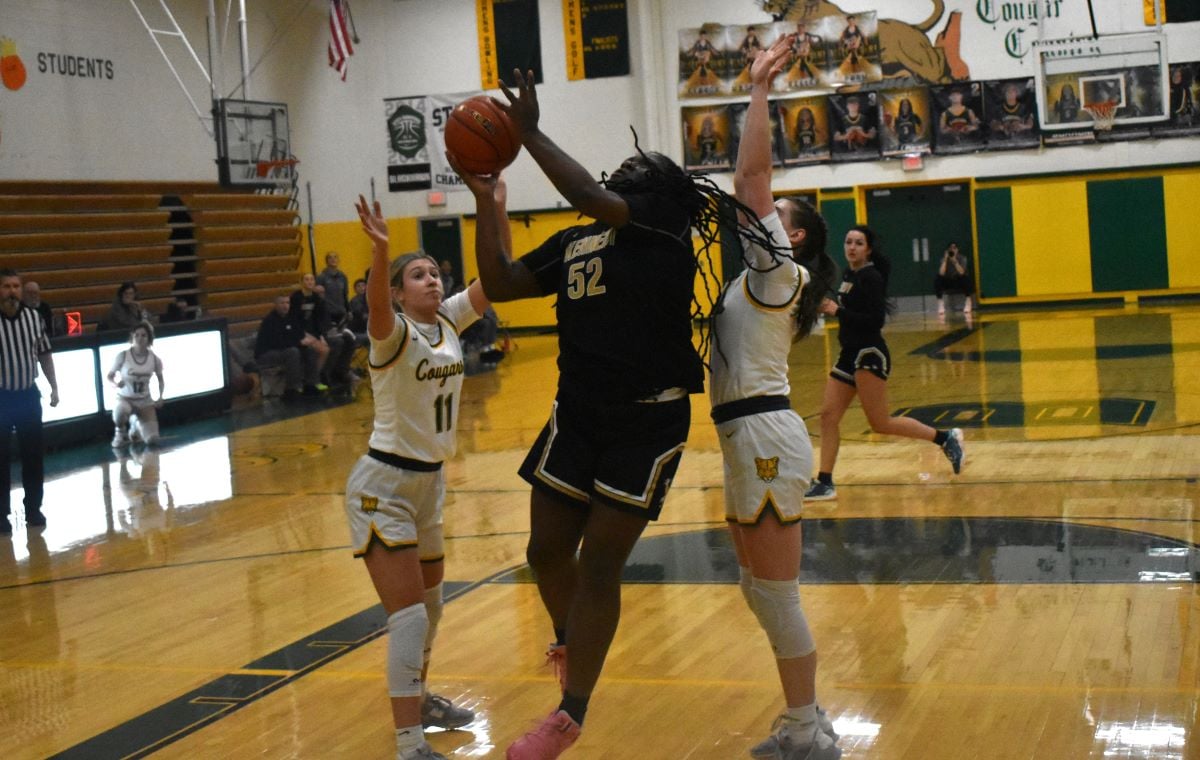 Kennedy Catholic's Layke Fields goes up for two of her 25 points during Tuesday's double-overtime win against Blackhawk.

BEAVER FALLS, Pa. – Being down 12 on the road in the second half against one of the top Class 4A teams in the state proved to be no problem for Kennedy Catholic.

Layke Fields scored 25 points and Bella Magestro knocked down a pair of free throws with 5.2 seconds left in double-overtime to lift Kennedy Catholic to a 55-53 triumph over Blackhawk.

Blackhawk twice had the ball at the end of regulation and the first overtime with shots to win the game (the latter of which saw them hold the ball for the final 1:40 of overtime), but each time the Golden Eagles (10-4) defense was up to the challenge.

It was that defense that allowed them to get back into the game in the second half.

“Being down 12, we always talk about how we rely on our defense,” coach Justin Magestro said. “Our defense can get us where we want to go. We hang our hat on our defense and they stepped that up and played together as a team.”

A Kassie Potts 3 gave Blackhawk (14-2) a 41-30 lead with 2:20 to go in the third quarter. Kennedy Catholic yielded just three more points the rest of regulation to force overtime.

KC went on a 12-0 run to take a 42-41, a run that included a triple from Monique Vincent and a traditional 3-point play from Fields.

Blackhawk was unable to close out the game at the free throw line, however, and Fields tied it up with 25 seconds left in regulation.

Borroni’s deep 3 at the buzzer was well off, sending the game to overtime.

Alena Fusetti, who led Blackhawk with 17 points, knocked down a pair of free throws to give the Cougars a 46-44 lead with 3:41 to go in the first overtime.

Fields once again had the answer, tying the game up with 1:47 to go.

Blackhawk then held the ball for the remainder of the first overtime, with Fusetti’s jumper hitting off the front of the rim, sending the game to overtime number two.

“We know we can come back,” Fields said. “We were down, but we were able to stay together to get the win.”

Keith knocked down a 3 to start the second overtime, which was immediately answered by a triple from Potts.

Field and Vincent had back-to-back buckets in between a Borroni free throw made it 53-50.

Fusetti got Blackhawk within one, 53-52 on a layup with 1:02 to go. Blackhawk got the ball back after Keith missed the front end of a 1-and-1, and Fusetti was fouled and knocked down one of two to tie the game at 53 apiece.

Kennedy pushed the ball down the court, with Magestro getting fouled and sent to the line with just over five seconds to go.

The freshman went to the line for a 1-and-1 and calmly knocked down both free throws to give Kennedy the lead. Potts actually had a chance to tie the game at the buzzer and send it to a third overtime, but her layup came up short.

“We knew coming in here great coach (Steve Lodovico), great traditional winning program, great team,” coach Magestro said. “We don’t look at rankings, but if they (Blackhawk) aren’t ranked in the top five of the state then no one should be, because that team is phenomenal. I want to thank coach for letting us come play. We need games like this. I hope they got something out of it, I know we sure as heck did. Just blessed to be able to come down here.”

The game was back-and-forth throughout much of the first half until Blackhawk went on a 14-5 run to close the half to go up 30-18. It was a run that included a pair of 3’s from Fusetti.

Borroni had 16 points for Blackhawk and Potts 14.

“Mo Vincent did a phenomenal job of slowing the game down,” coach Magestro said. “We didn’t want to get into a running match with them. Hayden, all year we’ve been waiting and in the last three games, she’s really been making shots. We run a lot of different sets. We have a lof of high IQ girls and we feel confident getting into a half-court game.”