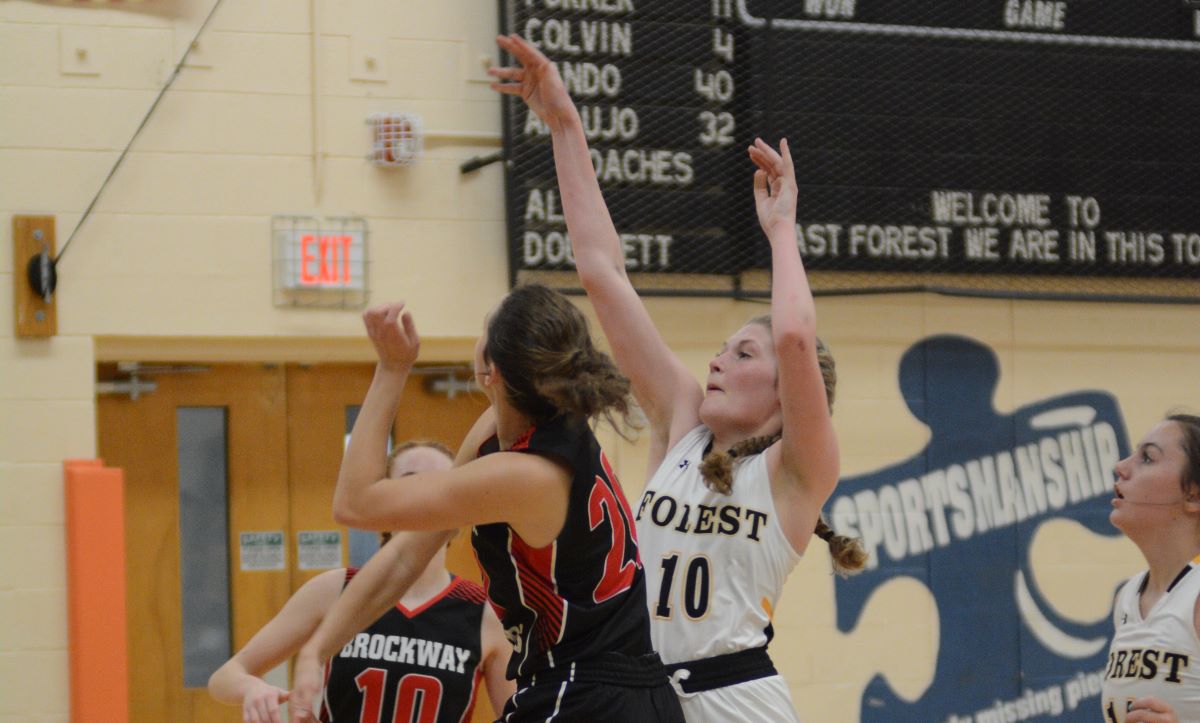 MARIENVILLE, Pa. – Amber Guzzi scored six of her 10 points in the fourth quarter to help Forest Area pull away from A-C Valley for a 36-28 KSAC Small School win at East Forest.

The Fires led 23-21 going to the fourth quarter before outscoring the Lady Falcons 13-7.

KNOX, Pa. – Shae Pistorius forced overtime with a free throw with 10 seconds left in regulation, and Brooklyn Taylor scored four points, all from the line, in the extra session to help Karns City escape Keystone with a 38-33 win.

Pistorius’s charity shot tied the game at 31, and the Lady Gremlins then hit five overtime free throws while outscoring Keystone 7-2 in extra time.

The game was a low-scoring affair throughout with Karns City leading 10-6 at the end of eight minutes and 16-12 at halftime before Keystone took a 25-24 lead at the end of the third quarter.

Six Natalie Bowser third-quarter points helped the Lady Panthers turn the game around in the quarter, while Jill Winters scored all five of her points in the frame.

Bowser had a game-high 14 points for Keystone with Emma Gruber chipping in with eight tallies.

ULYSSES, Pa. – Northern Potter used a strong first half to build an 11-point halftime lead then held off a strong Smethport charge in the third quarter to pick up a 39-33 home NTL win.

The Lady Panthers led 19-8 at the break thanks to a strong first quarter from Kayden Brown, who scored eight of her nine points in the frame.

Smethport came charging back in the third quarter outpacing Northern Potter 16-10 in the frame behind six points each from Elizabeth Hungiville and Jaidyn Goodman, with Goodman hitting a pair of 3-pointers out of the halftime locker room.

The Lady Raiders led 6-4 at the end of the first quarter but outscored the Lady Panthers 24-13 over the next two quarters to take control of the game.

Aubree Lorenzo had a big game for Cameron County with 16 points and six rebounds with Ava Hilfiger adding a double-double of 13 points and 10 boards.

Navaeh Spaeth also had 10 rebounds in the win while Renee Earle scored six points and Trinity Earle had five points and seven rebounds.

CLARION, Pa. – A slow start didn’t slow down North Clarion, as the She-Wolves rebounded from their first loss of the season to beat homestanding Clarion, 62-28, in KSAC Small School play.

North Clarion led the shorthanded Lady Cats, who once again were playing without one of their top players, Taylor Alston (ankle), by just three points, 12-9, at the end of the first quarter.

But four different players scored in the second quarter, including a 3-pointer from Akeela Greenawalt and four points from Lauren Lutz to expand the lead to 23-15 at halftime.

Things really got rolling for the She-Wolves in the third quarter when they scored 17 points behind six from Lily Homan and five from Ainsley Hartle to expand the lead to 18, 40-22.

Lutz, who also scored four points in the third quarter, finished with a game-high 16 points for North Clarion with Homan adding 15, 11 after halftime. Hartle chipped in with seven tallies.

SHINGLEHOUSE, Pa. – Visiting Otto-Eldred built a 12-point halftime lead before outscoring Oswayo Valley by 14 points in the third quarter on its way to a 48-27 win in NTL action.

The Lady Terrors, still unbeaten in league play, led 22-12 at the break before outscoring the Green Wave 20-6 in the third quarter.

Katie Sheeler scored nine of her game-high 20 points in the third quarter while Brooke Close added five of her nine tallies.

Harmon led the Lady Bulldogs with 17 points with Harmon adding 15.

PUNXSUTAWNEY, Pa. – It was a career night for Riley Doverspike whose first-career double-digit game resulted in a game-high 18 points to go with six seals in Punxsutawney’s 66-27 rout of visiting Brookville in D9 League action.

Chloe Presloid added 16 points, six assists, five rebounds, and two steals for the Lady Chucks, who led 25-5 at the end of the first quarter.

The Lady Dutch led 14-0 at the end of the first quarter and also shut out the Lady Elkers in the fourth quarter.

Strong Second Quarter Helps Clearfield Boys to Win; Jburg Gets Key Victory over Sheffield
Comeback Kids: Kennedy Catholic Girls Rally From Double-Digit Deficit to Stun WPIAL Power Blackhawk in Double Overtime
This website or its third-party tools process personal data.In case of sale of your personal information, you may opt out by using the link Do not sell my personal information.
×
Manage consent