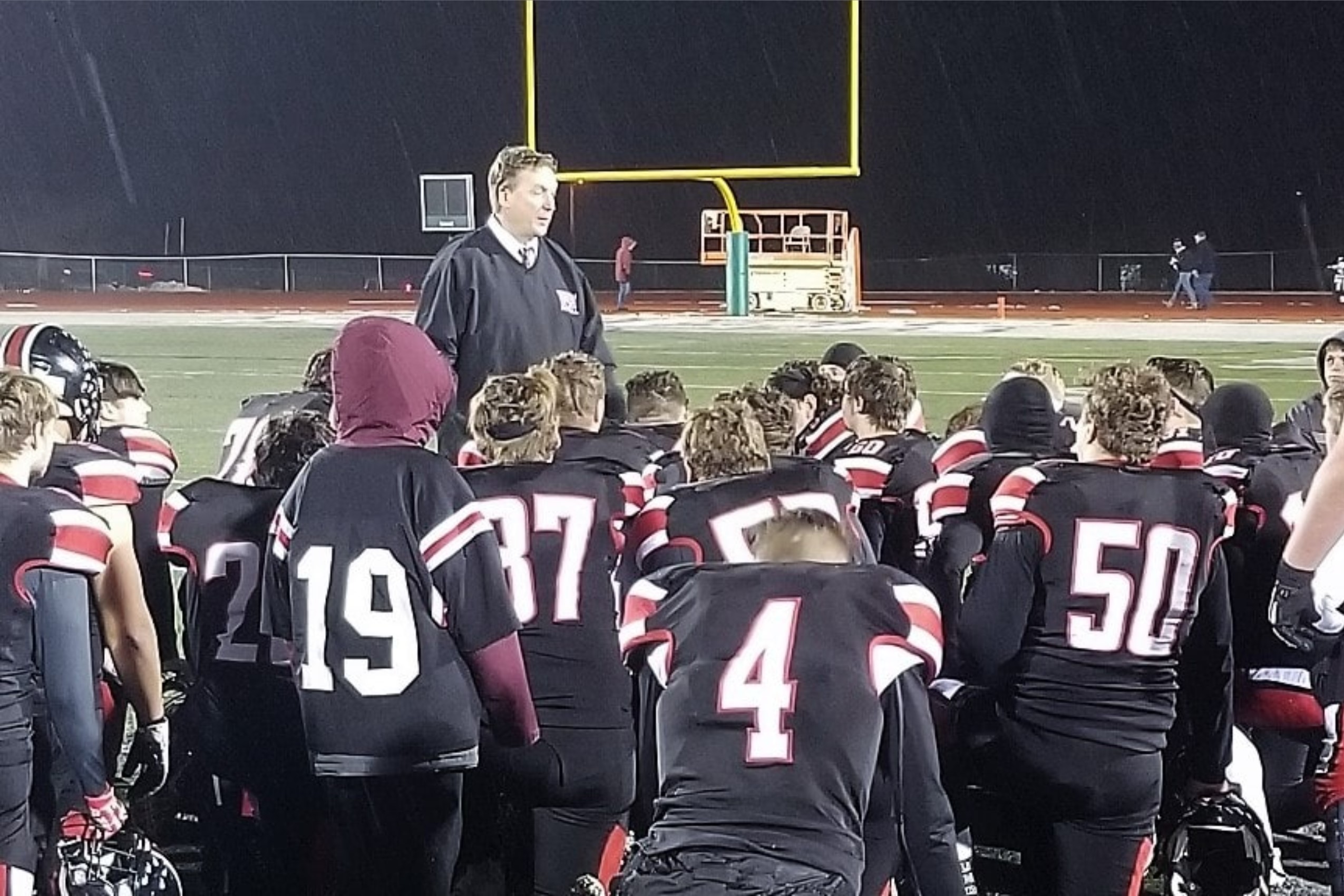 Clearfield head coach Tim Janocko, talking to his team after a game, has his Bison taking on District 5's unbeaten Bedford Bisons Friday night at the Bison Sports Complex.

HYDE, Pa. — There’s never been a Bison vs. Bisons matchup on the football field and the first one will determine a state playoff berth.

It’s the Clearfield Bison vs. Bedford Bisons Friday night at the Bison Sports Complex with a 7 p.m. kickoff. The sub-regional final between the District 9 Class 3A champions coming off a 40-31 win over St. Marys last week faces the District 5 Bisons of Bedford, which had no opponent to face for a district title.

Clearfield, which went by Bisons as well until the last handful of years, takes a 4-1 record into the game while Bedford is 7-0. Friday’s winner gets the District 6 champion — Tyrone plays Central-Martinsburg Saturday at Altoona’s Mansion Park at 7 p.m. — Nov. 6 or 7 at a site and time to be determined.

The Bison had a slow start to the season, considering they were 1-0 going into October. After opening with a 27-0 win over Penns Valley in their opener, two weeks were postponed due to COVID-19 concerns.

A win over Philipsburg-Osceola (42-6) was followed by their only loss at Central-Martinsburg, 25-21, on Oct. 9. The Bison wrapped up their “regular season” with a 42-14 rout of Huntingdon before beating St. Marys last week.

Clearfield head coach Tim Janocko heads into the game with a 293-115-3 career record, the most wins ever by a D9 coach. His Bison lost to Bellefonte in last year’s D6-9 Class 3A final after beating the Red Raiders in 2018 before to earn the last trip to the state tournament, which ended the next game with a 55-21 loss to Cathedral Prep.

This year’s abbreviated schedule has the Bison averaging 325 yards per game offensively — 190 passing, 135 rushing — with junior quarterback Oliver Billotte leading the way. He’s thrown for 921 yards (56-for-98) with 11 touchdown passes and three interceptions. Billotte also leads the team in rushing with 202 yards on 39 carries with five TDs.

Bedford won last year’s District 5/8 Class 3A sub-regional title in a 26-0 win over Westinghouse — Clearfield was in Class 4A — and then dropped its state opener to D6 champion Bald Eagle Area, which had beaten Clearfield 36-28 during the regular season.

The Bisons have much of their roster back from last year’s run as they average 41.3 points and 394 yards of offense per game — 239 rushing and 155 passing.

Semifinal Friday in District 10: Class 1A, 3A Teams Take Center Stage
D9 Class 2A final: Raiders, Gremlins rematch
We use cookies on our website to give you the most relevant experience by remembering your preferences and repeat visits. By clicking “Accept All”, you consent to the use of ALL the cookies. However, you may visit "Cookie Settings" to provide a controlled consent.
Cookie SettingsAccept All
Manage consent