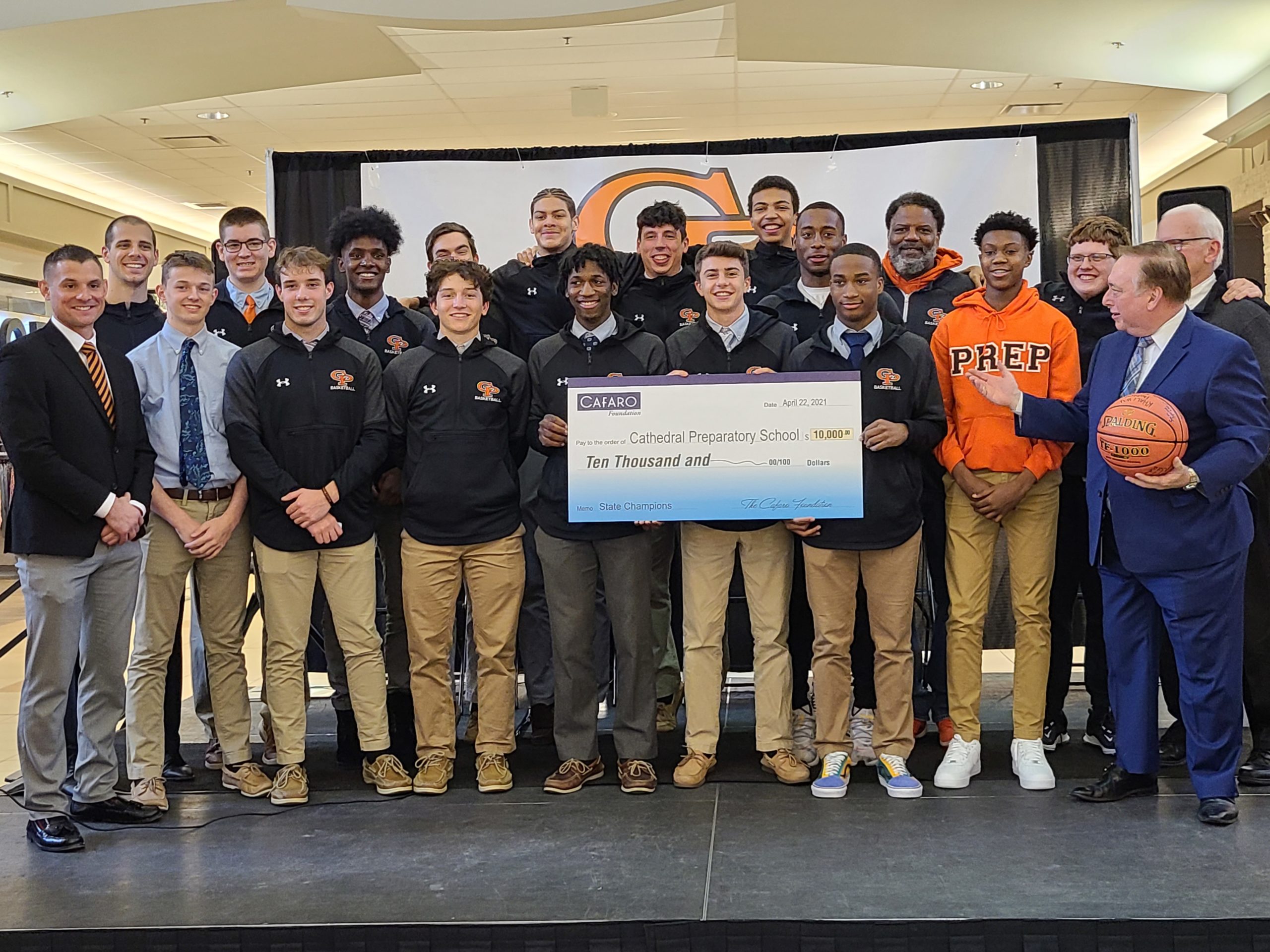 The Cathedral Prep boys' basketball team celebrated its 2021 state championship with the Erie community on Thursday at the Millcreek Mall.

ERIE, Pa. – It didn’t matter that few outside their locker room expected the Cathedral Prep boys basketball team to win a state championship.

They believed in each other, and on Thursday, they got to celebrate that championship with the Erie community at the Millcreek Mall.

“This whole season is a lesson in sticking to the plan and working through hardships,” said the school’s Interim President, Dave Slomski. “You hear it so often, you wonder, does it ever pay off? You guys are truly an example of that. You’re a credit to yourselves, your families, and our school.”

Slomski was one of several speakers, as well as Athletic Director Bill Flanagan, head coach Steve Piotrowicz and Joe Bell of the Cafaro Foundation, which made a generous donation to the school.

“It’s awesome for the kids,” Piotrowicz said. “This is a once-in-a-lifetime opportunity for them. From a coaching standpoint, you hope to get to do this a couple of times. For this group of young men, they’ll be able to cherish this for the rest of their life, and I think it’s just starting to hit them now that they are state champs.”

It’s a Rambler team that overcame a good deal of adversity to reach the pinnacle at Hershey’s Giant Center.

They followed that up with a subregional win over DuBois (47-34) and a stunning overtime victory over WPIAL champion New Castle in the PIAA quarterfinals, 52-50.

It was at that point, they felt like they could win gold.

“We felt like after we beat New Castle, we had a real chance to win the state championship,” said senior Liam Galla, the D9and10Sports.com/All American Awards & Engraving District 10 Player of the Year. “After we won our D10 game too we had a lot of momentum, we were riding high and we felt like no one could beat us.”

“At that point in time, internally I had a feeling that that was going to be our toughest game,” he said. “They’re (New Castle) really good, really well-coached. I think once they beat New Castle their confidence just skyrocketed. These kids did an unbelievable job of getting themselves to those positions and executing and making it happen.”

They earned a hard-fought 8-point win over Lower Dauphin in the semifinals before a convincing win over Archbishop Ryan, 69-49 for the gold.

And it’s just starting to sink in.

“Doing stuff like this, I mean, it still hits a little bit more, seeing everyone, doing it all again and celebrating one more time,” said senior Will Innes. “Anytime that we get everyone out here, especially during COVID season, it’s great. Everyone coming to celebrate, I thank them, and it’s a really good time.”

It was a season that started with the Ramblers playing one game (a 59-50 win over McDowell) before the COVID-19 shutdown.

Like other teams, they were forced to play the waiting game.

And, as Piotrowicz alluded to, there were plenty of ups and downs. But the Ramblers overcame those obstacles to claim the ultimate prize.

“They have championship DNA,” Piotrowicz said. “At Prep we pride ourselves on being able to create men, whether it’s on the court, on the field, homework, life, whatever the case may be. These kids have been preparing for that for the last one, two, three, four years. They did an excellent job of staying focused and not letting adversity take its place and rose above.”

And for Piotrowicz, being a Prep alum makes it extra special that he was able to help deliver the program’s first state championship since 1993.

“It’s hard to put into words, honestly,” he said. “I don’t really talk about myself much, it’s all about the kids. With that being said, understanding that this is what I got hired for, understanding the history of this school and the basketball program, and being able to do something that only two other coaches were able to do in the history of this program, it means a lot to me.”

And on Thursday, they got to celebrate the historic accomplishment with a community that is so proud to call them one of their own.