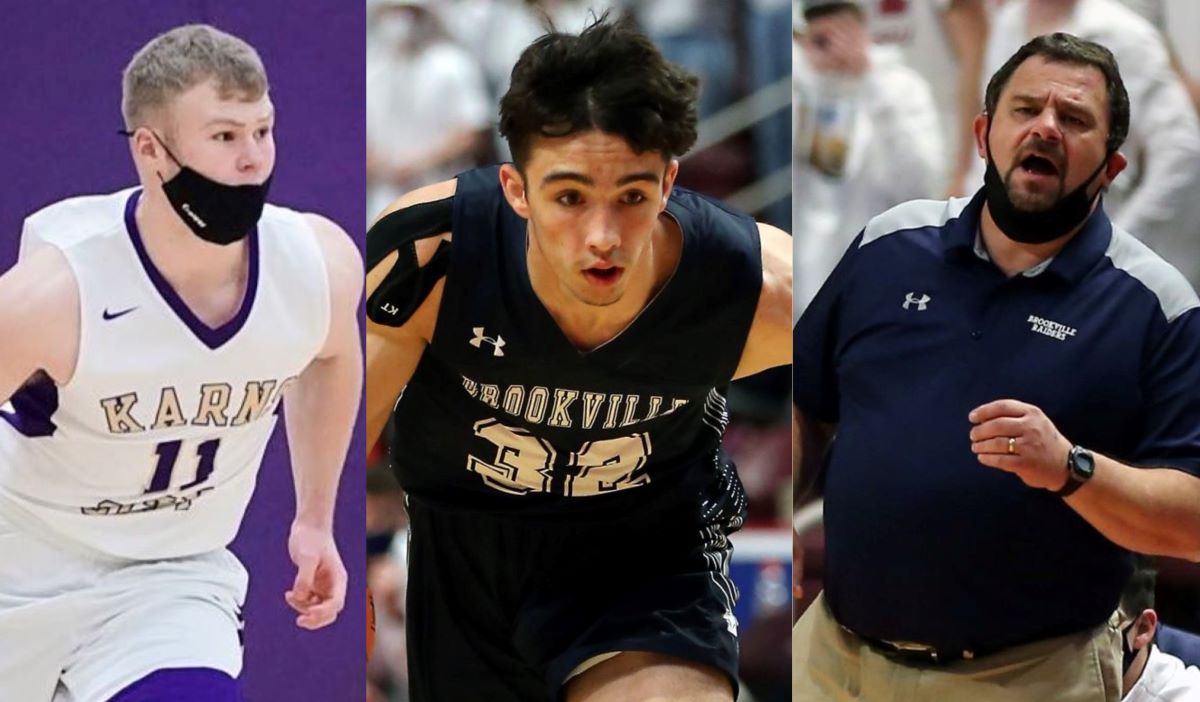 WARREN, Pa. – A player with a drive to win that few have had in the annuals of District 9 basketball, Jace Miner led Brookville to the PIAA Class 3A championship game – the first PIAA title-game appearance in school history.

Miner is the 2021 D9and10Sports.com District 9 Boys’ Basketball Player of the Year Powered by All American Awards & Engraving.

The 6-foot-5 senior, who is headed to Wichita State on a baseball scholarship, averaged 18.8 points, 7.7 rebounds, 3.5 assists, and 1.3 blocks per game. Slicing through defenses like a hot knife through butter, Miner’s patented drive to the hoop helped him shoot 56.9 percent from the field.

Miner’s signature moment came in the PIAA quarterfinals at Ellwood City when, in a tie game with 13 seconds left, he stole an inbounds pass, scored to give Brookville the lead with eight seconds left, and then blocked the Wolverines final shot from inside the paint as time expired.

Park led Brookville to a 23-3 overall record, the District 9 Class 3A title, and the PIAA Championship game. Brookville beat Kane, 69-49, to win the D9 title then topped Chestnut Ridge, 68-58, in the PIAA District 5-9 subregional. Earning a spot against WPIAL Champion Ellwood City, the Raiders won that game on the aforementioned Miner steal, layup, and block, 62-60. Brookville then beat Bishop Guilfoyle, 46-44, to earn a trip to Hershey and the PIAA Championship game, where the Cinderella run came to an end with a 75-53 loss to Loyalsock. The second-place state finish easily was the capper on the best season in school history.

Cramer, the second straight Karns City player to earn District 9 Rookie of the Year honors and the third in four years joining Micah Rupp (2020) and Chase Beighley (2018), had a terrific rookie campaign as a freshman averaging 10.2 points. 3.9 rebounds, and 1.4 assists for the District 9 Class 2A champion Gremlins. He added 17 steals and 12 blocked shots while shooting 41.3 percent from the field.

In addition to the major award winners, the 2021 D9and10Sports.com District 9 Boys’ All-District teams were also named.

2021 D9AND10SPORTS.COM BOYS’ BASKETBALL PLAYER OF THE YEAR POWERED BY ALL AMERICAN AWARDS & ENGRAVING

2021 D9AND10SPORTS.COM BOYS’ BASKETBALL CHUCK DALY COACH OF THE YEAR AS PRESENTED BY THE CHUCK DALY FOUNDATION POWERED BY ALL AMERICAN AWARDS & ENGRAVING

Dalton Park, Brookville: Led Brookville to a 23-3 overall record, the District 9 Class 3A title, and a second-place PIAA Class 3A finish while taking the Raiders to a PIAA championship game for the first time in school history

2021 D9AND10SPORTS.COM BOYS’ BASKETBALL ROOKIE OF THE YEAR POWERED BY ALL AMERICAN AWARDS & ENGRAVING

2021 D9and10Sports Boys’ Bball Awards; All-D10 Powered by All American Awards & Engraving Announced
Championship Celebration: Erie Community Honors State Champion Cathedral Prep Basketball Team
We use cookies on our website to give you the most relevant experience by remembering your preferences and repeat visits. By clicking “Accept All”, you consent to the use of ALL the cookies. However, you may visit "Cookie Settings" to provide a controlled consent.
Cookie SettingsAccept All
Manage consent