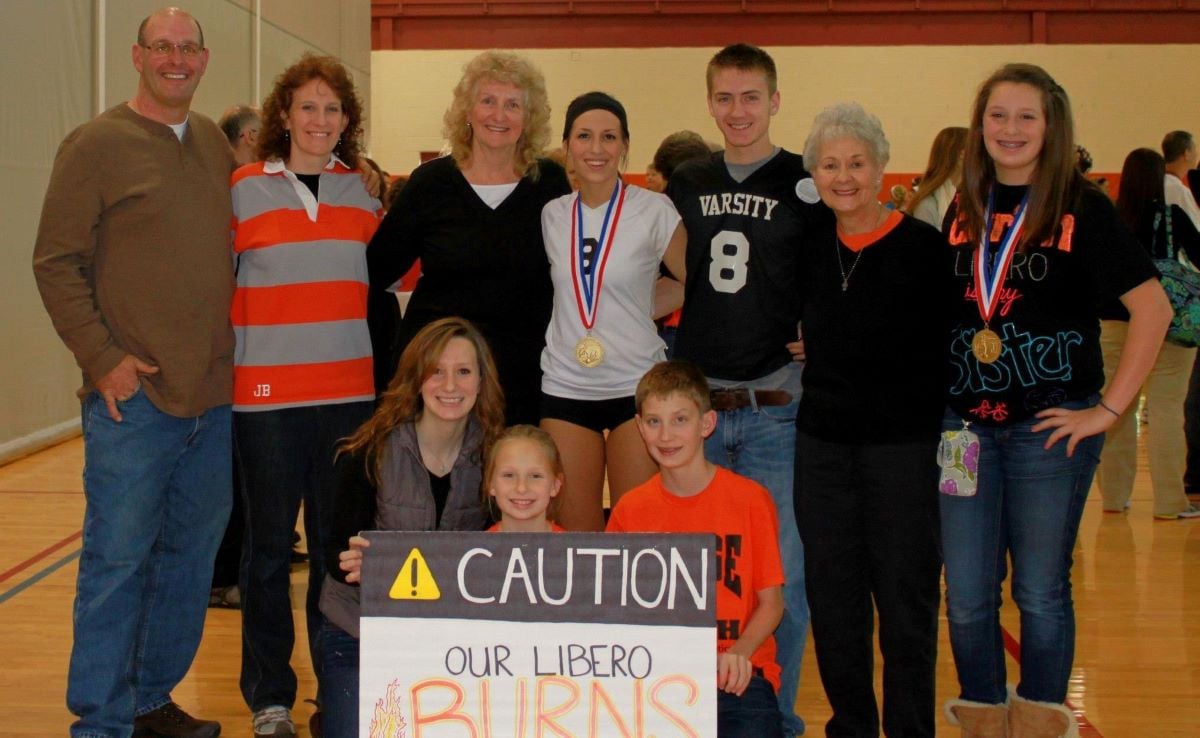 SHIPPENVILLE, Pa. – If you text or call the Burns family on Saturday and they don’t respond right away, know that they aren’t being rude.

They are just going to be kind of busy.

See, the Burns family is a volleyball family, and when it comes to high school volleyball in the Commonwealth of Pennsylvania nothing is bigger than championship Saturday, which so happens to be this Saturday, Nov. 21.

And the Burns are going to be a little busy Saturday, because not one, but two of their daughters/siblings have eyes set on PIAA gold.

Korrin, the youngest of five Burns’ children, four of them volleyball-playing daughters, is the top hitter on the No. 1 ranked Class 1A team in Pennsylvania, Clarion Area, which plays Marian Catholic for the state title at 10:30 a.m. at Cumberland Valley High School in Mechanicsburg.

Korrin Burns (on Ellie’s back) with Ellie Burns after Ellie’s recent engagement.

But Korrin’s quest for gold isn’t a one-deal shot for the Burns Saturday, as Ellie, the second oldest and the second of the four daughters, is also seeking PIAA gold as an assistant coach with the No. 1 ranked Class 4A team in Pennsylvania, North Allegheny, which will take on Unionville for the state title at 6 p.m. at Cumberland Valley High School.

“I think that is something that is pretty unique and very, very special to me,” Ellie Burns, who won a PIAA championship at Clarion High in 2012, said. “It was special when my mom and I had that bond (mom – Jodi won a pair of PIAA titles at Norwin High School in the mid-1980s), and now there is not only the possibility for my mom, Korrin, and I having it, there is the possibility to have it on the same day.”

Korrin said it is only fitting she gets the chance to play for the state title on the same day a team her sister is helping to coach is also playing for a state title.

“It is really exciting,” Korrin said. “I would never be anywhere in volleyball without my sisters, my mom, and my coaches. I could not get here without them.

“I really like knowing my older sister, who has been there for the process, been there for my whole career, will be there along with me. It is really exciting.”

Mom, Jodi, whose state titles came in 1984 and 1986 in Class 3A during a two-class system, is just happy her girls are happy.

“First of all, they are happy,” Jodi said. “They love the sport as much as I do, which doesn’t get any better. The fact they are both in situations where they are still playing is a lot of fun.”

Jodi said she isn’t nervous about Saturday, and, in fact, is going to enjoy the day.

“It is a totally fun day Saturday,” Jodi said. “Both teams are strong. I know they are going to come out and play well. In terms of nerves, I don’t have any because I know they are right where they want to be. Win or lose, they are happy they are there. All I ever want is that there are no injuries and everybody has their best day and performs to their high level and leaves everything on the table. That is always my goal, to stay healthy, have fun, and compete. If you can walk away and say that they competed, that is all that matters.”

Korrin grew up with tales of her mom’s state titles and was eight years old when Ellie and the Lady Cats won the state crown in 2012.

“It has always been a goal,” Korrin said. “I looked up not only to my older sisters – her oldest sister, Karly (Burns) Long, was a PIAA runner-up with Clarion, but my mom, too, as she won two as well. It is something I have wanted to do. I couldn’t see myself not doing it. That is why I want it so bad.”

Ellie believes Korrin being around the team in 2012 will pay dividends for Clarion in 2020.

“Korrin was at almost every game,” Ellie said. “It wasn’t something where she was told we are going to Ellie’s game and she was upset. She was the kid holding the sign. When I played at Pitt, she was the young little girl with paint on her face. I think this is very special for Korrin. She was there when Karly and I both played in state championship games. I think going into this game, not only has she felt the atmosphere, she knows what to expect and what to look for. She has a good feel for dealing with the events leading up to it. It’s full of excitement, and Korrin knows how to handle it because it’s nothing new to Korrin.”

Jodi said sharing the moment with her daughters is exciting.

“We are all thrilled,” Jodi said. “It is so much fun that every sister is reloving (volleyball) through Korrin and watching the team perform. It feels so good that no one (in our house) can say they are the only one. It is so much fun.”

Jodi said while her background was squarely in volleyball – after Norwin she went on to a Hall of Fame career at Clarion University and spent two stints as the Golden Eagles head coach – she never pushed kids to play the sport.

“It’s so much fun,” Jodi said. “I wasn’t one of those parents that was making them play the sport. That goes for all of my kids. I encourage them to play everything, basketball, soccer, to be musicians. That they feel in love with the sport, I couldn’t be happier. They are so dedicated because they love the sport. The conversations in this house are awesome. It doesn’t get any better than every conversation having something to do with the game, and the IQ because of it is high. It is all they do, talk about the sport and how to get better. It is just fun. Boyfriends and husbands have to be really OK about it.”

Korrin said she is happy her game is before her sisters.

“With the whole circumstance with COVID, we are the first wave (of games) and she is the last wave. Once we eventually win it, it will make me feel better.”

Ellie said North Allegheny head coach Heidi Miller is making sure she will have the opportunity to watch Korrin and Clarion play.

“My team is going down the night before, and our head coach coached Korrin before (in club),” Ellie said. “She knows Korrin and I have a very special relationship, and she is going to make it possible for me to watch her. Family is important to her, and she knows I need to be there for this big moment in Korrin’s career.”

Clarion actually advanced to the championship game a little quicker than North Allegheny. The Lady Cats swept past Bishop Canevin in the semifinals Tuesday, while the Lady Tigers were in a five-set battle with District 3’s Hempfield (not to be confused with the WPIAL’s Hempfield.

But that didn’t stop Ellie from knowing what was going on with the Clarion match.

“I actually knew the entire time,” Ellie said. “I asked my mom to give me a point-by-point play-by-play via text messages. My notifications come to my Apple Watch. I would occasionally check them. When they advanced, it was like it was going to explode my arm. I felt like I didn’t even need to check. It was just something I knew they won. I got chills when I felt I knew.”

“I know my mom and the rest of them were trying to follow,” Ellie said. “We ended not long after they did. They were texting asking what’s going on, what’s happening. Once we won and settled down and the team went to the locker room, I texted them ‘I will see you guys on Saturday in the same place.’ They were super excited and supportive as well.”

DuBois’ Gregory Named PVCA D9 Class 3A MVP; All-D9 3A Teams Named
Cardiac Oilers Set To Battle Thomas Jefferson In Class 4A Semifinals
We use cookies on our website to give you the most relevant experience by remembering your preferences and repeat visits. By clicking “Accept All”, you consent to the use of ALL the cookies. However, you may visit "Cookie Settings" to provide a controlled consent.
Cookie SettingsAccept All
Manage consent