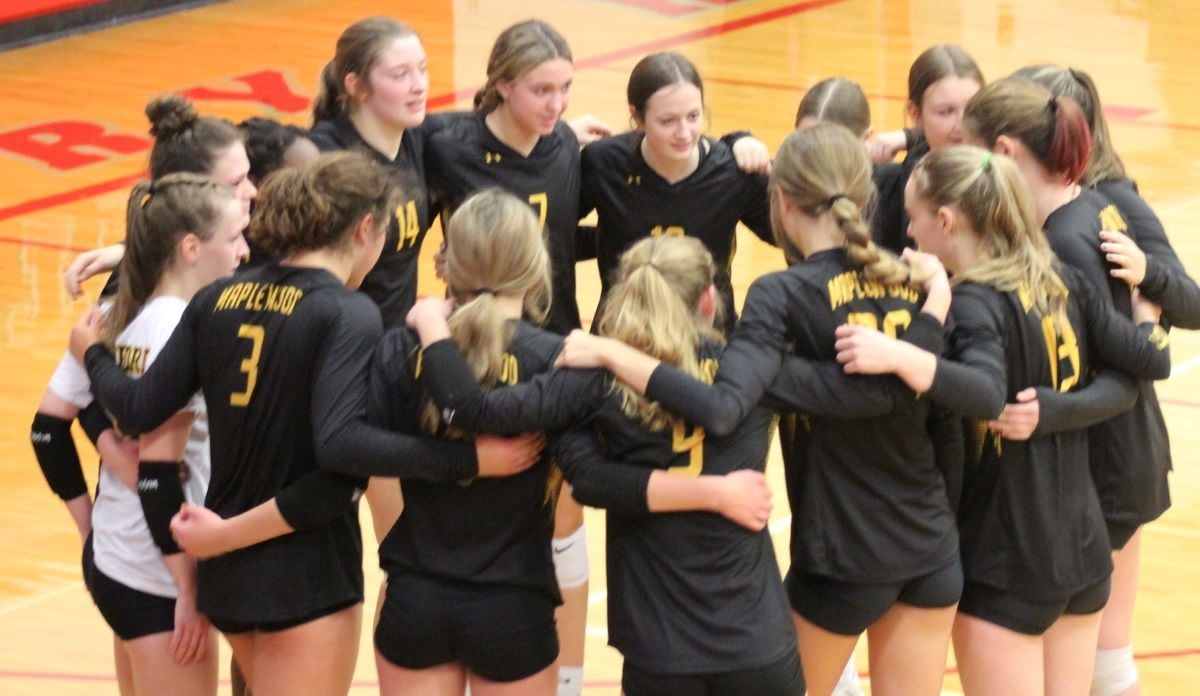 Also see: “Everything We’ve Ever Wanted”: Maplewood Battles Past Oswayo Valley to Advance to Class 1A State Final (Full story with player/coach reaction)

Kellert had 17 kills and an ace with Cook adding a match-high 18 kills.

The match was as tight as the score throughout most of the night.

Maplewood took an early 12-6 lead in the first set before watching Oswayo Valley fight back with a 9-0 run that featured four kills from Cook to take a 15-12 lead.

But a couple of errors – one serving and one hitting – plus three kills, one solo, and one tandem block from Thomas pushed Maplewood back ahead 19-17.

Things stayed close with Oswayo Valley tying things up at 21 (Ava West kill) and at 22 (Kellert kill) only to commit a net violation to put Maplewood ahead 23-22. Hunter then made it 24-22 with a kill, and a tandem block from Hunter and Madison O’Hara gave the Tigers the first set.

The second set was never more than three points apart.

Oswayo Valley had that lead, 10-7, following a hitting error by Hunter, but Maplewood answered with a 6-1 run that included two kills from Hunter and another by Thomas to go ahead 15-13.

Maplewood either maintained a slim lead or was tied until Oswayo Valley used a 3-0 spurt to take a 23-21 lead on a dig all the way over the net for a point by Praylan Perkins.

Following a Maplewood timeout, Thomas had two straight kills to tie things up at 23, then a carry on the Green Wave made it 24-23 before a hitting error gave the Tigers a 25-23 win.

But Oswayo Valley wasn’t going to have its season end without a fight.

Four kills from Kellert got the Green Wave back within one, 19-18, and then back-to-back kills from Cook and Trinity Lundy tied the match at 21.

A block from Thomas and Hunter gave Maplewood the lead back, 22-21 before a Cook kill tied things back up at 22.

Another Thomas kill made 24-23, and then a Megan Woge tip put the Tigers into the PIAA title match.

Maplewood will face the winner of the West Branch vs. Sacred Heart match in the championship match at 10:30 a.m. Saturday at Cumberland Valley High School. West Branch and Sacred Heart were scheduled to play Tuesday but were postponed because of the weather.

Much more on this match will be posted later including postgame reaction.