“Everything We’ve Ever Wanted”: Maplewood Battles Past Oswayo Valley to Advance to Class 1A State Final 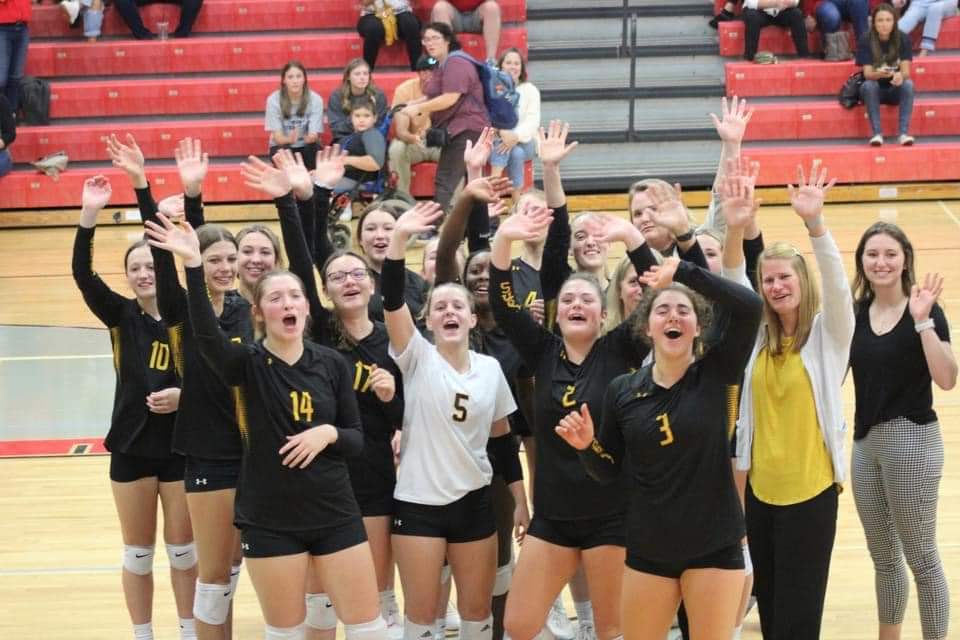 The Maplewood Tigers’ goal of making it to the state championship game is now a reality following a tightly contested 3-0 win over Oswayo Valley (25-22, 25-23, 25-23) in the PIAA Class 1A semifinal on Tuesday.

Varndell finished with 29 set assists on her way to Allegheny Grille of Foxburg Player of the Match honors.

A program rich in tradition, this 2022 team will seek the program’s sixth state championship. And for the senior trio of McKenna Crawford, Varndell, and Saide Thomas, its mission accomplished.

Each set was hotly contested, with Maplewood jumping out to a 12-6 lead in the first set, only to watch Oswayo Valley go on a 9-0 run. Neither team led by more than three points in the second set and in the third, OV rallied from down 18-11, but back-to-back kills by Trinity Lundy and Olivia Cook capped a 10-3 run to tie it at 21.

Maplewood (22-3), the District 10 champion, was able to close it out on a kill by Thomas and a tip over the net by Megan Woge.

“That was not a three-game sweep,” said Maplewood coach Shelia Bancroft. “People will look at that and say three-game sweep, but OV’s a very good team and that could have gone either way. If they get one of those sets from us it might be a whole different ball game.”

The rally in the first set was indicative of the fight District 9 champion Oswayo Valley (24-1) showed all season. It was a set that was tied at 21 and again at 22, but a Maplewood net violation and an Elizabeth Hunter kill made it 24-22 and a tandem block by Hunter and Madison O’Hara gave the Tigers the first set.

“We just made a few little mistakes, and against good teams, you can’t make mistakes,” said Oswayo Valley coach Ken Kellert. “We were down seven, came back. We were down six, came back, but it’s just those little things that win or lose a game.”

Maplewood was equally battle-tested, fighting just to get out of D10. An early-season 3-0 loss to Cochranton served as motivation, with the Tigers beating the Cardinals 3-0 in the D10 final, using that match as a springboard of sorts.

“We always talk about how getting out of District 10 was going to be very hard, beating Cochranton,” Crawford said. “After we beat them, that gave us a lot of momentum. But we just focused on one game at a time and played every game like it’s our last and now we’re here.”

Oswayo Valley led 10-7 in the second set, only to watch Maplewood take a 15-13 advantage. It was a lead the Tigers held until Oswayo Valley went on a 3-0 run to take a 23-21 lead after a point by Praylan Perkins.

That prompted Bancroft to call timeout, and the result was a 4-0 run to close out the set. Thomas had back-to-back kills to tie things up, and the Tigers got the final two points on a carry call against the Green Wave and a hitting error.

“I don’t think we played our best, but we were resilient,” Bancroft said. “A lot of girls stepped up and played great tonight. We were able to get them out of system a little bit, and their middles were unstoppable. I thought a few times on defense that it was there and we weren’t ready for it and played out of position.”

The Tigers jumped out to the 18-11 lead in the third, only to watch OV storm back thanks in large part to the play of senior Avaree Kellert.

After the kills from Lundy (36 set assists) and Cook (17 kills, 20 digs) tied it up at 21-all, the Tigers were able to close it out, setting up a date with either Sacred Heart of West Branch for the state title (that match was postponed until Wednesday due to weather).

“They’re (Oswayo Valley a good volleyball team and it was a great match,” Bancroft said.

For the Green Wave, Kellert also had two blocks, and Praylan Perkins had four kills and 15 digs. Kellert also finishes her OV career with 1,028 career digs.

It ends a season for the Green Wave that saw them win their first District 9 title and advance farther than they ever have in the PIAA playoffs.

“We gave it our all,” coach Kellert said. “How the year started out, some of the issues we had, they persevered. For a school the size of ours to get here is awesome. I’m proud of them.”

They will await the winner of Sacred Heart and West Branch, with the matchup set for 10:30 a.m. Saturday at Cumberland Valley High School in Mechanicsburg.

“The fans were into it on both sides and it really helped to have all these people here,” Bancroft said. “The girls feed off that and hopefully we get that on Saturday.”