Big Second Half Sends Farrell Past Karns City, Into PIAA Class 2A Semifinals 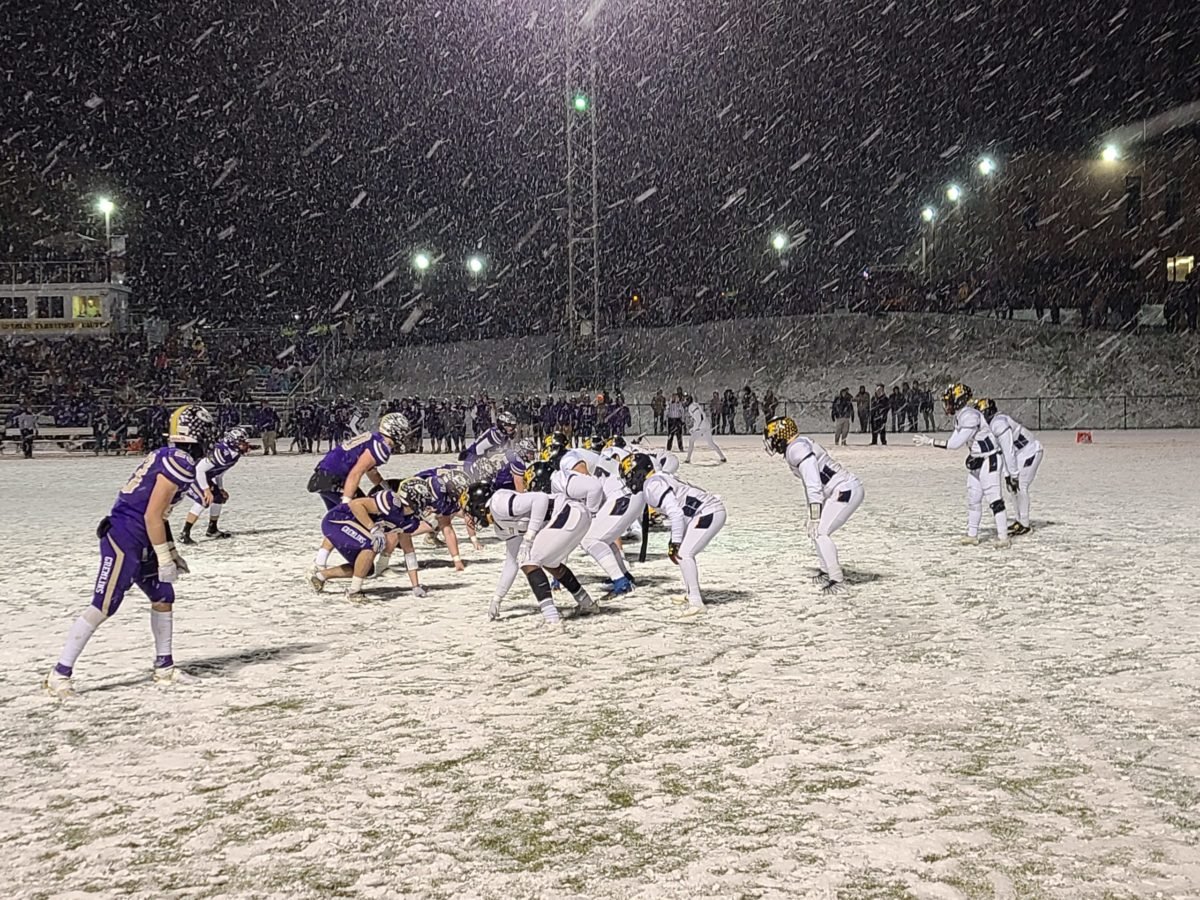 Farrell battled past Karns City 30-12 in their PIAA Class 2A quarterfinal game on Friday.

Stewart delivered a pair of splash touchdowns, a 34-yard reception from Trian Holden in the second quarter to open the scoring, and an 82-yarder from Kabron Smith in the third quarter to help the Steelers advance to the state semifinals with a 30-12 win.

“Coach always tells me if you have a one-on-one, you better take care of business,” Stewart said.

The Steelers (11-0) used a pair of long drives to begin the second half covering 91 and 70 yards to break open a tight 8-6 game at halftime.

Anthony Stallworth, who rushed 20 times for 141 yards, capped the initial drive of the second half with a 21-yard touchdown run to make it 16-6 after his 2-point conversion run.

After forcing a Karns City punt, the Steelers got the ball back and after going backward on a penalty, Smith found Stewart over the middle and the senior receiver did the rest to make it 22-6 with 2:46 remaining in the third quarter.

“It was just one of those games where we had to grind it out, play through adversity and find a way to win,” said Farrell coach Amp Pegues.

Trian Holden and Smith split the quarterback duties, with Holden handling the reps in the first half and Smith in the second half.

“He came in and gave us a little spark,” Pegues said of Smith. “And Omar Stewart’s a kid that can play and get the job done and he was able to do that.”

The Steelers did all of that on offense without the services of one of their stars, Kylon Wilson, who dressed but was limited.

Karns City didn’t go down without a fight. After the big play from Smith to Stewart, they got the ball at the Farrell 45 after a short kickoff. A couple of tough runs by Luke Garing got them inside the 10, where Luke Cramer punched it in from seven yards outs to make it 22-12. The 2-point conversion was no good.

The Gremlins (11-2), the two-time defending District 9 champions, recovered an onside kick to get the ball right back, but the Farrell defense was able to stand tall and force a turnover on downs.

Taidon Strickland and Anthony Jackson have been two of the leaders of the stout Steeler defense all season, and Jackson talked about the win afterward.

“We knew it was going to be bad up here, snowing, raining and we were ready for it,” Jackson said. “It’s fun to play in a game like this because you never know what’s going to happen.”

Dwight Allen put the finishing touches on the win for Farrell with a 17-yard interception return with 4:05 to score, and the Steelers were able to keep the Gremlins out of the end zone when they drove inside the 10 late in the fourth.

“We knew they were going to come right at us,” Pegues said. “You have to give credit to Karns City. They are well-coached and came in with a good game plan. In these conditions, they kind of favored them more than us, but we were able to get the job done. Coach Stewart is great at what he does on the defensive side of the ball.”

The Gremlins did a great job of limiting the potent Steeler attack in the first half. Both teams only got the ball once in the opening quarter.

Jackson came up with a big fourth-down stop for Farrell and the Steelers got the ball and chewed up nearly nine minutes of clock on their initial drive, but it stalled in part due to penalties.

Their second drive did not, however, as Holden connected with Stewart who alluded a couple of defenders on his way to the end zone.

Karns City had the answer, however after an interception set the Gremlins up at the Steelers 39.

Eric Booher looked in the direction of a streaking Micah Rupp down the left sideline, and Rupp made a sensational 1-handed catch and went into the end zone with 1:01 to go in the half. The two-point conversion was no good, making the score 8-6.

Farrell held the edge in total yardage, 350-238. Smith finished with 110 yards through the air and Holden 85. Stewart had five receptions for 161 yards and the two scores.

For Karns City, Garing finished with 70 yards and Jayce Anderson 52 on the ground. Booher had 96 yards passing, with 49 going to Rupp and 47 to Cooper Coyle.

Karns City coach Joe Sherwin was proud of his team’s effort in limiting Farrell to their second-lowest point total of the season (they scored 24 in a win over Westinghouse last week).

“We’ve had a great group of seniors leading us throughout the season,” Sherwin said. “They did a great job and we’re going to miss those guys a lot. The guys gave everything they had tonight and because of that, I couldn’t be prouder of a group of guys. We asked them to fight to the very end and that’s exactly what they did.”

With the win, Farrell moves on to play Serra Catholic, a 35-12 winner over Beaver Falls in the WPIAL championship game, in the semifinals next week with a trip to Hershey on the line.

“I’ve watched them a little bit,” Pegues said. “I know they beat Beaver Falls tonight and we saw them a little bit in 7-on7’s over the summer. They’re very athletic. We’re going to be well-prepared and see what happens.”

Hoenstine Sets Passing Record as Central Tops Grove City in PIAA 3A Quarterfinals
Small but Mighty Shreckengost Carries Redbank Valley into PIAA Semifinals for First Time
We use cookies on our website to give you the most relevant experience by remembering your preferences and repeat visits. By clicking “Accept All”, you consent to the use of ALL the cookies. However, you may visit "Cookie Settings" to provide a controlled consent.
Cookie SettingsAccept All
Manage consent