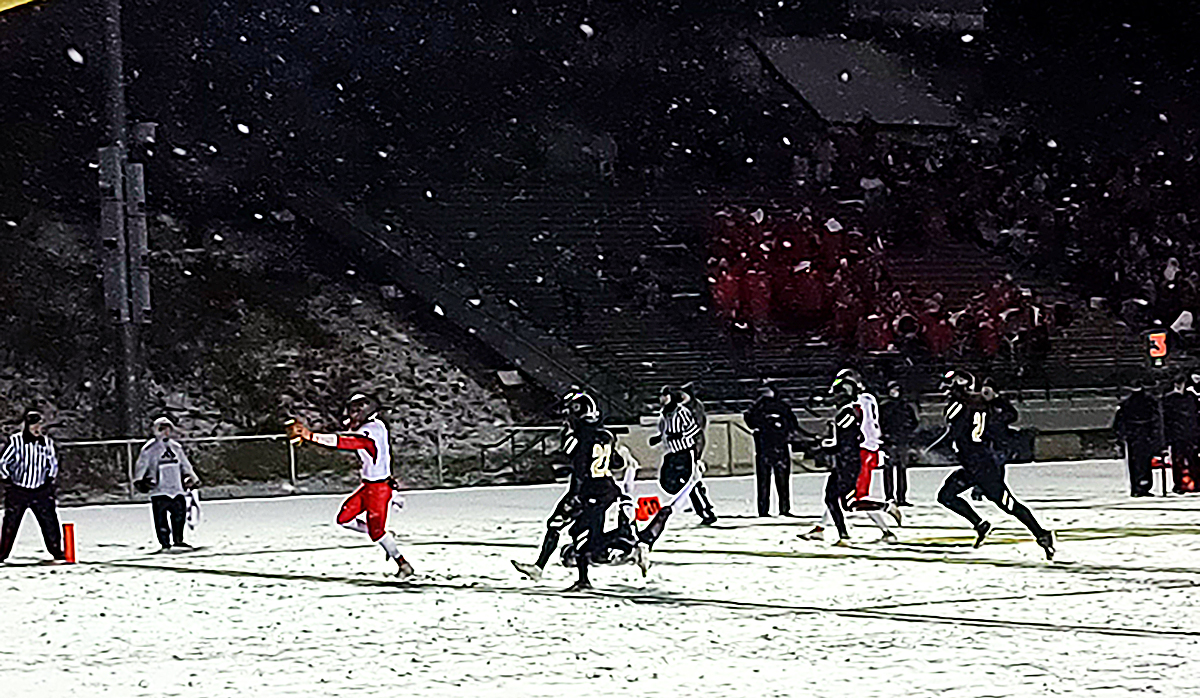 Central's Jeff Hoenstine reaches the ball across the goal line for his third touchdown of the game against Grove City. The Dragons topped the Eagles, 35-6, to advance to the PIAA Class 3A semifinals. Photo by Brian Hagberg

With his 1-yard shovel pass to Hunter Smith in the first quarter, Hoenstine set the state record for touchdown passes in a season with 55. Penns Valley’s Aaron Tobias set the previous record (54) in 2019.

Been told the first TD here for Central was a shovel pass, and thus a state record Dragons QB Jeff Hoenstine (55) pic.twitter.com/41HrMkrdjO

Central was driving towards a second score in the first quarter, but Grove City’s Zach Rodgers picked off Hoenstine to get the ball back for the Eagles. It was the first of five total turnovers in the game between the two teams-plus four more fumbles recovered by the fumbling team-as they battled not only each other but gusty winds and driving snow as well.

Grove City’s Hunter Hohman drops back to pass during the PIAA Class 3A quarterfinal against Central at Slippery Rock University. Photo by Brian Hagberg.

The Eagles took a chance on the drive and went for it on fourth down from their own 15. The Dragons got the stop and took over in plus territory late in the first quarter.

Less than a minute into the second quarter, Hoenstine took the snap and pitched to Parker Gregg. Gregg rolled to his right, then threw left to a wide open Ethan Eicher for a 4-yard TD pass and a 14-0 lead.

It looked like that might be the score at the half, but Central recovered a fumble at their own 40 with 20 seconds left in the half. Two plays later, Gregg took a handoff, found a lane off right tackle, broke away from two defenders and raced 54 yards to paydirt to give the Dragons a 21-0 halftime advantage.

Hoenstine was back at it midway through the third quarter. Hoenstine dropped back and was almost immediately under pressure from the Grove City front. He spun away from the pressure, ran up to the line of scrimmage and launched a pass to the end zone. Eli Lingenfelter came down with it just inside the backline to give the Dragons a 28-0 lead.

With less than two minutes left in the quarter, Grove City again went for it on fourth down from its own 35. Central held and took over. Hoenstine finished the drive with a 10-yard run to stretch the lead to 35-0 with 30 seconds left in the quarter.

The Dragons recovered a fumble inside the Eagles’ 25 on the ensuing possession, but the Eagles defense held on fourth down to get the ball back.

Grove City marched 75 yards on nine plays and Hunter Hohman capped the drive with an 18-yard touchdown pass to Gavin Lutz to get the Eagles on the board.

Gregg finished with 165 yards on 18 carries with a score. Hoenstine was 5-12 passing for 55 yards with two touchdowns and two interceptions and added 53 yards and a TD on the ground.

Hohman led the Eagles with 44 rushing yards on 13 carries and was 9-22 passing for 105 yards with a touchdown and an interception. Lutz finished with 73 yards on four receptions and a score.

Central will take on the winner of Saturday’s Central Valley/North Catholic game (noon at Heinz Field) in the semifinals next week.

McDowell Falls to WPIAL Champion Mt. Lebanon in 6A
Big Second Half Sends Farrell Past Karns City, Into PIAA Class 2A Semifinals
We use cookies on our website to give you the most relevant experience by remembering your preferences and repeat visits. By clicking “Accept All”, you consent to the use of ALL the cookies. However, you may visit "Cookie Settings" to provide a controlled consent.
Cookie SettingsAccept All
Manage consent