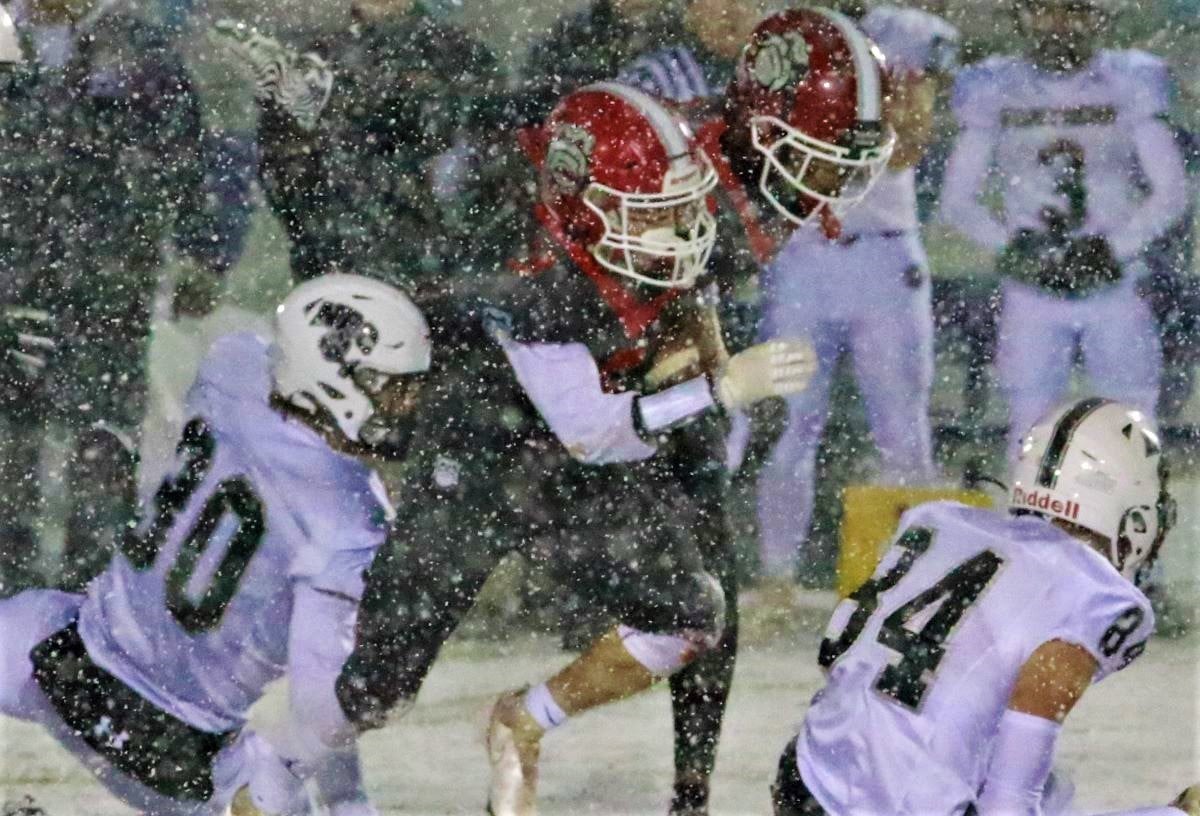 Brenden Shreckengost rolls past Northern Bedford's Ben Gable on his way to the eventual game-winning touchdown on the first play of the fourth quarter Friday night. Photo by Mike Maslar

But on Friday night Shreckengost may as well have been Jerome Bettis.

On a frozen, snow-covered field at Clarion University’s Memorial Stadium, the Bulldog senior ran 20 times for 137 yards in leading Redbank Valley into the PIAA semifinals for the first time in school history with a 21-14 win over District 5 champion Nothern Bedford in the Class 1A quarterfinals.

“Boo is a guy who is the heart and soul of this team,” Redbank Valley head coach Blane Gold said. “He was just incredible tonight.”

Shreckengost, who had entered the game having toted the ball all of 22 times for 55 yards on the season, broke a 14-all tie with a 47-yard touchdown run on the first play of the fourth quarter when he ran through a tackle attempt from Rece Dilbert then ran through Ben Gable at the 38-yard line before outracing the defense to the end zone.

“Sometimes you have to put your foot in the ground and get going,” Shreckengost said.

All this from a guy who wasn’t expecting to be the feature back when he woke up Friday morning.

But when Redbank Valley’s starting running back, Ray Shreckengost, was suspended for the game for disciplinary reasons Friday afternoon, the ball was turned over to the next man up, who turned out to be Brenden Shreckengost.

“We lost Ray,” Brenden Shreckengost said. “We found about that today, Somebody had to step up. Why not me. Somebody has got to do it.”

While Brenden Shreckengost’s touchdown run broke the tie, Zeldon Fisher made the defensive play of the game with 41 seconds left.

Northern Bedford had driven from its 36-yard line to the Redbank Valley 6-yard line aided by a pair of personal fouls on the Bulldogs – more on the second of those calls in a moment.

Facing a fourth-and-3, the Panthers handed the ball to Brooks Snider, but Fisher, blitzing from his linebacker position, shot the gap and tackled Snider from behind for a loss on the play clinching the victory.

“I knew someone had to do it,” Fisher said. “I thought about our seniors. They are all my brothers. I am so close to them. I had to do it for them. I just got there and tackled him. It was one of the happiest moments of my life.”

Moments before Fisher’s stop, Redbank Valley looked like it had won the game on a great play by Chris Marshall.

On fourth-and-9 from the 13-yard line, Northern Bedford sophomore quarterback Eion Snider hit sophomore running back Adam Johnson in stride at the 2-yard line. But as Johnson was hauling in the apparent catch, Marshall exploded on him hitting in the shoulder area dislodging the ball.

But as the Bulldogs celebrated, a yellow penalty flag came out, and Marshall was flagged for a hit to the head giving Northern Bedford another opportunity – because the penalty was half the distance and a person foul is not an automatic first down in high school football it was still fourth down.

“That was tough,” Gold said. “Our guys went from Cloud Nine of emotion to having to play another down. But it was still fourth down. I called timeout because I wanted us to collect our thoughts. I wanted them to know they could still win the football game here. I wanted to make sure they were certain it was fourth down.”

During the timeout, Redbank Valley decided it was going to send an all-out blitz.

“We essentially made a decision to bring an all-out blitz,” Gold said. “Either we make a stop or they score. The kids bought into it, and we made a play.”

Making plays was something the Bulldogs did a number of times during the night.

It started early when Brenden Shreckengost answered a nine-play, 53-yard drive by Northern Bedford to open the game that gave the Panthers a 7-0 lead with a 79-yard kickoff return for a touchdown.

Shreckengost had a bit of trouble getting a handle on the ball at first and then slipped on his initial cut but got a great block from Marshall and was off to the races to tie the game at seven.

“I got a really nice block by Chris,” Shreckengost said. “That was perfect. That is what set it all up. Then it was just a foot race.

“It was a big momentum shift. We needed it quick. You can’t start slow in games like this. This is the state playoffs, you can’t get down early.”

Another big play came midway through the third quarter when backup quarterback Gunner Mangiantini threw a 31-yard touchdown pass to Marshall, who made an acrobatic catch, to tie the game at 14.

Mangiantini, the starter the last two years, was in the game partially because starter Bryson Bain had gotten hurt earlier in the quarter – he did return – and partially because the weather was more conducive to have him run the option offense.

“It’s a testament to Gunner,” Gold said. “He is a tremendous kid. He could have pouted. He could have cried whenever we decided to go with someone else. But, we fully trust putting the ball in Gunner’s hands when the game is on the line.”

Redbank Valley’s defense also came up with some big plays, including a pair of interceptions by Marquese Gardlock that stopped Northern Bedford drives and a big fourth-down tackle in the third quarter by Marshall when the Panthers were threatening to retake the lead.

The first one came on the first pass of the game by Eion Sider on a second-and-10 from the Redbank Valley 37 and the game tied at seven late in the first quarter.

Snider looked deep, but Gardlock was on his man like glue and picked off the ball at the 4-yard line.

His second pick came early in the fourth quarter after Shreckengost’s touchdown run had given the Bulldogs the lead.

Northern Bedford had taken advantage of a short kickoff to move from its 47-yard line to the Redbank Valley 16.

But the Panthers tried to get cute with a trick play, and Gardlock was able to grab a ball that slipped out of Johnson’s hands on a halfback pass for the drive-stopping interception.

Marshall’s fourth-down tackle came in the third quarter after his touchdown catch had tied the game.

Northern Bedford was again driving moving from its 34 to the Redbank Valley 19 where it had a third-and-4.

A loss of one when Snide slipped trying to go around the left end made it fourth-and-five from the 20, and that’s when Marshall shot in from his safety position to tackle Johnson for a 6-yard loss setting up the eventual game-winning touchdown drive.

“Chris is a special athlete,” Gold said. “That why we are starting to get some calls from some PSAC about him because people are noticing his athleticism, his speed. He plays a very physical safety position. That was why we moved him there.”

He capped the opening drive with a 4-yard scoring run then gave the Panthers a 14-7 halftime lead when he scored on a 2-yard run late in the first half to end a 10-play, 60-yard drive.

The long drives helped Northern Bedford run 63 plays to Redbank Valley’s 45 and the Panthers to outgain the Bulldogs 283 to 260 yards.

Johnson was a workhorse for Northern Bedford rushing 33 times for 108 yards. Eion Snider was 4 of 10 passing for 92 yards and the interception and ran three times for five yards and the two touchdowns.

Redbank Valley will take on WPIAL champion Bishop Canevin, a 42-7 winner over OLSH in the WPIAL title game at Heinz Field Friday. The game with BC will be next week at a date, time, and place to be announced.

“It’s special,” Gold said. “To have a chance to play to go to Hershey, that’s special. We are going to enjoy this for a couple of days. Obviously, when you’re playing the WPIAL, that’s a whole different ballgame. It’s a whole different level than we’ve seen. But we get to say that we are playing to go to Hershey. That is something I’ve always wanted to do. Hopefully, it’s something the kids embrace.”

Notes: Redbank Valley is the first District 9 football team to advance to the PIAA semifinals since Clarion in 2013. The Bobcats lost 39-12 to North Catholic in Class 1A … The Bulldogs will try to become the first District 9 team to advance to a PIAA championship since 1992 when Smethport lost to Scottland School in the championship game after beating Rochester in the Class 1A semifinals. Keystone in 1989 in Class 1A is the only other D9 team to qualify for the PIAA title game. In both instances, the D9 team only had to win one game to advance to the PIAA title game.

Redbank Valley celebrates at the end of the game

Big Second Half Sends Farrell Past Karns City, Into PIAA Class 2A Semifinals
Nov. 27, 2021 Football Scores
We use cookies on our website to give you the most relevant experience by remembering your preferences and repeat visits. By clicking “Accept All”, you consent to the use of ALL the cookies. However, you may visit "Cookie Settings" to provide a controlled consent.
Cookie SettingsAccept All
Manage consent