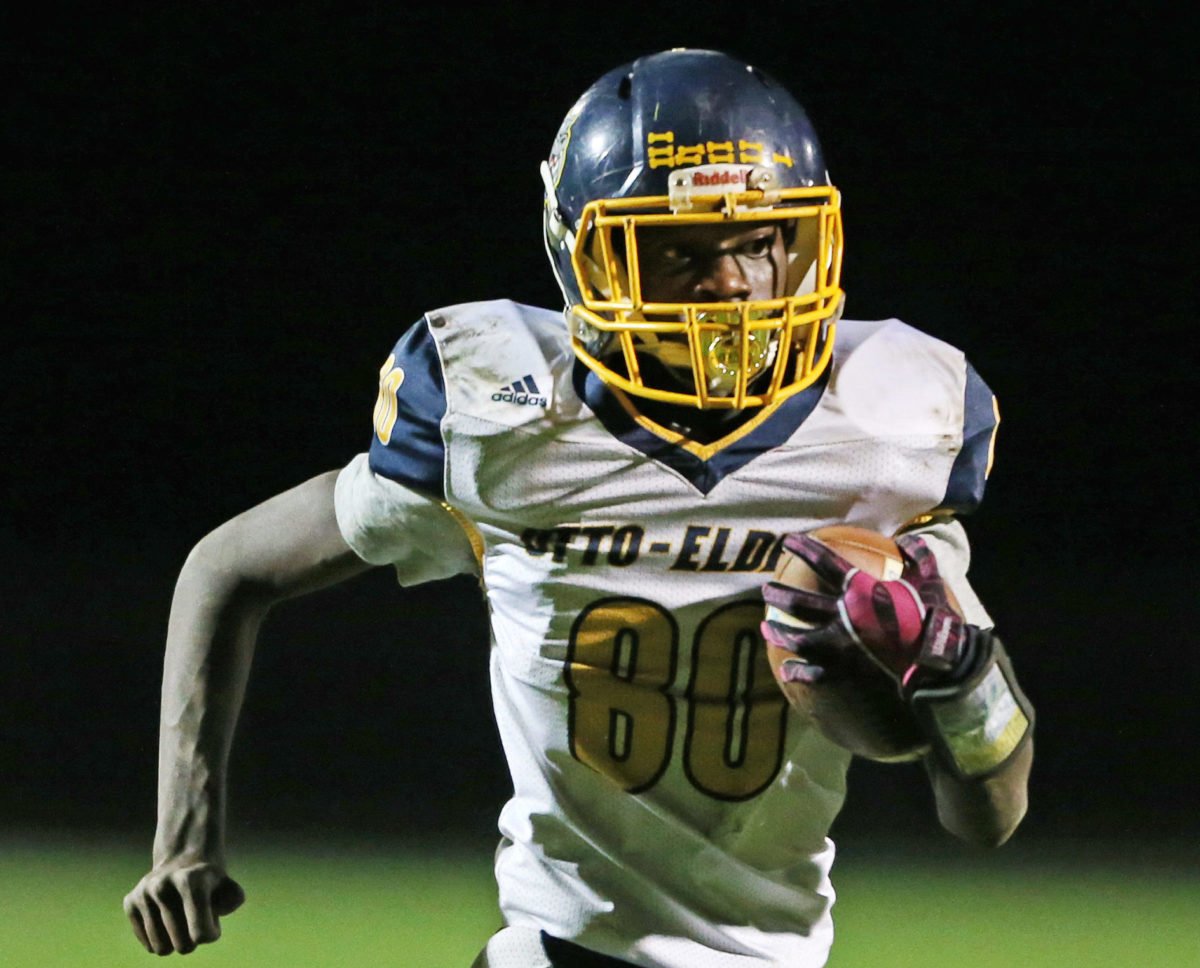 SHEFFIELD, Pa. – Otto-Eldred scored six first-quarter touchdowns on its way to a 54-6 win at Sheffield on Saturday.

Three of those six scores came from Manning Splain who had an interception return, punt return, and touchdown reception in the quarter on his way to earning the Jim Kelly Player of the Game powered by the Allegheny Grille of Foxburg.

Splain talked about the win in the postgame:

The Terrors received the opening kickoff and marched quickly down the field. Hunter App started the scoring just over a minute into the game with a 25-yard touchdown run to make it 6-0.

Splain scored the first of his three TDs just 54 seconds later when he picked off Colby Barr’s pass and went 34 yards to paydirt. App ran in the 2-point conversion to make it 14-0.

Following a 3-and-out, Splain received the punt at the Sheffield 48, cut to the left, found a lane, and was off to the races for his second score. App again ran in the conversion to put the Terrors on top, 22-0.

Two minutes later, the Terrors were back in the end zone thanks to a 2-yard Ray’Shene Thomas run on the jet sweep.

Thomas’ interception on Sheffield’s next possession had Otto-Eldred back on the Wolverines’ side of the field and Blaze Maholic took a pitch 42 yards to give the Terrors a 35-0 lead.

Splain capped the first-quarter scoring with just over a minute left in the frame. Andrew Schenfield found Splain in the middle of the field and Splain did the rest for a 26-yard touchdown strike.

The Terrors had a 42-0 lead after the first quarter.

Both teams found the end zone in the fourth quarter.

On the first play of the fourth, Schenfield threw a strike to Thomas down the right sideline for a 30-yard touchdown.

Shane Magee got the ball back for Otto-Eldred on an interception, and on the next play, Magee hit David Schenfield on a crossing route. David Schenfield found the sideline and was off to the races for the Terrors’ final TD of the afternoon.

On the ensuing kickoff, Joe Cabot fielded a bouncing kick at the Sheffield 25, made a couple of moves to get to the outside, and nearly took it to the house. Thomas was able to catch Cabot at the Otto-Eldred seven.

The Terrors appeared to have forced a fourth down, but a facemask penalty gave the Wolverines a third-and-goal from the three. Jeremiah Richardson took the handoff and tucked the ball just inside the pylon for the Sheffield touchdown.

Defensively, the Terrors forced five turnovers (three interceptions and two fumbles) and held the Wolverines to just 62 yards of total offense (including -19 on the ground).

Splain finished with 65 receiving yards to go along with his three TDs. Andrew Schenfield was 6-11 passing for 130 yards and two touchdowns, while Magee was 6-7 for 88 yards and a score. Thomas had two grabs for 66 yards.

For Sheffield, Barr was 11-25 passing for 81 yards and three picks. Richardson had four catches for 42 yards and Gage Mott-Macalush had three catches for 21 yards.

Farrell Drops Heartbreaker to Ursuline in Battle of Top Teams
Oil City’s Knox Named Week Two 2022 District 10 Jim Kelly POW Powered by the Allegheny Grille
This website or its third-party tools process personal data.In case of sale of your personal information, you may opt out by using the link Do not sell my personal information.
×
Manage consent