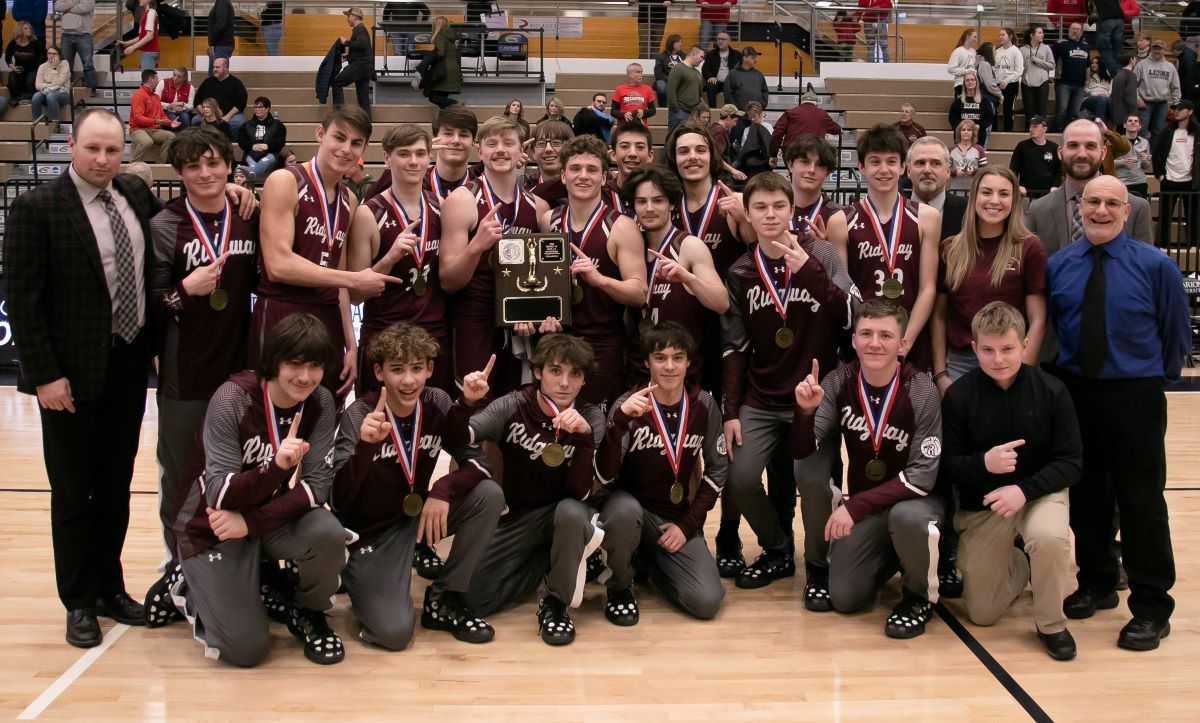 CLARION, Pa. – Tony Allegretto said there was no one he would rather have at the free-throw line with the game on the line than his son, Domenic.

And Domenic Allegretto delivered at the most important time, hitting both of his charity shots with 27.3 seconds left to break a 37-all tie, as Ridgway went on to win its third District 9 Class 2A title in the past four seasons with a 41-38 victory over top-seeded Redbank Valley in the 2A title game Friday night at Clarion University’s Tippin Gym.

Allegretto’s free throws came moments after Marquese Gardlock had tied the game at 37 with a layup off a Chris Marshall pass with 40 seconds to play.

On the inbounds, Jack Benninger passed the ball to Allegretto along the sideline, and Bain was called for a touch foul on Allegretto, who promptly hit both free throws.

“Same thing as always (is going through my mind),” Allegretto said. “Just in practice, in an empty gym like I was all summer shooting those foul shots. I put myself in the summer situation where I am all by myself, silent gym.”

Redbank Valley (22-4), which saw its 17-game win streak snapped, had an opportunity to tie the game from the free-throw line seconds later when Chris Marshall was fouled with 14.7 seconds left.

Marshall, who was 4-for-4 from the line in the quarter up to that point, hit the first free throw to make it 39-38. But he missed the second one and the rebound came out to Aaron Sorg who found a streaking Allegretto down the court for an easy 2-point basket.

“I knew I was all alone, and I knew wanted that basket,” Allegretto said.

Redbank Valley hurried the ball up the court, but Marshall’s hurried three at the buzzer was short setting off a wild celebration by the Elkers (20-5), who have won 11 of 12.

“We fell short last year,” Allegretto said. “We were disappointed. It is all about rebounding and coming back as strong as you can. That’s what we wanted to do all year. That’s what our goal was.”

“It’s very special, especially getting one more with my dad as a senior,” Dom Allegretto said. “It’s bittersweet. It’s awesome.”

After a blah first half that saw Ridgway lead 14-8 in a half that saw more fouls called than baskets made, the game became a back-and-forth affair in the second half.

A 9-4 spurt by Redbank Valley out of halftime got the Bulldogs within a point, 18-17, on a Marshall basket with 3:03 to play in the third quarter.

Another basket by Marshall, this one with 32.4 seconds left in the quarter, gave Redbank Valley its first lead since 5-1 early, 21-20.

But Sorg hit two charity shots with 24.9 seconds left to put Ridgway ahead, 22-21, going to the fourth quarter.

A pair of Dan Park baskets then helped to extend the lead to four, 26-22, 2 ½ minutes into the quarter.

Redbank Valley was able to claw back and tie the game at 30 on a 3-pointer by Owen Clouse with 3:07 to play before four more points from Park, who had 18 in the game including eight in the fourth quarter and 12 in the second half, put the Elkers back ahead, 34-30, with about two minutes to play.

“I try to take advantage of any opponent I have whether it be fronting him in the front, getting him from behind, taking the lob pass in there. Anything to take pressure off the guards. Instead of screening the whole time, I like to ger down there, sit in the post, be patient, and try to put it in the bucket,” Park said. “

Still down four, 37-33, after Allgegretto went coast-to-coast with 1:21 to go, the Bulldogs fought back again with two Owen Clouse free throws followed by the Gardlock basket that tied the game at 37.

Allegretto added 14 points for Ridgway with Sorg chipping in nine.

The title was a sweet one for Coach Allegretto, who has said this will be his final season with the Elkers after a sensational 18-year run that has seen him win five District 9 titles and compile a record of 312-153 (He is 336-181 overall after two years at the helm of St. Marys). Since 2011, Ridgway has gone 259-61 (80.9%) with 11 20-win seasons and 11-winning seasons. The only non-winning and non-20 win campaign was during last year’s COVID-shortened season when Ridgway was 6-9.

“We got the league championship, and we got the District 9 championship,” Tony Allegretto said. “Hopefully, we have a few more wins in our bag of tricks. It’s just like back when Dante’s (Allegretto’s older son) senior year when nobody expected anything out of us. By the end of the year, we were the last team standing, and we were the best team in the district.”

NOTES: Ridgway shot 14 of 30 for the game (46.7%) but was just 7 of 21 through three quarters before shooting 7 of 9 in the fourth quarter led by Park who was 4 of 4 … Redbank Valley shot 11 of 33 (33.3%) for the game but was only 3 of 15 (20%) in the first half … Redbank Valley’s Marshall was called for a technical foul in the first quarter for handing on the rim following a missed dunk attempt. It appeared Marshall was trying to avoid a player under him but the official said he was doing a “chin up” on the basket, although video replay didn’t really indicate that … Allegretto was whistled for two early fouls but played a clean game after that. Fouls were plentiful in the game … Redbank Valley cost itself at the free-throw line where it went 13 of 22 … Ridgway was 12 of 16 from the line.

KARNS CITY, Pa. – Karns City outscored visiting Keystone, 7-4, in overtime to claim the third-and-final PIAA playoff spot awarded to District 9 in Class 2A with a 49-46 victory in the consolation game.

The Gremlins (19-7) trailed, 33-29, going to the fourth quarter but got the game tied at 42 by the end of regulation thanks to five points each from Luke Cramer and Micah Rupp and a key 3-pointer by Cole Sherwin.

Then in overtime, Cramer scored four more points to lead the charge.

Rupp had a monster game with 17 points, 10 rebounds, and nine blocked shots, while Cramer added 13. points

Bret Wingard had a big game for Keystone with 28 points while Tyler Albright added 11.

Karns City will travel to District 6 runner-up Penns Manor on Wednesday, March 9, for the first round of the PIAA Tournament.

Husted Leads DuBois to D8-9-10 5A Subregional Title; Clearfield, Brookville Fall in Subregion Games
Back-to-Back: Franklin Uses 13-0 Fourth Quarter Run to Beat Seneca for D10 Class 3A Boys Championship
This website or its third-party tools process personal data.In case of sale of your personal information, you may opt out by using the link Do not sell my personal information.
×
Manage consent