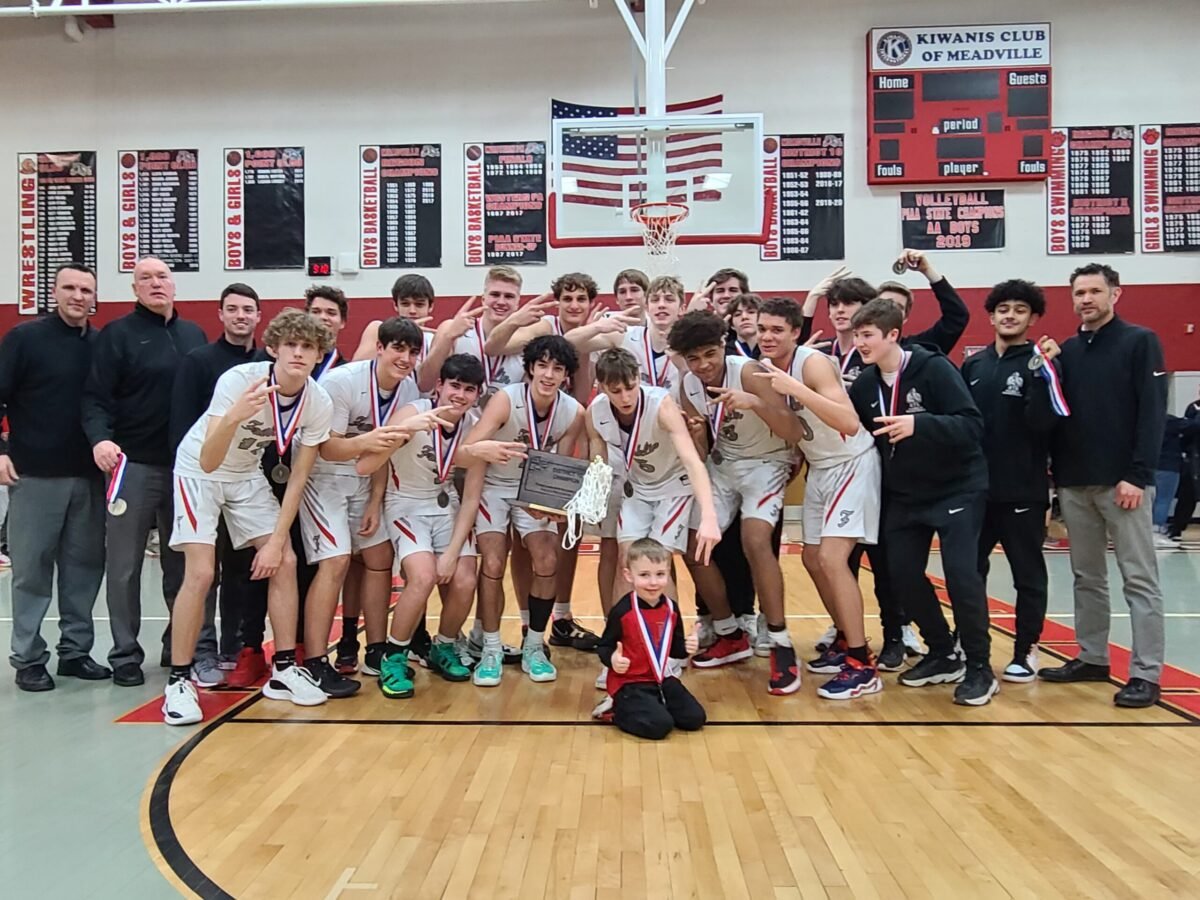 MEADVILLE, Pa. – It happened in the blink of an eye.

Top-seed Franklin was getting all it wanted from No. 2 Seneca in the District 10 Class 3A title game when Easton Fulmer decided to take matters into his own hands.

With Franklin up 44-42 to start the fourth quarter, Fulmer went on a personal 9-0 run, part of a collective 13-0 run that was punctuated by a steal and dunk from Damon Curry to lift the Knights to their second-straight D10 crown, 63-53.

It was part of a 33-point effort from the senior guard.

“It’s always challenging as a father,” Franklin coach Jason Fulmer said. “I’m ready to rip his head off at times, but he does so many good things. Sometimes he tries to do a little bit too much, but ultimately, he put us on his back in the fourth quarter. That’s one special thing that we have, that is when the lights get bright, he typically steps up and has the finishing touches. He’s put a ton of work in to get his game to where it’s at now.”

The run actually started late in the third quarter on a heads-up play by Fulmer. With the score knotted at 39 and the Knights (23-2) inbounding underneath their own bucket, Fulmer threw the ball off the back of the defender who had his back turned and turned it into a 3-point play.

Luke Guth followed that up with a three and a jam to make it 44-39, with Seneca’s (19-6) Justin Walker temporarily halting the momentum with a corner three to end the third.

Fulmer and Guth talked about repeating as D10 champs afterward:

To their credit, Seneca didn’t fold after the run, getting back within six at 59-53, but Fulmer went 6-of-6 and Guth 2-of-2 from the free-throw line in the fourth to help seal the deal.

Fulmer showed off his full arsenal, hitting from deep, driving to the bucket and going to the free-throw line. For the game, he was 13-of-13 from the charity stripe.

Franklin drained eight threes, with seven of them coming in the first half.

“The good thing about this year’s team is that now we can get to the rim,” coach Fulmer said. “We understood we had to get to the rim. They are high school kids, they love it, they want to go score. Am I hard on them? For sure, but it’s just passion. I’m excited for them. They know we have to go back to work and have some things to clean up.”

It was the Curry and Ethan Kibbe show early.

The Franklin sophomore and the Seneca junior seemingly went shot-for-shot in the first quarter, with Curry draining four triples in the opening eight minutes and Kibbe three

Franklin extended the lead to six on a Fulmer jumper to begin the second quarter, but Seneca had every answer in the first half.

A couple of putbacks from Young got them back within one at 26-25 and, after Franklin went up 33-27, Kibbe and Lucas Rupp drilled back-to-back triples to close the half, knotting it at 33.

Franklin’s Luke Guth goes in for a two-handed dunk during the third quarter of the District 10 Class 3A championship game against Seneca. Photo by Andy Close.

“Credit to Seneca, they played a hell of a game,” coach Fulmer said. “The first half they shot the lights out.”

Seneca briefly took the lead in the third quarter, 39-37 on a Kibbe layup, but Franklin held them without a bucket over the next four minutes until Walker’s three to end the quarter.

Curry finished with 19 points for Franklin and Guth 11.

Kibbe led Seneca with 21 points, while Young had 16 and Rupp seven.

Franklin’s reward for winning the D10 title is a date with Ellwood City in the first round of the PIAA playoff on Wednesday at Franklin. Ellwood was the top seed in the WPIAL playoffs but got upset by Avonworth in the quarterfinals and fell to the No. 6 qualifier out of District 7.

“We’re excited about it,” coach Fulmer said of the matchup with Ellwood City. “In years past, this was our goal (to win a D10 title), but this year, we want to take that next step.”

ERIE, Pa. – A 21-3 run over the second and third quarters propelled Girard to a 42-30 win over Mercyhurst Prep in the District 10 Class 3A consolation game Friday.

The Jackets trailed the Lakers, 10-9, with 5:30 to play in the first half. Just past the midpoint of the third quarter, Girard had a 30-13 advantage.

Mercyhurst Prep tried to stage a comeback, but couldn’t get enough stops defensively to seriously cut into the deficit.

Trey Battle had 12 points for the Lakers and Aronde Bridgett had 10.

Alex Henry had a game-high 16 points, including the first seven of the game, for Girard. Austin Shady added eight points and JJ Lehman and Geremia Dell’omo five each.

Girard will face District 6 runner-up Bishop Guilfoyle on March 9 at a time and location to be determined.

Allegretto Free Throws Lift Ridgway to Third D9 2A Title In Four Years; Karns City Takes Third
Brockway Girls Win First Title in 50-Year History Taking Home 2A Crown
This website or its third-party tools process personal data.In case of sale of your personal information, you may opt out by using the link Do not sell my personal information.
×
Manage consent