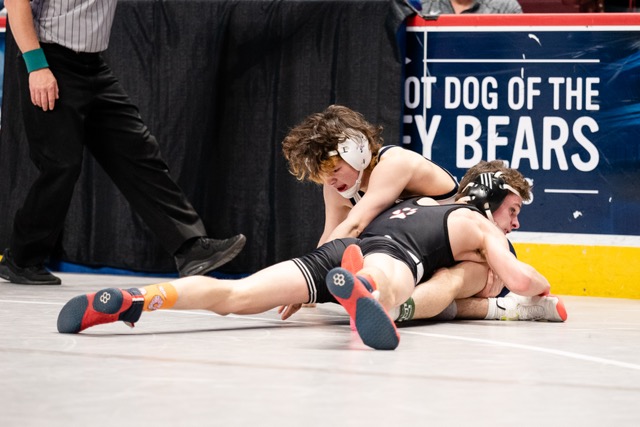 HERSHEY, Pa. – A total of 18 Class 2A District 9 and 10 wrestlers, as well as seven in Class 3A, advanced to the quarterfinals at the PIAA wrestling championships Thursday at the GIANT Center.

Among those advancing to the quarterfinals are defending state champion Louie Gill of Hickory in Class 2A at 106 pounds and Jake VanDee of Cathedral Prep in Class 3A at 126 pounds.

The 106-pound weight class in Class 2A saw three District 9 and District 10 wrestlers move on to the quarterfinals, as Saegertown’s Carter Beck got a 10-4 decision over Clayton Carr of Wyalusing and Cranberry freshman Elijah Brosius earned an 8-1 decision over Seth Kolb of Benton.

At 113 in Class 2A, defending state medalist Hunter Robison of Saegertown got a pin at the tail end of the first period against Aidan Gruber of Leighton.

Among those advancing in Class 3A are a quartet of Clearfield Bison, Brady Collins at 126, Mark McGonigal at 172, Carter Chamberlain at 189 and Oliver Billotte at 285.

In Class 2A, Harbor Creek’s Connor Pierce, in search of his fourth PIAA medal and first gold, got an 11-5 decision over Kole Biscoe of Southern Columbia in the first round.

Here’s a breakdown of the rest of the wrestlers moving on to the quarterfinals.

D9/10 Teams Learn Sites/Times for Saturday’s Second Round PIAA Basketball Playoffs
March 11, 2022 District 9 and District 10 Basketball Schedules Powered by Hunter’s Station Golf Club
This website or its third-party tools process personal data.In case of sale of your personal information, you may opt out by using the link Do not sell my personal information.
×
Manage consent