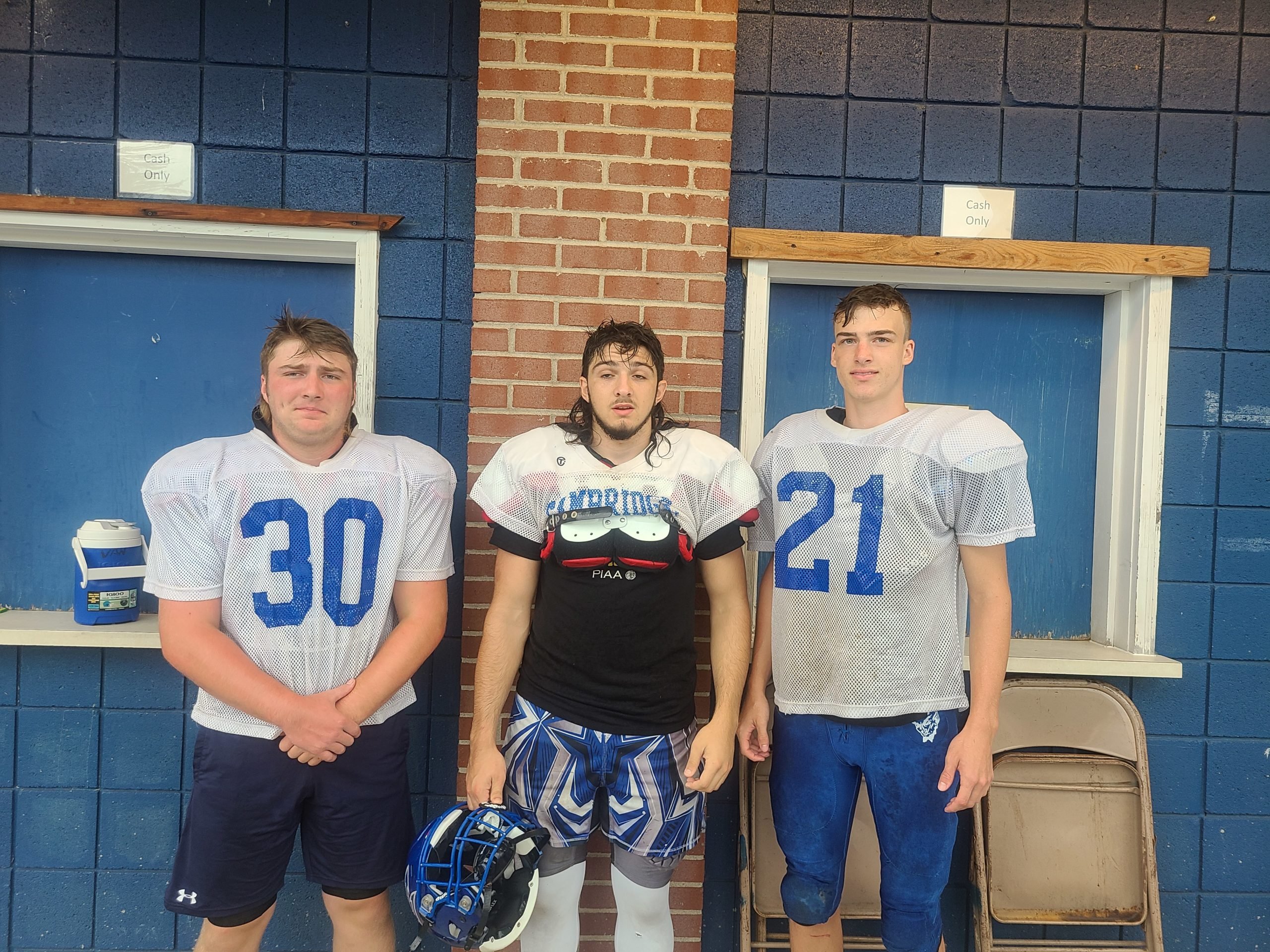 MEADVILLE, Pa. – Meadville looks every bit the part of a Region 5 favorite following an impressive 47-7 win over General McLane.

The Bulldogs bounced back from a 50-48 loss to Grove City, as Brady Walker led another big rushing effort for the Bulldogs, touting the ball for 173 yards and three scores.

The Bulldogs scored the game’s first 41 points, including four touchdowns in the second quarter to put the mercy rule into effect for the second half.

Walker scored on runs of 32, 38 and 22 yards for the Bulldogs, who also got touchdowns from Brighton Anderson (fumble return), Griffin Buzzell and Khalon Simmons.

Gavin Longstreth completed his lone pass to Simmons for a 43-yard score.

John Amon found paydirt for GM in the fourth quarter.

Eckstrom took the opening kickoff 78 yards for a touchdown and scored on runs of 18 amd 68 yards. Benji Bauer had three rushing touchdowns, including an 88-yard run, and Shawn Pascuzzi added another as the Knights moved to 2-0 on the season.

Eisenhower had a 27-0 lead before Union City got on the board thanks to a 48-yard scamper from Kyler Shaffer. The Knights led 34-6 at the half.

The quarterbacks had nine pass attempts, combined. Eisenhower’s Garrett Jenson was 4-5 for 97 yards and Shaffer was 2-4 for 29 yards.

Shaffer ran 17 times for 175 yards and two touchdowns. Owen Kerns and Danny Ruckman each had 85 yards and a score.

WATTSBURG, Pa. – Garrett Hodak rushed for 250 yards and three touchdowns as Cambridge Springs picked up its first win of the season, 30-6 over Seneca.

The Blue Devils led 6-0 at halftime, outscoring the Bobcats 24-6 in the second half.

Van Jones also eclipsed 100 yards on the ground and scored a touchdown for Cambridge Springs.

GREENVILLE, Pa. – Lakeview struck first, but it was all Greenville after that.

The Trojans scored four touchdowns in the second quarter en route to a 49-15 win over the Sailors for their first win of the season.

Lakeview quarterback Gavin Murdock scored on a 2-yard run at the midway point of the first quarter and punched in the 2-point conversion for an 8-0 Lakeview lead. The Trojans scored three times in just over six minutes in the second quarter, however, as Swartz found paydirt twice and Malachi Hyde scored on a 64-yard run.

Murdock stopped the bleeding with a 1-yard plunge that made it 21-15. Swartz scored again with just 10 second left in the half to give Greenville a two-score lead.

Swartz scored two more times in the third quarter as the Trojans put the game out of reach.

Hyde finished with 87 yards on the ground for the Trojans and Murdock led Lakeview with 81 rushing yards and 159 passing yards.

GIRARD, Pa. – Hickory bounced back from a tough opening loss with a 35-7 win over Girard.

Sean Kennedy scored on a pair of touchdown runs for the Hornets, the second of which, a 2-yarder, gave them a 21-0 lead in the third quarter. That was followed by an 8-yard hook-up from Woods to Whitehead.

Scullin and Woods put the finishing touches on the evening with a 90-yard pitch and catch to put the mercy rule into effect after the 2-point conversion.

Woods threw for 260 yards and Kennedy led the ground game with 85 yards.

The Steelers scored 28 points in the second quarter, which began with a Lamont Samuels 18-yard touchdown run. Wilson was on the receiving end of a pair of touchdown passes from Trian Holden and Kabron Smith and Stallworth had a 44-yard scoring scamper.

Samuels scored two more times in the third quarter, one rushing, one receiving.

Stallworth led the way with 130 yards on the ground, while Samules had 95 receiving yards.

SHARON, Pa. – Sharon trailed 21-0 in the fourth quarter before a late rally came up just short in a 21-14 loss to University Prep.

Mike Rodriques scored on a 4-yard run in the fourth quarter and the Tigers recovered an onside kick, which was quickly followed by a Cortez Nixon 5-yard touchdown plunge to make it 21-14 with 1:47 to play in the game.

That was as close as the Tigers got, however, as University Prep was able to close it out.

Rodriques threw for 147 yards and rushed for 33 more for the Tigers, while Ja’on Phillips had 100 yards receiving.

Nate Miller also scored on a touchdown pass from Brayden McCloskey, with the Raiders also recording a safety.

Tewell threw a pair of TD passes and ran for two more in the win.

Ben Campbell opened the scoring with a 14-yard run, then Tewell sandwiched an 11-yard pass to Lloyd Fountain between a 3- and 9-yard run to give the Wildcats a 28-0 advantage.

Tewell’s fourth score was a 50-yard pass to Jake Kelly.

Landon Wayne and Ian Dick each added a rushing touchdown and Ken Jarvis had a fumble return for a score.

David White led the Wildcats in rushing yards with 80.

Connor Burns had 67 yards on the ground for Maplewood.

FRANKLIN, Pa. – Jared Gennuso rushed for three touchdowns and Tyler Corbin tossed a pair of touchdown passes to Logan Frazao as Fairview improved to 2-0 with a 41-7 win over Franklin.

Gennuso scored on runs of 23, 22 and 9 yards, while Corbin’s touchdown tosses to Frazao went for 18 and 12 yards. Corbin also added a touchdown on the ground.

Watch Live: Sheffield at Union/A-C Valley Football Powered by the Allegheny Grille of Foxburg
Lent, Smethport Get Win Over Visiting Brockway
We use cookies on our website to give you the most relevant experience by remembering your preferences and repeat visits. By clicking “Accept All”, you consent to the use of ALL the cookies. However, you may visit "Cookie Settings" to provide a controlled consent.
Cookie SettingsAccept All
Manage consent