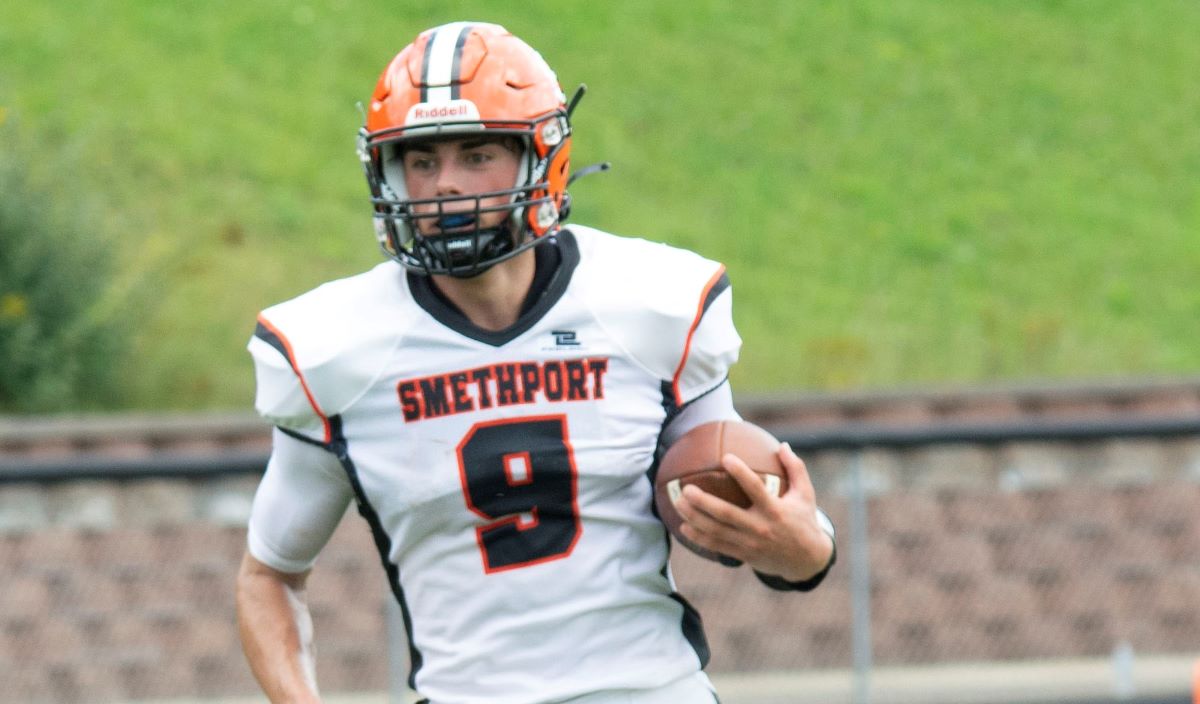 SMETHPORT, Pa. – Smethport held its collective breath when star quarterback Noah Lent went down with an apparent leg injury after a big hit late in the second quarter of Friday’s game against Brockway.

Lent spent several minutes on the ground before he got to his feet then dusted himself off in the locker room at halftime and came out in the second half and scored three rushing touchdowns in 35-19 victory for the Hubbers (2-0).

Lent started the second half with runs of 15, 29, 21, 25, and 15 before his 7-yard scamper in the final minute of the third quarter gave Smethport a 20-7 lead. The Hubbers led by at least two scores the rest of the way.

Early in the fourth quarter, Lent broke free on an electrifying 29-yard touchdown run and completed the 2-point conversion pass to Brandon Higley to make it 28-7.

Travis Cooney, who had a big game on both sides of the ball, and Lent, who was the Jim Kelly Player of the Game Powered by th Allegheny Grille of Foxburg, talked about the win.

Brockway kept fighting, as freshman quarterback Brayden Fox connected on a pair of touchdown passes to Alex Carlson in the fourth quarter of 14 and 10 yards, but there was just way too much from Lent and company.

With 4:40 to go in the game, Lent capped his brilliant night, which featured 170 yards on the ground on 20 carries, with a 25-yard scoring run.

Through two games this season, Lent has six rushing touchdowns and five more through the air.

The Hubbers got things going right away, as Ryan Mason broke free from the Brockway secondary and hauled in a 57-yard touchdown pass from Lent just 1:11 into the game.

A big punt return from Mason setup up the Hubs’ with a short field at the Brockway 25 on their next drive, and Lent punched it in from a yard out to make it 14-0.

Smethport held Brockway’s high-flying offense in check for much of the first half, but the Rovers cashed in early in the second quarter, converting three fourth downs on a drive that ultimately led to a Fox to Jalen Kosko 14-yard touchdown off a deflected pass.

That score held until Lent’s touchdown run late in the third.

Ryan Pelchy had a strong game on the ground as well for Smethport, carrying the ball for 82 yards, while Lent completed 4-of-8 passes for 76 yards, one touchdown, and one interception.

Fox, making his second career start, completed 23-of-31 passes for 309 yards and three touchdowns, while Carter Hickman had 55 rushing yards and 68 receiving yards. Matt Pyne had 122 receiving yards to lead the Rovers.