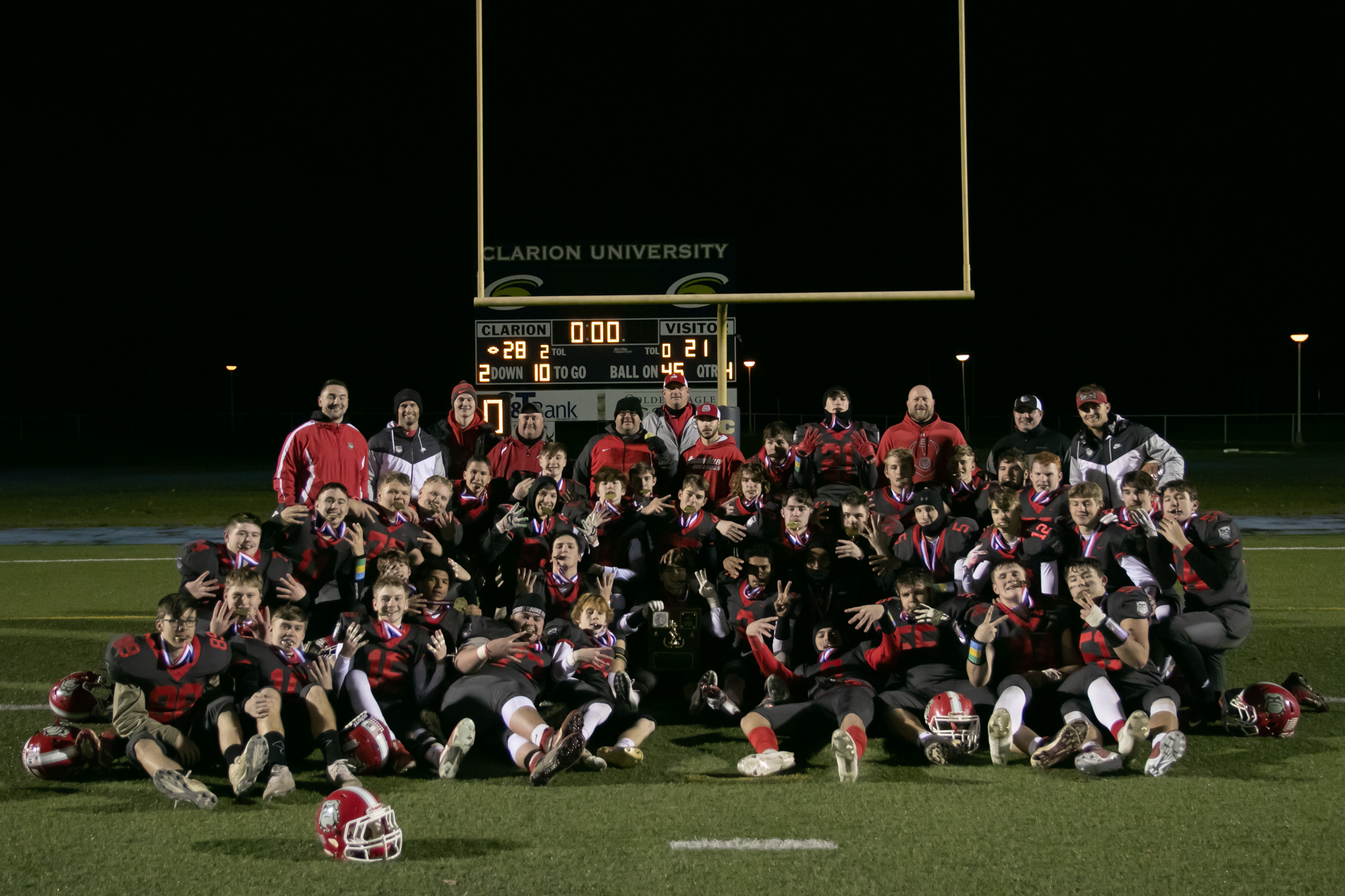 Ray Shreckengost punched in a one-yard touchdown run to break a 21-21 tie with 4:39 left in the fourth quarter to help top-seeded Redbank Valley to their second straight District 9 Class 1A title with a 28-21 victory over third-seeded Union/A-C Valley at Clarion University’s Memorial Stadium Friday night.

Redbank Valley won the regular-season matchup, 28-7 back in October and it looked like history could repeat itself as the Bulldogs jumped out to a 21-0 lead in the first quarter.

Bryson Bain connected with Chris Marshall for a 64-yard score less than a minute into the game.

“It definitely gets the momentum on our side,” Bain said of getting the first touchdown. “They gave us exactly what we wanted with Chris and I just found him”

Shreckengost helped the Bulldogs extend the lead to 14-0 capping off a 14 play, 65-yard drive with a 10-yard rushing touchdown.

Carsen Rupp made a huge special teams play as he took the blocked punt 27 yards for a touchdown to help the Bulldogs go up 21-0 before the second quarter.

The Falcon Knights responded, scoring 21 unanswered points and tying the game with 4:49 left in the third quarter.

Skyler Roxbury got the Falcon Knights on the board catching a 12-yard pass from Dittman with 4:27 left in the first half.

Redbank Valley responded taking the ball down to the Falcon Knights three-yard line before a Shreckengost fumble that was recovered by Landon Chalmers in the endzone.

Union/A-C Valley made a drive down to the Bulldogs 33 but Zeldon Fisher intercepted Dittman at the 21-yard line and the Bulldogs held on to a 21-7 lead into halftime.

The Falcon Knights made quick work coming out of the halftime break going 60 yards in six plays that ended with a one-yard Ryan Cooper score three minutes into the third.

A fumbled snap on the PAT attempt ended with Cooper running into the endzone for the two-point conversion and the deficit was cut to 21-15.

On the ensuing drive for the Bulldogs, a catch and fumble by Tate Minich gave the Falcon Knights the ball at the Redbank 37.

Dittman would find Cooper in the endzone 10 plays later which tied the game at 21-21 after missing the PAT attempt that would’ve given them the lead.

“Union/A-C Valley is a tremendous football team,” Gold said about the Falcon Knights. “They’re extremely well-coached. We were fortunate to get up early and how it went was how I expected.”

The fourth quarter belonged to the Bulldogs.

Union/A-C Valley would go three-and-out in their ensuing drive and elected to punt on a 4th-and-6 with a little over three minutes left.

Gunner Mangiantini sealed the deal on the ground getting a pair of first downs they needed to be able to run the clock out.

“This is two years in a row now that Gunner’s been able to seal it for us.” Gold said about Mangiantini coming into the game late. “We’re in a situation where it was second and 18 and we were still able to get the yards we needed to seal it.”

Shrekengost led the Bulldogs run game with 93 yards on 19 carries and a pair of scores while Mangiantini had four carries and 22 yards in the final three minutes of the game.

Bain led the offense going 19-for-28 and 287 yards with a touchdown pass. Marshall had six grabs for 92 yards and a score while Ashton Kahle chipped in for three catches and 70 yards.

Dittman paced the Falcon Knights offense going 16-for-23 with 175 yards, a touchdown and one interception.

Roxbury had five catches for 76 yards and Cooper grabbed four for 76. Caden Rainey paced the running backs with seven carries for 41 yards with Dawson Camper running 14 times for 30 yards.

With the win, Redbank Valley advances to play Northern Bedford, a 35-22 winner over Reynolds in the PIAA quarterfinals next week.

“It means a lot to our program,” Marshall said about winning the District 9 title. “It leaves a legacy for us. Simple as that. It’s what we do.”

Garing, Anderson Run Karns City to Second Straight D9 Class 2A Football Title
Farrell Shows Resiliency in Class 2A First Round win Over Westinghouse
This website or its third-party tools process personal data.In case of sale of your personal information, you may opt out by using the link Do not sell my personal information.
×
Manage consent