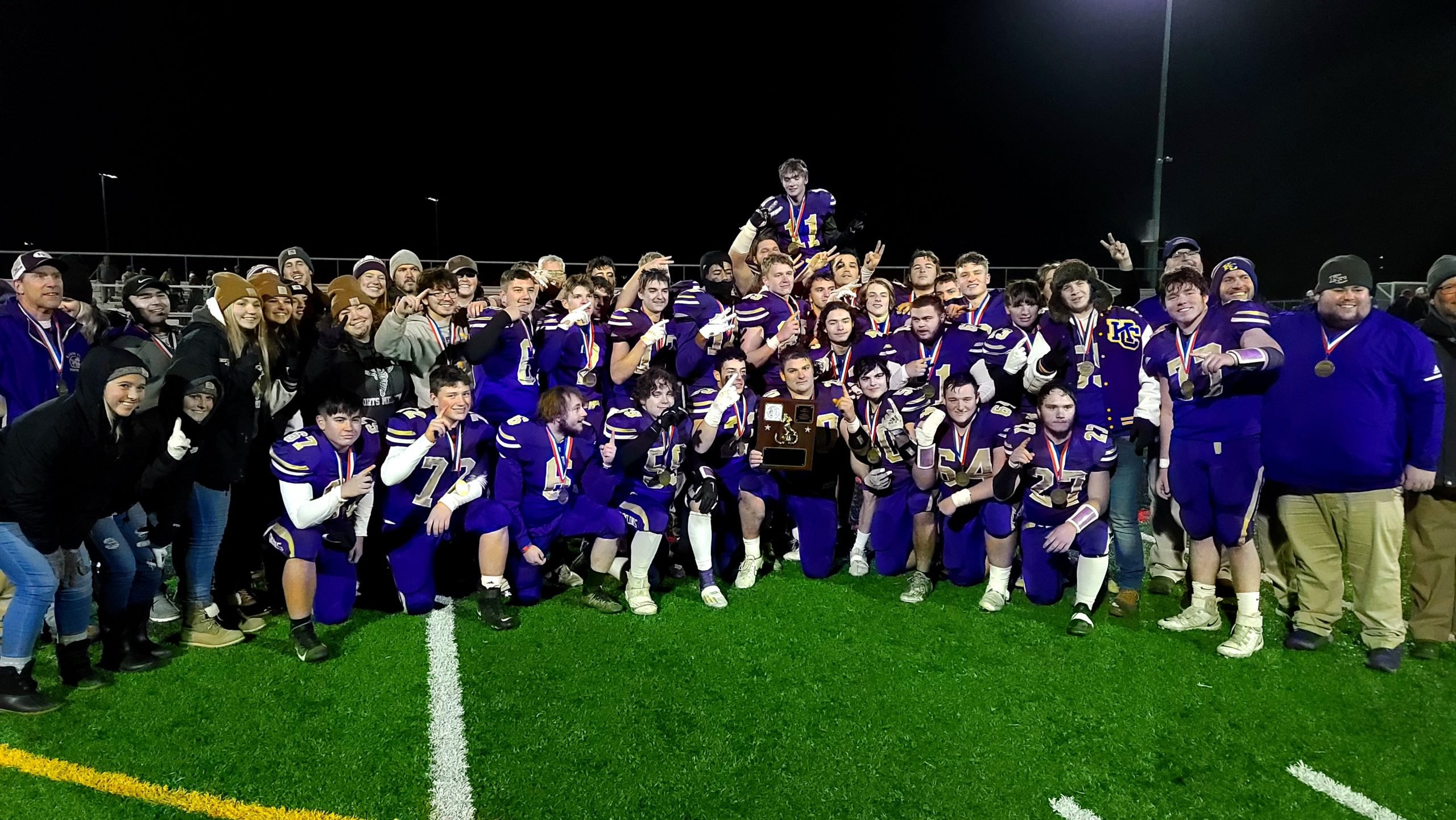 BROCKWAY, Pa. – Karns City’s running back tandem of Luke Garing and Jayce Anderson combined for more than 200 rushing yards and three touchdowns to lead the Gremlins to a 35-7 win over Ridgway in the District 9 Class 2A championship Friday.

Both backs had big second halves as Karns City turned a 13-7 halftime lead into a 28-point victory. Garing and Anderson each had 33 yards at halftime and finished with 83 and 120 yards, respectively. Garing had a pair of touchdowns and Anderson the final score of the game as the Gremlins claimed their second straight D9 title.

“It feels amazing,” Garing said. “We came with our game plan to run the ball. They really stopped it in the first half, but we came out hard, the line did a great job and made some holes.”

The Gremlins stuck to their game plan throughout, attempting just three passes in the contest. Karns City ran the ball 52 times for 316 yards and five scores. Defensively, the Gremlins limited the Elkers to just 179 total yards.

It was Nate Garing who got the scoring started. Following turnovers by each team, the Gremlins took over near midfield. Nate Garing took a handoff off left tackle, squirted through the front-7 and raced 34 yards to the end zone for a 7-0 lead.

Luke Garing polished off a long Gremlins drive with a 1-yard plunge just over a minute into the second quarter to make it 13-0.

Ridgway drove inside the 20 with just over two minutes to play in the half, but Jack Benninger’s 36-yard field goal attempt was just short.

Karns City quarterback Eric Booher dropped back on first down and fired a pass to the left sideline. Camron Marciniak leaped in front and picked it off to give the ball back to the Elkers.

With less than a minute to play in the half, Marciniak hauled in a 16-yard Dominic Allegretto pass to cut the deficit to 13-7.

Neither team was able to find the end zone in the third quarter, but Luke Garing ran in his second score, a 4-yarder, and the conversion a minute into the fourth quarter to extend the lead to 21-7.

“We’ve just got to stick to our game,” Luke Garing said the team told each other at halftime. “The line needs to keep making holes and the backs keep hitting them.”

Anderson had a 37-yard run to get Karns City deep into Ridgway territory and Luke Cramer finished the drive with an 11-yard run to make it 28-7 with five minutes left.

Anderson put the final points on the board with just under three minutes to go on a 7-yard run.

Allegretto provided the bulk of Ridgway’s offense. The dual-threat quarterback was 11-23 passing for 112 yards with a TD and two interceptions and ran 17 times for 45 yards.

Marciniak had five receptions for 38 yards and a score and ran four times for seven yards. Eric Salberg had five catches for 76 yards and five rushes for 20 yards.

Luke Garing had 18 carries for 83 yards and two touchdowns, while Anderson had 14 carries for 120 yards and a score. Their totals also put both backs over 1,000 rushing yards for the season.

“It’s awesome, me and Jayce knew going in that we were going to be battling for 1,000 so it’s awesome that both of us were able to hit it, credit to our line,” Luke Garing said.

Booher was 0-3 passing with a pair of interceptions and ran eight times for 54 yards. Nate Garing had five carries for 49 yards and a score.

District 9 title in hand, the Gremlins will face either District 10 champion Farrell or Pittsburgh City League (District 8) champion Westinghouse in the PIAA quarterfinals next week. Farrell and Westinghouse square off at Cupples Stadium in Pittsburgh at 1 p.m. Saturday.

Prep Rolls Past East Stroudsburg South in Class 5A First Round; McDowell Rallies Past Allderdice in 6A
Redbank Valley Outlasts Union/A-C Valley for Second Consecutive D9 1A Championship
This website or its third-party tools process personal data.In case of sale of your personal information, you may opt out by using the link Do not sell my personal information.
×
Manage consent