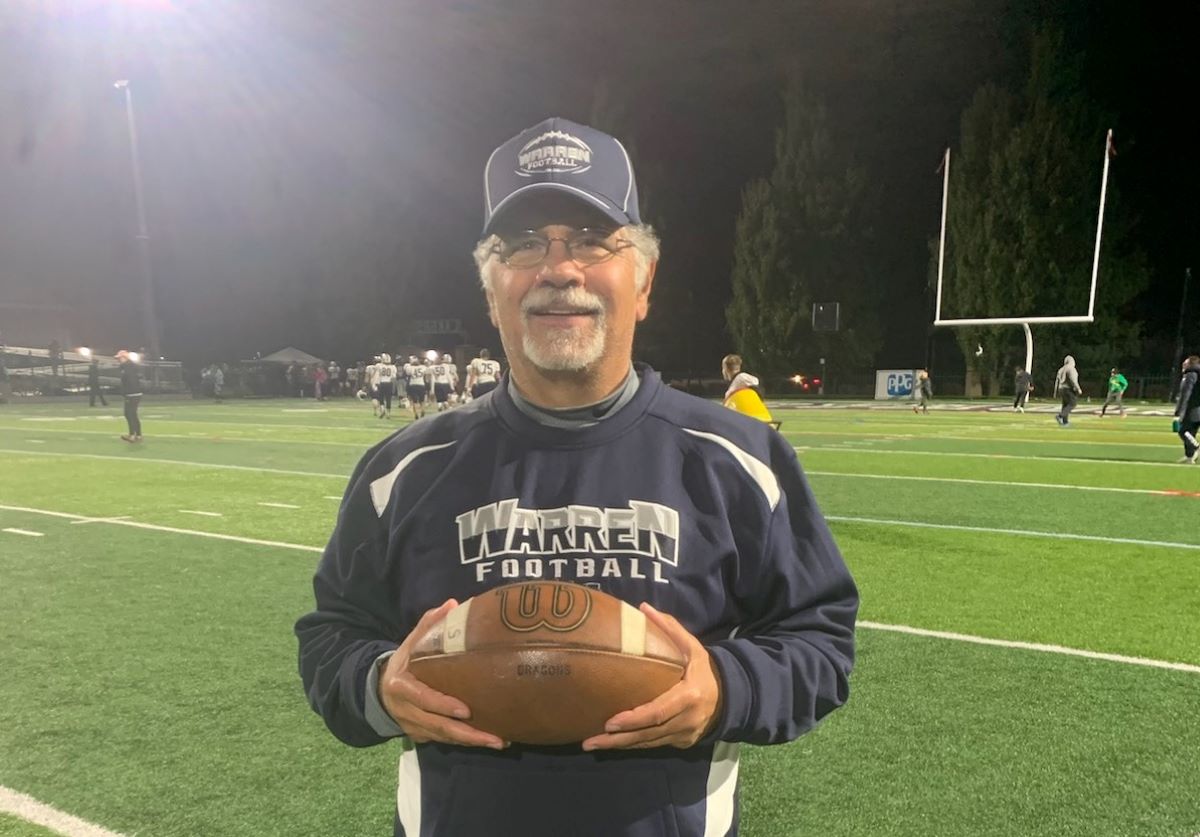 The win was the 28th at Warren for Morelli, who also served as the head coach at Ridgway for 11 years and Cameron County for three.

He gave tons of credit to his defense while speaking on the GWM Extra Points Show. Watch here:

Quarterback Eric Dippold had a hand in both of Warren’s touchdowns in the first half, which proved to be all the scoring they needed.

Dippold scored on a 1-yard touchdown run in the first quarter to make it 6-0 and directed a late Warren drive in the second quarter, which he capped with a 20-yard touchdown pass to Tommy Nyquist.

Warren improved to 4-3 with the win, while Mercyhurst Prep drops to 3-4.

MEADVILLE, Pa. – McDowell got the bad taste out of its mouth from a shutout loss to rival Prep last week in a big way, beating Meadville 49-19 and handing the Bulldogs their first loss of the season in the process.

The Trojans made a statement right from the get-go, going 80 yards on their opening drive which was capped by an Artis Simmons 5-yard touchdown run.

Ben Moore had a strong game at quarterback for the Trojans, rushing for a pair of second-quarter touchdowns as McDowell built a 35-12 halftime advantage. He also added a 16-yard touchdown pass to Ray Jackson in the third quarter.

Simmons’ second touchdown of the game, a 6-yard run, made it 35-12 just before halftime, while Christian Santiago also had a touchdown run in the first half for the Trojans (5-2).

Meadville’s Khalon Simmons had another strong game in defeat. He rushed for three touchdowns, including a 48-yarder in the fourth quarter, and finished with 165 yards on the ground.

HOLLIDAYSBURG, Pa. – Ethen Knox was at it again for Oil City in its non-region game at Hollidaysburg, rushing for 403 yards and five touchdowns in a 38-21 win.

The victory snaps a two-game skid for the Oilers (5-2) who were coming off losses to Northwestern and Meadville.

This is the fifth time Knox has rushed for 400 yards in a game this season.

Knox scored on runs of 28 and 23 yards in the first quarter to give the Oilers the early edge, but Hollidaysburg rallied to take a 21-16 advantage early in the third quarter on Tucker Rossman’s 13-yard touchdown run, taking advantage of a Knox fumble.

The junior running back bounced back in a big way, however, scoring on a 7-yard run in the third quarter as Oil City re-took the lead and adding on with scoring scampers of 17 and seven yards in the fourth quarter, upping his season total to 30 touchdowns.

Rossman finished with 261 yards through the air for Hollidaysburg, including a 16-yard passing touchdown to Gavin Bell in the second quarter.

Pascuzzi was 16-21 passing for 245 yards and two touchdowns. The 16 completions were two more than his previous season and a career-high for attempts (14 against Cambridge Springs) and the 245 passing yards were a career-high and most in a game for the Knights since Owen Trumbull threw for 252 against Iroquois in 2020.

Lindell scored on runs of 3 and 33 yards in the third quarter to help break the game open.

The Knights (7-0) took the opening possession and wasted little time getting on the board as Pascuzzi connected with Keegan Eckstrom for a 41-yard touchdown pass.

Saegertown (1-6) answered with a quick-strike drive of its own. Sully Zirkle hit Henry Shaffer for a 35-yard completion, then on 4th-and-goal from the 18 found Damen Rossey all alone in the corner of the end zone.

Benji Bauer scored on a 24-yard run late in the first quarter, and on a 44-yard screen pass near the midpoint of the second quarter to give Eisenhower a 21-6 lead at the half.

Lindell capped the Knights’ first possession of the second half with his 3-yard touchdown run. Late in the third, Lindell took a handoff straight up the middle, broke a handful of tackles, and raced 33 yards to give Eisenhower a 35-6 lead.

Shaffer caught the ensuing kickoff at the 15, initially ran it back up the middle, found a seam, and raced down the sideline to cut the lead to 35-12.

Zirkle closed out the scoring with a 7-yard run in the early stages of the fourth quarter.

Zirkle was 9-17 for 150 yards with a touchdown and an interception. No Panther had more than eight rushing yards, and as a team, Saegertown had 29 carries for 17 yards.

Lindell had five carries for 67 yards and two scores. Bauer finished with 169 total yards (106 rushing, 63 receiving) and two touchdowns, and was one of three receivers with at least 60 yards for the Knights (Wyatt Lookenhouse-60, Kris Bunk-66).

Eisenhower will travel to Northwestern next Saturday with a chance to claim the Region 2 title outright.

Wakeem Page also had a big game for Prep (5-2), which kept the momentum going from its shutout win over McDowell last week. Page scored on a 50-yard run to get the scoring and returned a blocked punt for a touchdown on the ensuing Benedictine possession to make it 14-0.

Hollingsworth followed with a pair of touchdown runs, then caught a touchdown pass from quarterback Luke Costello. His 85-yard scoring scamper capped his brilliant half and gave Prep a 48-7 lead at the break.

GROVE CITY, Pa. – Hickory got defensive in getting back on the winning track, forcing six turnovers, including four interceptions in a 24-14 win over Grove City.

Timmy Krivosh, Peyton Lawrence, Luke Nevil, and Nash Porada all had interceptions for the Hornets (3-4).

Hickory was able to build a 14-0 lead in the first half thanks in large part to Will Acrie, who caught a 32-yard touchdown pass from Logan Woods in the first quarter and scored on a 4-yard run in the second quarter.

Grove City (4-3) cut the margin to 14-7 at halftime after an Anthony Nemec 10-yard touchdown run.

Porada caught a 21-yard touchdown pass from Zander Telesz less than two minutes into the third quarter and, after Grove City’s Nathan Greer returned the ensuing kickoff for a touchdown, the Hornets drove down the field and Lukas Jones booted a 34-yard field goal.

Telesz finished with 142 yards through the air for Hickory, with Porada accounting for 67 yards and Acrie 50.

Nemec finished with 120 yards on the ground for Grove City.

CORRY, Pa. – Corry continued its strong play in the second half of the regular season with a 32-12 Region 5 win over North East.

Carey and Savitz got the scoring going for Corry in the first quarter on a 33-yard touchdown, which was followed by a Jackson Humes scoring strike to Zane Strong that tied the game, 7-7.

SLIPPERY ROCK, Pa. – Jayveerh White had a monster game on the ground, rushing for 246 yards and a touchdown as Sharon outscored Slippery Rock 13-0 in the second half in a 20-6 victory.

White broke free on an 80-yard touchdown run in the third quarter, and Mikey Rodriques scored his second touchdown of the game in the fourth quarter, a 1-yard plunge, to put the game away.

Sharon responded, taking a 7-6 lead on Rodriques’ 5-yard run and the extra point.

Rodriques combined for 105 yards rushing and passing for the Tigers (4-3).

Mokel had 91 yards through the air for Slippery Rock.

Sheeder accounted for a pair of touchdowns on the ground, opening the scoring on a 12-yard run in the second quarter.

The Lancers led 14-0 in the third quarter after Tyler Mayo’s 12-yard run, but Wilmington rallied with three-straight touchdowns to take a 19-14 lead.

Buddha Book’s 36-yard touchdown pass to Ben Miller gave Wilmington the lead, but the 2-point conversion was no good.

STONEBORO, Pa. – Mitchell Tingley had a monster game on the ground, accounting for 283 yards and four touchdowns as Lakeview earned a 41-14 win over Cambridge Springs.

FAIRVIEW, Pa. – A week after Fairview watched Corry rally to beat them, the Tigers staged a comeback of their own in a 27-24 win over Girard.

The Tigers overcame deficits of 17-7 (halftime) and 24-14 in the victory, with Michael Gennuso drilling a 35-yard field goal at the buzzer.

Gabe Mesmer’s touchdown run gave Girard the lead in the first half, but Tyler Corbin broke free on a 70-yard scoring run to cut the deficit to 17-14 in the third quarter.

HARBORCREEK, Pa. – Fort LeBoeuf overcame a strong Harbor Creek start to rally for a 28-17 win over the Huskies.

Aiden Lesik’s touchdown run gave the Bison a 21-17 lead and Connor McChesney had a touchdown run in the fourth quarter to help put the game away.

PITTSBURGH – Khalil Taylor ran for 151 yards and two touchdowns as Westinghouse stayed perfect with a 39-6 win over Butler.