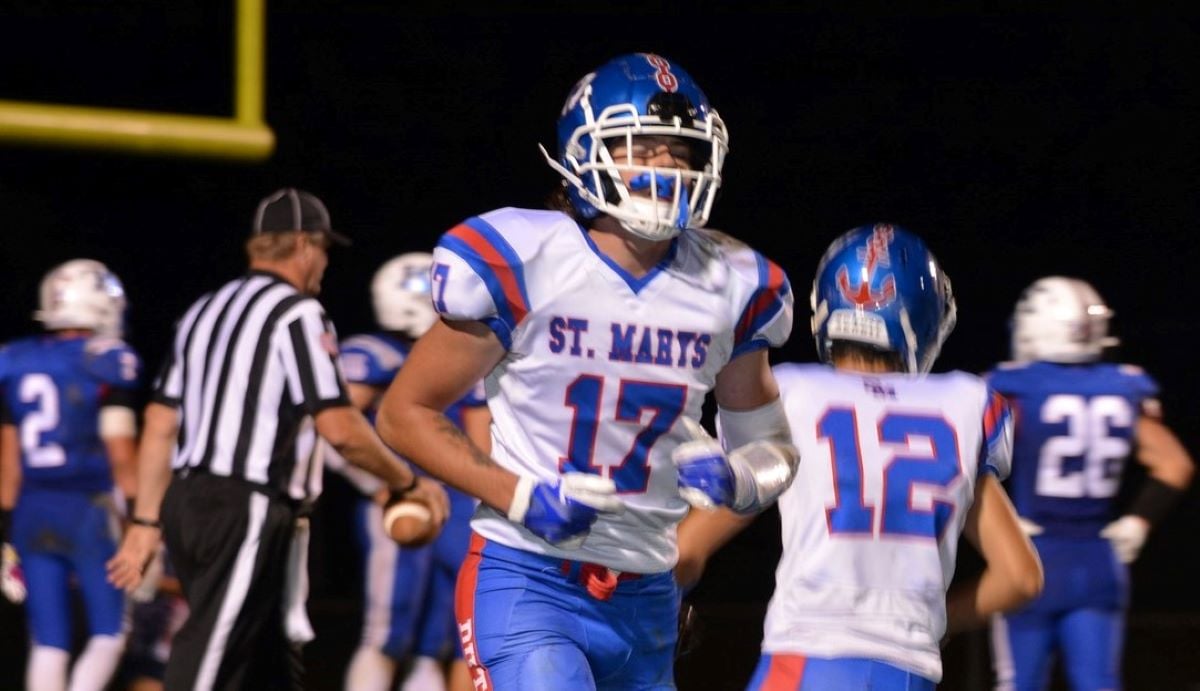 Carter Chadsey had a pair of TD catches for St. Marys in its win over DuBois Friday. Photo by Kelli Surra

In a back-and-forth ball game, it was the Dutch (5-2) who struck last going on a game-winning drive after DuBois had tied the game at 27 with just under six minutes to play on a 6-yard Cam-Ron Hayes to Kaden Clark touchdown pass.

A 55-yard interception return for a touchdown by Garrett Nissel knotted the game at 20 just over 2 ½ minutes into the second half.

St. Marys retook the lead, 27-20, on a 3-yard Charlie Coudriet touchdown run before Hayes to Clark retied it again.

The contest was also tied at seven early in the second quarter before St. Marys got a 9-yard Coudriet to Collin Reitz touchdown pass followed by a 3-yard Coudriet to Carter Chadsey scoring pass to make it 20-7.

DuBois got within seven, 20-13, at halftime when Hays hit Nathan Kougher with a 41-yard scoring pass late in the first half.

Coudriet was 18 of 30 passing for 277 yards and three touchdowns while also tossing a pair of interceptions. He also added five carries for eight yards.

Chadsey caught eight passes for 105 yards and two touchdowns while Reitz had six grabs for 91 yards and a score.

Davis ran 17 times for 146 yards and the game-winning score.

Brendon Orr caught three passes for 42 yards and a touchdown for the Beavers, who were outgained 434 yards to 187 yards.

KARNS CITY, Pa. – Scoring the first 15 points of the game, the Karns City Gremlins held off Punxsutawney’s second-half rally for a 15-13 win.

The Chucks scored on Justin Miller’s two-yard run to cut it to two points late in the third quarter, but the Gremlins stopped Miller’s two-point conversion run to set the final score.

Earlier, the Gremlins (4-3) built to a 9-0 lead by halftime. Colson Ritzert kicked a 23-yard field goal and quarterback Eric Booher scored on a 13-yard run.

Then in the third quarter, Booher tossed a 10-yard TD pass to Micah Rupp to make it 15-0 midway through the quarter.

Chucks running back Zeke Bennett got his team on the board with a 1-yard run. Then his 50-plus run set up Miller’s TD run, but Bennett left the game with an injury and finished with over 100 yards rushing.

The Chucks (3-4) had a chance to score late in the game, but Seth Moore’s pass from the 21-yard line was intercepted by the Gremlins’ Nate Garing at the goal line late in the fourth quarter to help seal the win for the Gremlins.

COUDERSPORT, Pa. – Andrew Schenfield threw for a career-high six touchdowns to lead Otto-Eldred to a 39-18 win at Coudersport.

Against a team that hadn’t given up a touchdown in three weeks, Schenfield went 21 of 33 for 396 yards with four scoring tosses to Ray’Shene Thomas. Thomas caught seven passes for 197 yards.

Ethan Ott ran 26 times for 237 yards and three touchdowns for Coudersport. John Wright was 5 of 15 passing for 71 yards.

BROOKVILLE, Pa. – Jackson Zimmerman ran for over 200 yards for the second straight game, leading Brookville to a 41-0 shutout of visiting Bradford.

After going for 237 yards and two TDs in last week’s win over St. Marys, the Raiders senior rushed for 233 yards on 23 carries with first-half TD runs of 1 and 70 yards.

Noah Peterson completed 11 of 12 passes for 137 yards with TD passes to Brayden Kunselman covering 19 and 32 yards. He caught eight passes for 96 yards.

Wagner was 14 of 24 passing for 221 yards with two interceptions while also rushing three times for 32 yards and a touchdown.

He threw a pair of scoring passes to Tate Minich, who caught five passes for 113 yards, and one to Aiden Ortz, who caught four balls for 48 yards.

Drew Byers went over 100 yards rushing for the Bulldogs rushing 20 times for 101 yards and a score. Braylon Wagner and Cole Bish also scored on the ground for Redbank Valley (7-0), and Bish returned a punt 15 yards for a touchdown.

West ran 21 times for 102 yards in relief of Ricky Zampogna, who got hurt in the first half after carrying the ball eight times for 30 yards for the Wolves (1-6).

Kyle Zook went 1-for-14 for 27 yards and was picked off four times.

RIMERSBURG, Pa. – Scoring three touchdowns in the final 7:37 of the game, Port Allegany pulled away for a 42-14 win over Union/A-C Valley at Union High School.

The Gators (6-1) led 22-6 going to the fourth quarter before a 2-yard Blaine Moses touchdown run with 7:37 to play in the game started to put the game away.

After a 35-yard Owen Bish touchdown run for the Falcon Knights (3-4) cut the deficit to 36;14 with 1:33 to play, Peyton Stiles went 74 yards on the ensuing kickoff to set the final score.

Archer (4-yard run) and Moses (18-yard run) both scored in the first half as well sandwiched between a 7-yard Drew Evens touchdown that gave Port Allegany a 22-0 halftime lead.

Moses ran 16 times for 75 yards, Stoles 10 times for 71 yards, Evens three times for 50 yards, and Archer 10 times for 42 yards for the Gators. Evens was also 9 of 13 passing for 75 yards and an interception with Archer catching seven passes for 65 yards.

Bish was 8 of 11 passing for 82 yards with Brody Dittman going 6 of 13 for 41 yards. Dawson Camper ran 17 times for 47 yards and a touchdown for Union/A-C Valley with Zach Cooper catching seven passes for 63 yards.

EMPORIUM, Pa. – Sylus Pearson and Jameson Britton each scored two touchdowns, and Pearson and Malaki Zucal both went over 100 yards on the ground to lead Cameron County to a 52-0 win over visiting Sheffield.

Maddox Baughman (2 of 3 passing, 44 yards, 6 carries, 44 yards) added a touchdown passing and a touchdown rushing for the Red Raiders (2-4), who have won two straight.

Colby Barr was 5 of 15 passing for 55 yards for Sheffield with Gage Mott-Macalush rushing seven times for 35 yards.

CLARION, Pa. – Posting 33 points in the third quarter, Central Clarion pulled away for a 46-14 rout of visiting Moniteau at Clarion University’s Memorial Stadium.

The Wildcats (7-0) led 13-0 at halftime, then returned the second-half kickoff for a touchdown as Ashton Rex galloped 74 yards to the end zone. It was the first of four third-quarter TDs from Rex, who returned an interception 31 yards for a touchdown 47 seconds after his kick return.

After Jase Ferguson hit Dawson Smail on an 8-yard pass for the Wildcats’ third TD, Ferguson hit Rex for the first of two TD strikes from 32 yards out for Central Clarion’s fourth TD of the quarter in just a span of 2:31 on the clock.

The Wildcats finished off the barrage on Ferguson’s second TD pass to Rex from 16 yards out to put the Wildcats up 46-0 with still 3:30 left in the third.

Rex caught three passes for 93 yards while Ferguson completed 10 of 20 passes for 202 yards and four TDs. He connected with Tommy Smith on a 15-yarder in the first quarter. Braylon Beckwith made it 13-0 with his 1-yard run in the second quarter.

Moniteau (2-5) scored twice in the fourth quarter on runs from Trent Beachem and Hunter Stalker covering 1 and 6 yards. Stalker ran for 117 yards on 24 carries.

Charlie Geci added a 9-yard scoring run for the Crusaders (6-1).

Pentz ran eight times for 57 yards and was 9 of 17 passing for 93 yards while throwing a pair of interceptions.

SMETHPORT, Pa. – Aiden Zimmerman scored a pair of touchdowns to help Ridgway to its second straight win, this time 42-6 at Smethport.

Aiden Zimmerman scored on a 1-yard run and on a 15-yard touchdown pass from Cameron Larkin, who also added a 29-yard score on the ground.

Luke Zimmerman, Kaden Dennis, and Eli Perez also scored on the ground for the Elkers (2-5) with Luke Zimmerman rushing for 107 yards.

JoJo Leet scored the lone touchdown for Smethport on a 9-yard run.

HYDE, Pa. – Behind a pair of third-quarter touchdowns, Tyrone ended Clearfield’s five-game winning streak with a 21-14 road win over the Bison.

Trailing 14-7 at halftime, the Golden Eagles tied the game on a 3-yard Ashton Walker touchdown run early in the second half before a late third-quarter touchdown pass from Walk to Andrew Weaver gave Tyrone its second and final lead of the game.

Walk also threw a 9-yard touchdown pass to Kolten Miller in the first quarter to put the Golden Eagles up 7-0 before Clearfield scored a pair of second-quarter touchdown to take the one-score halftime lead.

Brady Collins caught a 6-yard touchdown pass from Jacob Samsel, who was playing in place of Will Daniels.

Carter Freeland then scored on a 64-yard run.

Walk was 18 of 29 passing for 197 yards and the two scores with Miller catching six passes for 53 yards.

Samsel was 3 of 7 passing for 46 yards while Collins ran 20 times for 74 yards and caught one pass for six yards.

CURWENSVILLE, Pa. – Tanner Kephart ran for four touchdowns and threw for a score to lead Moshannon Valley to a 41-14 road win over Curwensville.

Kephart, playing in the Wildcat, ran for 159 yards while helping the Black Knights get to the Mercy Rule by halftime up 35-0. He also tossed a 20-yard touchdown pass to Micah Beish.

McGarry was 11 of 31 passing for 47 yards with a touchdown pass to Nik Fegert but was also intercepted three times. He added 14 yards rushing.

Oct. 7 D10 Football: Warren’s Morelli Picks up 100th Win as Head Coach; McDowell Hands Meadville First Loss; Knox at it Again for OC
Behind Dominant Defense, Running Game, Farrell Takes Control of Region 3 With Win Over Sharpsville
This website or its third-party tools process personal data.In case of sale of your personal information, you may opt out by using the link Do not sell my personal information.
×
Manage consent