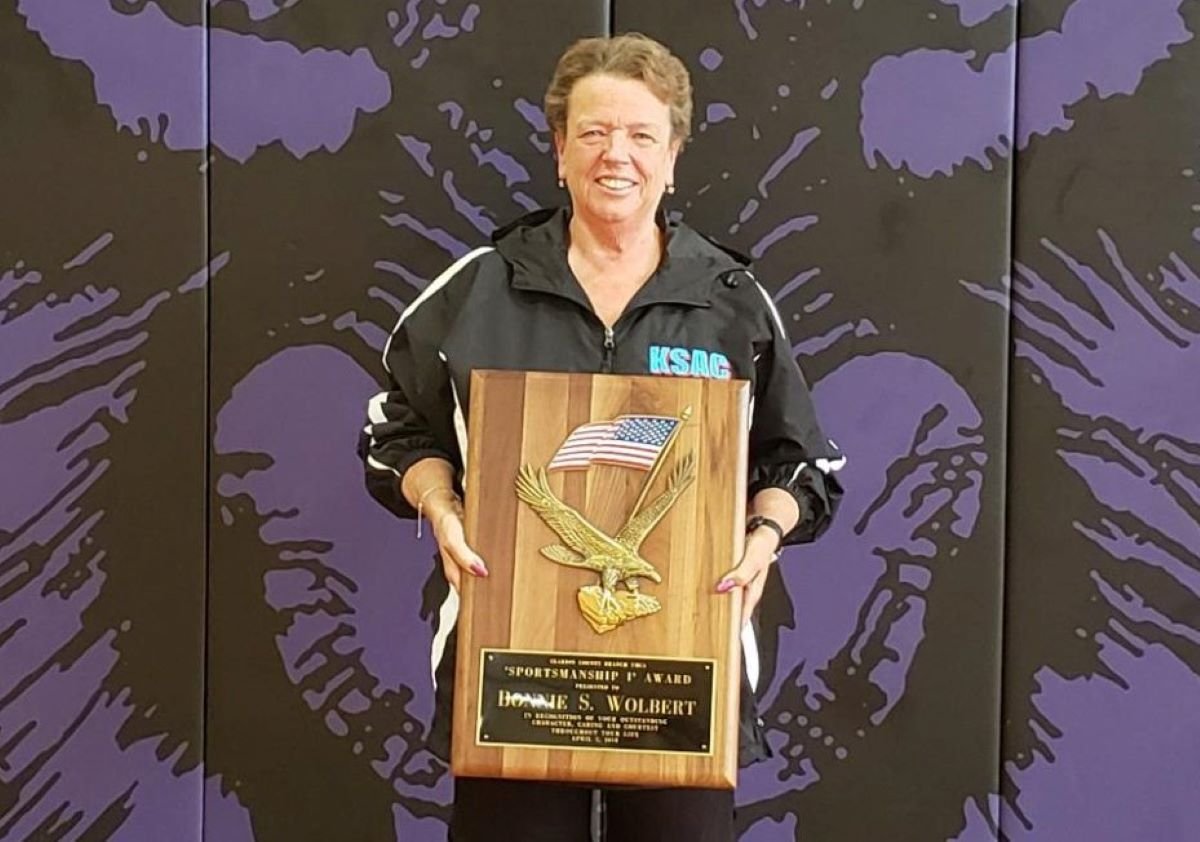 Wolbert was named the Western Pennsylvania Sportsperson of the Year in 2018 by the Clarion County YMCA. Submitted photo

Wolbert is a North Clarion High School and Clarion State College (now Clarion University) alumnus who taught at North Clarion for 34 years and was the cheerleading advisor for 30 years. She has been the athletic director at the school for the past 10 years and is a member of the PIAA District 9 Committee.

Hired at North Clarion as an English teacher in 1977, Wolbert has been a colleague, advisor, and mentor for countless numbers of North Clarion students and teachers.

“Everyone here still looks to Bonnie as a mentor and an advisor for professional or even personal matters,” Baumcratz said. “If you ask her, North Clarion is her heart and her family. She wouldn’t want it any other way. Bonnie has thousands of students that she treated as if they were her own.”

According to Wolbert, it is all the people she has met over the years that keeps her going.

“My friends keep asking me why I keep working,” Wolbert said. “My answer is simple. I have met so many wonderful, inspiring people through my involvement with teaching and with sports. I have made lifelong friends who have shared my excitement and accomplishments and yet have been there for me through challenging times and loss.”

With all of her dedication to North Clarion, it’s hard to pinpoint one thing that Wolbert is known for. But if one was pressed it would have to be her renditions of the National Anthem.

For years, Wolbert has sung the Star Spangled Banner at North Clarion athletic events and even at some District 9 and PIAA contests.

“A question came to me one night after pushing the play button at the start of all the basketball and volleyball games,” Wolbert said. “Why am I having people listen to a recording of the National Anthem? What happens if the tape doesn’t work? Well, I guess I’ll just sing it myself. What happens if the microphone doesn’t work? I’ll have the crowd sing it with me. The rest is history.”

According to Wolbert, singing has always come naturally to her.

“I’ve always loved to sing,” Wolbert said. “It helps when you’re not that athletic. You perform in musicals, sing at weddings, or just sing for fun.

“After graduating college, I belonged to a group called the North Clarion Players who performed every summer at the Verna Leith Sawmill Theatre in Cook Forest. (We performed) “Hello Dolly”, “The Sound of Music”, “Oklahoma”, “Into the Woods”, “A Funny Thing Happened on the Way to the Forum”, “The Music Man”, “Guys and Dolls”, and more. What fun.”

Since moving into her roles as athletics director and District 9 committeeperson, Wolbert has tackled one of the tougher subjects facing high school athletics in rural communities – a lack of students to fill rosters.

“It is getting more and more challenging for schools to host a sport without co-oping with at least one other school,” Wolbert said. “I’m proud to say I have been involved over the past 10 years with setting up co-ops providing North Clarion student-athletes with many opportunities to participate in a variety of sports.”

“Two of our boys have set records swimming for Brookville High School,” Wolbert said. “And my girls have a place to play golf with Keystone if they wish.

“If North Clarion cannot host a sport, I will find a school within the PIAA boundaries who will, hopefully, allow us to co-op with them.”

Wolbert also serves as the statistician for the KSAC and the District 9 Football League and is the main media contact for those leagues with the media when it comes to All-Conference and All-League information.

“I’m going to use a football analogy to describe Bonnie,” recently retired Central Clarion/Clarion football coach Larry Wiser said. “She is the nose guard in a 3-4 defense. She is double-teamed, triple-teamed and she still is the glue that holds the team together. She played a major role to help usher in the football cooperative between North Clarion and Clarion. She has been a coach, official, teacher, athletic director, and in many ways, the biggest cheerleader for her students. I have been very fortunate to have Bonnie as a friend.”

As a member of the District 9 Committee, Wolbert is the chairperson of the Competitive Spirit Committee and helps run the event.

“I have had the pleasure to serve on the District 9 Committee with Bonnie for many years,” District 9 chairman Aaron Straub, the athletic director and boy’s basketball coach at Elk County Catholic said. “Bonnie is an outstanding committee member and represents the female officials in District 9 very well. She is one of the most recognized individuals throughout the District. You may see her running an event at her own school, serving as the game manager at a PIAA District or State event, serving as a PIAA official at a Track & Field Meet, or singing the National Anthem at a sporting event. Regardless of the event or her position at the event, you can bet she is conducting business with a smile and completing the task in a professional manner. When Bonnie is in charge it is done with class, dignity, and respect for all. Sportsmanship, fair play, and honest competition are all very real and dear to Bonnie. She is the Sportsmanship chairperson for District 9 and serves on a state committee for sportsmanship. If you know Bonnie you know how much she values integrity and sportsmanship.”

Wolbert is also the Vice-President of the District 9 Athletic Directors Association and has run the pole vault at the District 9 Track and Field meet for a number of years.

“Bonnie has run many District 9 championship events,” District 9 Treasurer Bob Tonkin, a former District 9 committeeperson who still runs the football and track and field championships for the District, said. “The events she runs are always well organized and run. Bonnie has always put student-athletes at the top of her priorities followed by North Clarion, the KSAC, District 9, and the PIAA. And, I am not sure of the order of importance.”

A PIAA certified track and field official since 1983, Wolbert has judged the pole vault at the PIAA Championships every year a championship has been held since 1983 and is currently the head pole vault judge. She was a recipient of the Most Outstanding Female Track and Field Official award and has been the District 9 Female Official’s Representative since 2011.

“I think that collectively, we (the PIAA) have the utmost respect for Bonnie,” PIAA Chief Operating Officer Mark Byers, who runs the track and field championships among others for the PIAA, said. “She is a leader in every aspect and every position that she chooses to occupy. My initial reaction is probably the best. When you mention her name, I just blurt it out. She’s the best. I think everybody probably mirrors the same thing. She’s a special woman.”

In an age when athletic directors face so many questions from coaches to parents to administrators and media members, Wolbert is always willing to listen and answer.

“Without a doubt, Bonnie is one of the most dedicated athletic directors I’ve had the pleasure of dealing with during my 30-plus years at The Derrick and The News-Herald,” long-time Oil City Derrick Sports Editor Ed Brannon said. “She seems to always be on the job, whether it’s in her office long after school hours, at the field, or in a gymnasium. And her rendition of the National Anthem is simply worth the price of admission.”

“Having been around local sports for over 30 years, I could not imagine a sports season without Bonnie Wolbert,” Kalinowski said. “Bonnie is like the ‘mom’ of the KSAC. From her beautiful singing of the National Anthem to her neverending service to the student-athletes of North Clarion, the KSAC, and District 9, Bonnie always goes above and beyond in her duties as an athletic director or a game manager.”

“I have known Bonnie Wolbert for over 20 years,” Rossetti, who also was the Sports Editor at the Clarion News and was a part-owner in D9Sports.com until starting D9and10Sports.com, said. “She is one of the nicest persons you will ever meet. She is hardworking and dedicated and most importantly she is all about the kids. Sometimes we all lose focus on what this is truly about, the kids, but Bonnie rarely does. She also loves North Clarion. She is Ms. North Clarion. I joke with her that she should be buried under the pitcher’s mound someday (but not anytime soon). But really would anything be more fitting? Her life has been dedicated to that school for longer than anyone can remember. And her singing the National Anthem. She is our local version of Jeff Jimerson (the long-time, frequent Pittsburgh Penguins Anthem singer). I could go on and on. She is truly a special person, a special lady, and I am honored to call her a friend.”

A H(e)ART for Baseball: Joe Hart’s Long, Winding Road to South Bend
A H(e)ART for Baseball: Joe Hart is a Cameron County Boy at Heart
We use cookies on our website to give you the most relevant experience by remembering your preferences and repeat visits. By clicking “Accept All”, you consent to the use of ALL the cookies. However, you may visit "Cookie Settings" to provide a controlled consent.
Cookie SettingsAccept All
Manage consent