A H(e)ART for Baseball: Joe Hart is a Cameron County Boy at Heart 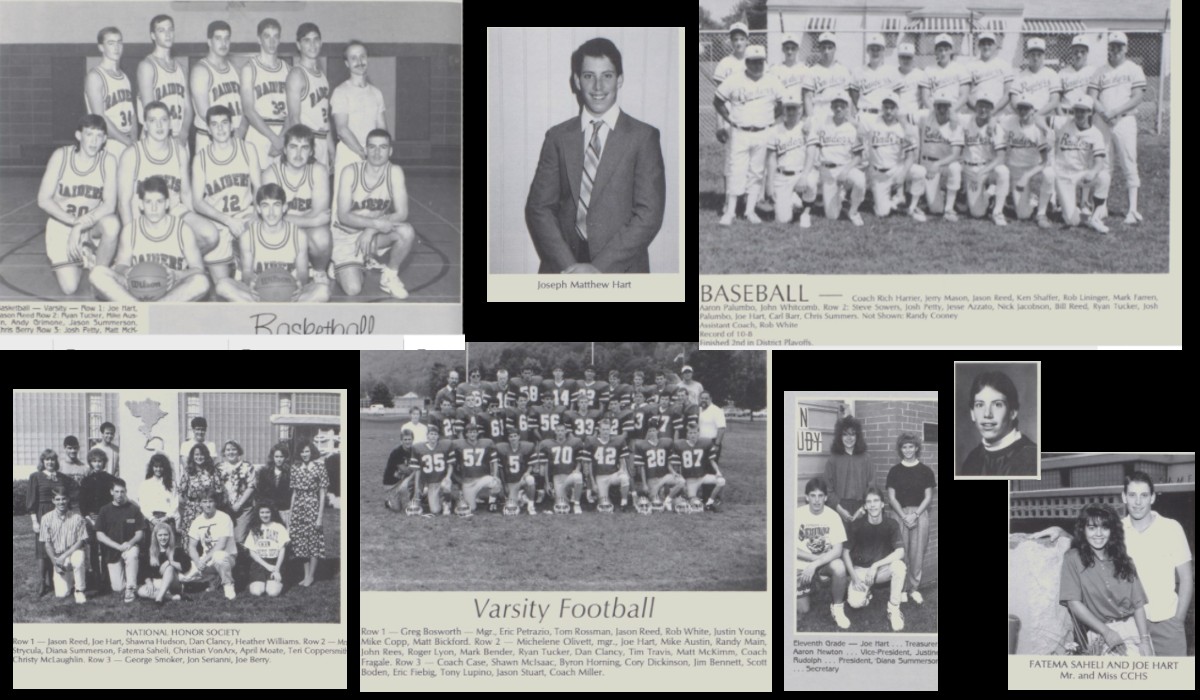 A montage of photos from Joe Hart's high school days at Cameron County. Photos are from the 1991 and 1992 Cameron County yearbooks.

D9and10Sports.com had a chance to sit down with South Bend Cubs President Joe Hart, a 1992 Cameron County graduate last week and talk to him about his experience. The end result is a three-part series on what Hart is doing now, how he got there, and what growing up in Emporium in the 1980s was like. This is Part Three of the series detailing Hart’s memories of growing up in Cameron County

SOUTH BEND, Ind. – Joe Hart may have come a long way since his days in Emporium, Cameron County, Pa., but there is still something about his hometown that never leaves him.

“You walk into town and it kind of feels like it is still set from the day that I left,” Hart said. “It is a very small town, but there is this sense of relaxation when you cross into Cameron County. I know at least for a couple of days I am there the world slows down. Sometimes, I think about how nice that different lifestyle is. It’s just much calmer and slower versus here where your phone is ringing all the time and there are emails nonstop and text messages. I loved my time there, and I love going back to visit.”

One thing that hasn’t changed in Hart’s life from growing up in Emporium in the 1980s to being president of the South Bend Cubs of the Class High A League is he spent his days around a ballfield.

“My brother and I just grew up at the ball fields,” Hart said. “Whether we had games or practices, we were there all the time. We were constantly playing on one of the fields there. That was back in the day when during the summertime you would get up and you would all meet at the baseball field and play baseball all day. When it got dark, that’s when you went you went home. And when it rained you played on the television or the Atari or whatever it was. You couldn’t get online. Those are the fondest memories I have. Just going and hanging out at the ballpark. Emporium was great for that. It’s a small town. You could walk to wherever you needed to go. It’s not like here.”

Joe Hart (far left kneeling) played baseball with a lot of the older guys when he was growing up. This picture is circa 1993. Photo courtesy of Ralph McKimm Jr.

Like most kids from a small town, Hart played multiple sports when he got to high school.

“I played football, basketball, and baseball,” Hart said. “I love that. I just went from sport to sport. I played Ally-Cat baseball with the older guts in the summertime. I played Legion Ball. It was a great time.”

Hart wasn’t the biggest kid but he was a good player, according to his high school basketball coach Mark Guido.

“I coached him my second year as head coach at Cameron County,” Guido said. “He had average height, but he played inside and was highly effective.”

So effective that Hart was named honorable mention North Tier League his senior season and was the MVP of the North Clarion Christmas Tournament.

Joe Hart scoring a basket during his senior year of high school. Photo from the 1992 Cameron County Yearbook

Hart’s best sport was baseball, but the sport he misses playing the most is football.

“Baseball, by far,” Hart, who helped the Red Raiders to a second-place finish in District 9 Class 2A, said. “It’s funny, baseball, by far was my best sport and my favorite sport, but the sport I miss playing the most is football. There’s something about running out on that field on a Friday night.”

One of the great memories from the football field for Hart actually occurred in a junior varsity game his sophomore season in 1989.

“We could never get past Smethport,” Hart recalled remembering the Hubbers were one of the most dominant teams in Pennsylvania at the time. “Now we did beat them my 10th-grade year. I was playing junior varsity. I was our quarterback, and we beat them, 13-12. So, I’m hanging my hat on that.”

Hart was quick to point to a couple of people as having big influences on him growing up.

“Randy Cooney was our assistant baseball coach,” Hart said. “He was drafted by the Pirates (second round in 1977). Another good friend, Mark Corey, from Austin, I still stay in touch with him.”

“I’d always followed his career,” Hart said. “We played against each other in high school in basketball baseball. And here he is the closer in Nashville. I think he’s still the all-time saves leader for the Nashville Sound or at least he was.”

Another person to have a great influence on Hart growing up was Larry Boring.

“He was our PE teacher and athletic director at the time when I was there,” Hart said. “I think another one would have been Neil McIsaac, our Legion baseball coach. He was very influential. Another one would be Glenn Fettig, who used to run the Little League there. My dad (Bob) used to be president for years and then vice-president. Dick Harrier was my baseball coach. He just passed away not too long ago (April 21, 2021). He was an amazing guy. I loved playing for Dick.”

A man just a few years older than Hart who became one of his best friends is Ralph McKimm Jr.

“Ralph is a good friend of mine,” Hart said. “He is a couple of years older than me. I hung out and played baseball with them. I played baseball a lot with the older guys when I was growing up.”

Having the chance to play baseball with McKimm led to a lifelong friendship between the two.

“Joe was the best man in my wedding,” McKimm said. “He is my daughter Alyvia’s godfather.”

After the Chicago Cubs won the World Series in 2016, Hart got a World Series ring since South Bend is one of the Cubs’ affiliates. He brought the ring home to Emporium and allowed some of his friends to try it on, including McKimm.

“His daughter, Mallory, just graduated from Cameron County this year,” Hart said. “I am going back to her graduation party.”

Hart said the biggest advice he can give someone coming out of a small town who wants to do what he is doing is get involved.

“Be active,” Hart said. “When I went to West Virginia (University), it probably wasn’t until the end of my sophomore year that my advisor kind of kicked me in the ass and said hey you need to get involved with something. I mean, I was the kid that went to class, did well and all that stuff, but he said I needed to get involved, spread my wings, learn more about it. I joined the Sports Management Club. We ran the concessions for Mountaineer baseball games. That gave me another little opportunity, another little piece of what the business side of the sport could be. That made a big difference. It got me out there. When you are in Emporium, there are 1,800, 1,900 total people. My graduating class was like 70. Then you got to a university that has 25,000 people. It is a little overwhelming. But it forced me out of my comfort zone. I was the kid that hated to stand up in class and speak, and I’d sit at the top. But as I went along, you just get out of your comfort zone and push yourself. Now, I love doing speaking. You know, I do all that stuff and it’s not an issue at all.”

Hart is also proud of his hometown and what he and others have done to represent it.

“When I look at what Nate Sestina (the 2015 Cameron County graduate who played basketball at Bucknell and Kentucky and played a few games in the G-League this season with the Nets organization before playing overseas), it’s awesome without a doubt,” Hart said. “Nate was several years behind me. When I was in school his dad was the coach at Oswayo Valley – that was one of my best games in high school I scored 29 points (Hart said laughing). But (what Nate did) still brings great pride.”

Nate Sestina said Hart is the one people look up to.

“He paved the way,” Sestina said.

Ms. North Clarion – Bonnie Wolbert
OLYMPICS: Jburg’s Shuey Throws Over 85 Meters in Olympic Tune-up; Punxsy Grad’s Wife Asst. Women’s Soccer Coach
This website or its third-party tools process personal data.In case of sale of your personal information, you may opt out by using the link Do not sell my personal information.
×
Manage consent