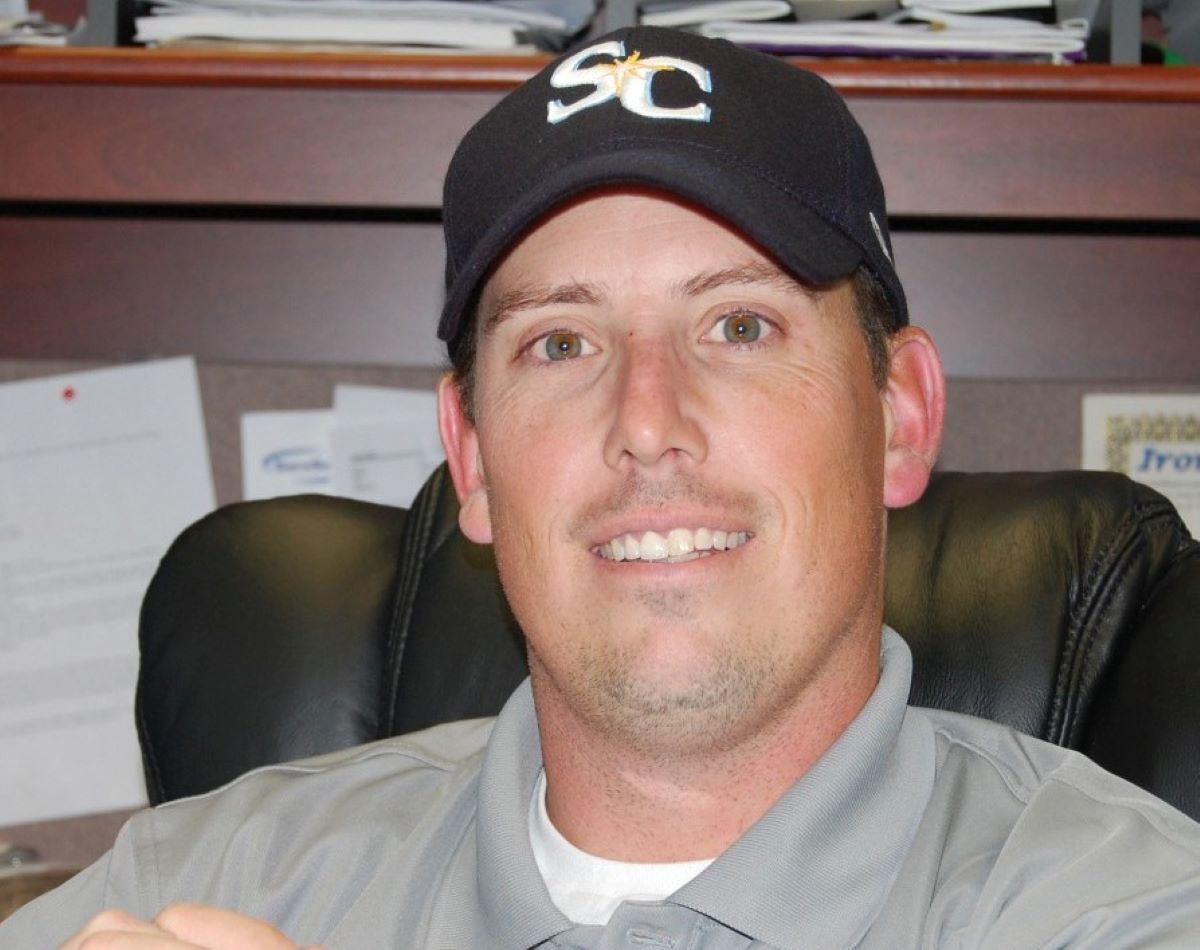 Joe Hart in his days as the General Manager of the Charlotte Stone Crabs. Courtesy Photo.

D9and10Sports.com had a chance to sit down with South Bend Cubs President Joe Hart, a 1992 Cameron County graduate last week and talk to him about his experience. The end result is a three-part series on what Hart is doing now, how he got there, and what growing up in Emporium in the 1980s was like. This is Part Two of the series detailing how Hart got to where he is today

SOUTH BEND, Ind. – A journey well worth it.

That is what Joe Hart thought as he looked over the field at Four Winds Field last week, the home of the South Bend Cubs where he is president of the High A Central Division team.

Hart’s journey in the sports business started at West Virginia University where he ended up in a major probably different than the one he should have been in.

While the 1992 Cameron County graduate knew he wanted a career in sports, he thought that career was going to be at the high school level.

“I knew for me it was sports right from the beginning,” Hart said. “I think my initial thought was when I went to college, I wanted to be the PE teacher and an athletic director. That was what my original plan was or at least what I thought I was doing.”

After his freshman year of college at West Virginia University, where he was a Sports Management major, Hart met with his advisor.

“I told him I didn’t feel like I was doing anything that had to do with teaching,” Hart said. “He said ‘Well, your not. You’re in the wrong major.’ I was like, well I like what I’m doing.

Hart made a trip back to his alma mater in 2018 to catch a basketball game. Photo courtesy of Joe Hart

Hart stayed with the Sports Management major and that led to an internship between his junior and senior years with the Buffalo Bisons.

“I just absolutely loved it,” Hart said. “I knew exactly what I wanted to do. I wanted to be in baseball.”

In Buffalo, Hart’s internship was in community relations.

“I went around to the inner-city parks in town and just did baseball clinics,” Hart said. “I absolutely loved it. But, for me, that was just nine to five. I didn’t have any game-day responsibilities. But I was living in Buffalo for the summer, so I went to my boss, the head of community relations, and said can I help on game days whether it’s concessions or whatever. I just want to learn as much as possible.”

Hart said that summer in Buffalo gave him the ability to know what the industry was about and learning different areas just helped him find other opportunities.

“I wouldn’t trade the Buffalo experience for anything,” Hart said. “Buffalo was great because it was a very well-known franchise at that point in time. They were the best in minor league baseball. The Rich family had a great thing going there, and that helped open doors because I had that on my resume.”

ON TO CAMERON COUNTY, TEXAS, NOT PENNSYLVANIA

Harlingen, Texas is a city of about 65,000 people located, in of all things, Cameron County, Texas.

In Harlingen resided a team in the independent Texas-Louisiana League, the Rio Grande Valley WhiteWings.

So the boy from Emporium was going to get an education deep in the heart of Texas.

And an education it was.

Harlingen is located along the Gulf of Mexico about two hours south of Corpus Christi, Texas, and just about 29 miles from the Mexican border.

“As a guy from Emporium, Pennsylvania, you start driving and you hit Houston and you’re like, well I have to be close,” Hart recalled. “I was still six-and-half hours away. Like I just think I’m going to drive right into the ocean. It was definitely a culture shock.”

“I did an internship there, I was the box office manager,” Hart said. “I then got hired on full time as the assistant GM of Operations and oversaw food and beverage and all that. It was a great experience. It was a full-time staff of three, and we had like four interns. You were forced to learn many things. Greatest experience ever.”

A SHORT TRIP TO MUSIC CITY BEFORE CALIFORNIA HERE I COME

Thanks to his experiences in Harlingen, Hart found himself going from independent ball to Class Triple-A in Nashville with the Nashville Sound.

“I did group sales,” Hart said. “This was at the old stadium, Greer Stadium. I did one year in Nashville, and the old vice-president of the Texas-Louisiana League became the general manager of the Fresno Grizzlies (another Triple-A team in California). We worked together when I was in Harlingen. He called me and said he was looking for a food and beverage director. He said ‘I want to run it the way we ran the stuff in the Texas-Louisiana League. You know how to do it. Would you be interested in coming?’ So, I left Nashville after that year and went out to Fresno for three years (1999-2001). My first year there, I was the director of food and beverage and I did corporate sales. After that, they got rid of our general manager and made me general manager my second and third years there.”

BACK TO MUSIC CITY AND ON TO SUNNY (AND RAINY) FLORIDA

“I was in Nashville seven years the second time,” Hart said. “I went back as the Corporate Sales Manager. I then did assistant GM of Operations, and I finished up there as General Manager.”

It was in Nashville the second time around that he met his wife, Tracy.

Hart had been married once before and has a son, Robbie, now 20, from that marriage. But his first wife wasn’t a big fan of the baseball life.

Tracy, with who Hart has two more kids, Calvin (13) and Caroline (11), has been much more understanding.

“We’ve been together 15 years,” Hart said. “We started dating when I was working in baseball. So she knew (what it was like). She is absolutely awesome. She is a saint, for sure.”

Hart (center) with his wife (Tracy) and kids, Robbie (far left), Calvin (on his lap), and Caroline (on Tracy’s lap) during Hart’s stint with the Charlotte Stone Crabs circa 2009 through 2011. Photo courtesy of Joe Hart

Hart found out just what kind of a saint Tracy is (more on that soon) when Ripken Baseball, headed by Hall of Famer Cal Ripken and his brother Bill, another former MLB player, came calling.

“I got contacted by Ripken Baseball, which took me to Port Charlotte, Fla., for the startup of the Charlotte Stone Crabs,” Hart said. “That was a team Cal Ripken bought that was in Vero Beach (Fla.).”

Port Charlotte is along the Floria Gulf Coast and is about 30 miles north of Fort Myers, Fla., and about an hour south of Bradenton, Fla.

“I was there for the startup of the Stone Crabs,” Hart said. “The opportunity to launch a franchise from the ground up was a phenomenal opportunity, and growing up as a kid, Cal Ripken was my hero. Having a chance to work for him and his organization (Ripken Baseball) for three-and-half years was pretty cool.”

Joe Hart on the Field while general manager of the Charlotte Stone Crabs. Photo courtesy of Joe Hart

Back to Tracy and her sainthood.

“I took the job to go work for Ripken four days after Calvin was born,” Hart said. “I spent the first six weeks there by myself going back and forth. Then, when she came down, the next thing you know, she is pregnant with Caroline. In the summertime, I am gone, and here you are with two newborns. She is a saint for sure.”

Joe and Tracy Hart at Wrigley Field circa 2015. Photo courtesy of Joe Hart

COMING TO THE CITY BETTER KNOWN FOR FOOTBALL THAN BASEBALL

After spending the 2009, 2010, and 2011 seasons in Florida, Hart found himself on the way to a city in Indiana that is more known for its college football team than its baseball franchise.

“I had kind of done the launching of the team in Port Charlotte, and we were doing well at the time,” Hart said. “Here, this franchise had been struggling mightily. It was an opportunity for me to get a promotion.”

A recommendation from another owner in the then Midwest League to new South Bend Silver Hawks (South Bend was an Arizona Diamondbacks’ affiliate at the time) Andrew Berlin, who bought the team in November 2011 from former Indiana Governor Joe Kernan (the sale was made at 11:11 a.m. on Nov. 11 for a straight row of 11s – 11/11/11 at 11:11), led Hart to South Bend.

“They were looking for a team president,” Hart said. “I was recommended to (Berlin) by one of the other owners of the (Midwest) League that I knew. I ended up getting the job, and have been here ever since.”

Hart’s journey has led to some awards over the years.

In addition, the South Bend Cubs were selected by Minor League Baseball as the 2015 John H. Johnson President’s Award for MILB (franchise of the year) and Ballpark Digest named the South Bend Cubs its 2015 Team of the Year. The Cubs also won the final Midwest League championship in 2019.

Joe Hart (center) with the Midwest League trophy after South Bend won the title in 2019. Photo courtesy of Joe Hart.

Editor’s Note
Part Three: Growing up in Cameron County was a Special Time will publish July 16

Clearfield Graduate Mikesell Named Women’s PSAC Pete Nevins Scholar-Athlete of the Year
Ms. North Clarion – Bonnie Wolbert
We use cookies on our website to give you the most relevant experience by remembering your preferences and repeat visits. By clicking “Accept All”, you consent to the use of ALL the cookies. However, you may visit "Cookie Settings" to provide a controlled consent.
Cookie SettingsAccept All
Manage consent