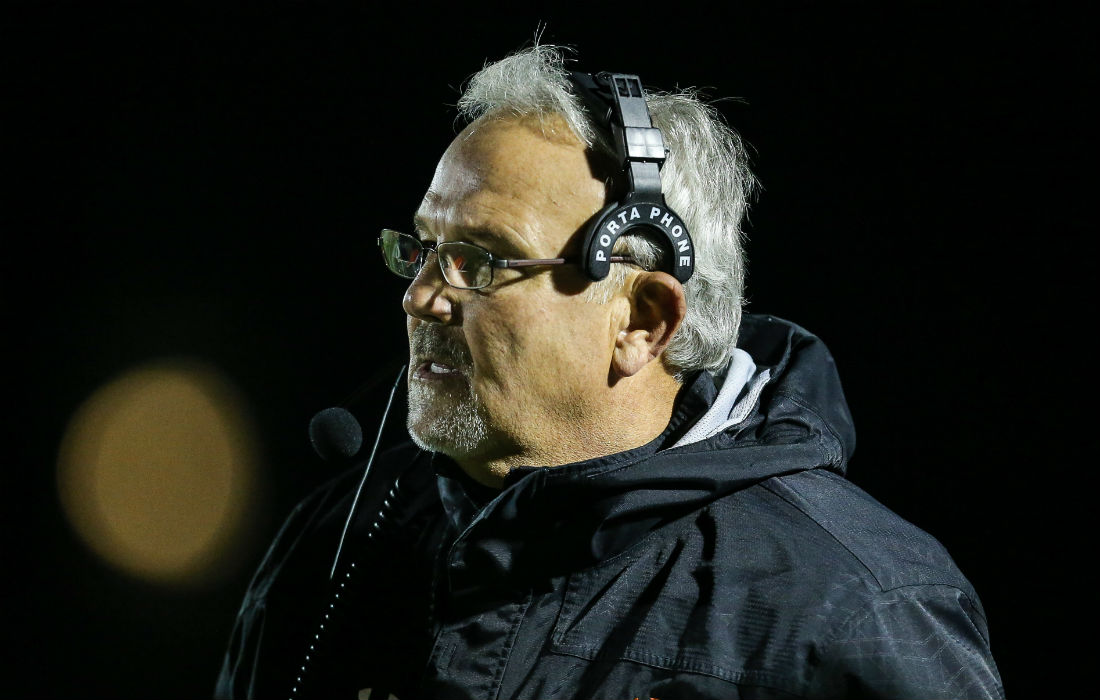 “I just sense this is the right time to do it,” Wiser said. “I wanted it ti happen right after our banquet (which was supposed to be Sunday, Nov. 22, but was canceled because of COVID-19), because I wanted the banquet to be about the kids. I really wanted to just sneak out this time.”

By this time, Wiser was referring to the fact that he had retired once before – after the 2009 season – before coming back in 2011 after Judd Allen, who replaced Wiser for the 2010 season, had to step away.

But while the first retirement was about health issues – Wiser’s knee was so bad that he had to receive a shot just to coach in the 2009 District 9 title game – this time it’s more on his terms.

“Every year when we get to the end of the season, I evaluate where I am at,” Wiser said. “I really wasn’t sure I was coming back after last year. Then the whole COVID thing came down this year, and we weren’t sure if we were going to have a season. I am hoping I am making the right decision. It’s a combination of things. It (coaching) is a long haul with a lot of stuff in the offseason. I don’t think you will see me come back as a head coach this time.”

In a career that spanned six presidents and nine presidential elections, the former social studies teacher at Clarion High School, finished his career as the second-winningest coach in District 9 history with a mark of 238-103-1 (70.1 percent) – only Clearfield’s Tim Janocko has won more games in D9. He led the Bobcats to four District 9 titles (three in 1A – 1997, 2009, 2013 – and one in 2A – 2017) and eight runner-up finishes.

But it’s not the wins or the titles that Wiser remembers.

“One of the things I really truly enjoyed was getting kids to believe in themselves,” Wiser said. “When I played high school football, my coach opened a door for me and I was able to see that I could do more than I thought I could do. I truly hope we have done some of that over the years for our kids. Teaching them that the person you think you are, you can be so much more. I have seen kids get a lot better as athletes, as players, as people during their time playing for us. Those things are satisfying, to see the personal growth. I don’t take credit for it. We try to put them into situations where they can thrive and then let them thrive.”

In a twist of the football gods, Wiser’s first and last game as head coach came against the same opponent, Karns City.

“That first game I ever coached as a head coach against Karns City, still sticks out,” Wiser said. “They were coming back with a team that had gone to the Little 12 Championship game. They were a senior-laden team. The team I had had Craig Girvan and maybe one other starter on offense coming back. I still remember watching them scrimmage, and they looked uncharacteristically out of shape. I said we were going to be in better shape than them. Mike Taylor was the quarterback of our team. I will never, ever forget him. He was such a great kid. He soaked everything up like a sponge.”

Wiser, who started coaching as an assistant in 1973, has seen football evolve not just around him but within how he has coached as well.

“I go back and remember one of the first great defenses I had. John Marshall, the local attorney, was on that team, as was Danny Estadt, the Jack boys, Eric Porter. Back then, we had linebackers play one position on the football team. I became much more of a gambler defensively over the years.”

Wiser said when he started coaching as the defensive coordinator, he would script out the other team’s plays.

“In the 80s, I don’t know if people were tearing film like we were,” Wiser said. “Now with Hudl, everyone can tell you what we ran from the 10-yard line. I use to write down every play by hand then put it on the chalkboard then the whiteboard what the other team’s favorite plays were, that type of thing. I probably knew their offense as good as their offense coordinator did. The last seven or eight years with Hudl, it does a lot of that stuff for you. I am not sure that is good or bad.”

“Without a doubt, the co-op has been great,” Wiser said. “We had 70 kids out for junior high this year with the potential for 80 next year. It has been a long time since that has happened. We had a solid 40, 41 on the varsity football team this year, and I would like to see that grow. It is getting us on some really solid football. We don’t have to play kids too early, and we were able to have a true JV team. The JV team was great this year. Not many people were able to watch it, but they went 6-0 this year. We can’t go back to the days where we were rolling the dice with five or six in the senior class and hoping to make it work.”

Wiser said one of the things he is going to miss the most about not coaching are the practices.

“I will miss being on the football field, the practices,” Wiser said. “I really enjoy working with the kids in practice. It’s not just skills-wiser but working with their psyche, getting them to believe me, getting these kids to step out of the box and do things they normally didn’t think they could do. That is the fun part, making them feel better about themselves and more comfortable about themselves.”

While Wiser isn’t plotting any sort of comeback into coaching, he could see himself perhaps stepping back into a smaller role at some point in time.

“Right now, no, I don’t have plans to get back into coaching,” Wiser said. “But, I am not going to preclude that. I don’t know if I could work with anybody but Clarion. Maybe I could do junior high or something. Something where I don’t have to be there for the weight room, the fundraiser, etc. Those two-hour practices go by like 15 minutes for me. I love organizing practices, working with the kids, interacting with the kids.”

Wiser isn’t going to put forth any ideas about who should replace him, but he does believe he has a staff full of great candidates including a pair of former head coaches in Davey Eggleton (Clarion-Limestone) and Dave Louder (Union and Union/A-C Valley) as well as Lee Weber, who nearly took over for Wiser in 2009, and Cam Kirkland, younger coach and a former Bobcat player, who Wiser believes will be a head coach one day.

“I have a great staff,” Wiser said. “They deserve a shot at being head coach.”

The coaches Wiser has worked with over the years is something he doesn’t take for granted.

“Alex Arth, George White, Ray Austin, John Reish, Ray trusted me to be his defensive coordinator,” Wiser said. “I have had a wide array of assistant coaches who have done great things for the kids. It has been a lot of fun working with those guys.”

McDowell Falls to Pribula, Central York in Class 6A Semifinals
Unsung Heroes: Wilmington’s Offensive Line Paves The Way For Vaunted Rushing Attack
We use cookies on our website to give you the most relevant experience by remembering your preferences and repeat visits. By clicking “Accept All”, you consent to the use of ALL the cookies. However, you may visit "Cookie Settings" to provide a controlled consent.
Cookie SettingsAccept All
Manage consent