Late Touchdown Lifts Pine-Richland Past Prep in 5A Quarters; Allentown Central Catholic Topples Meadville in 4A 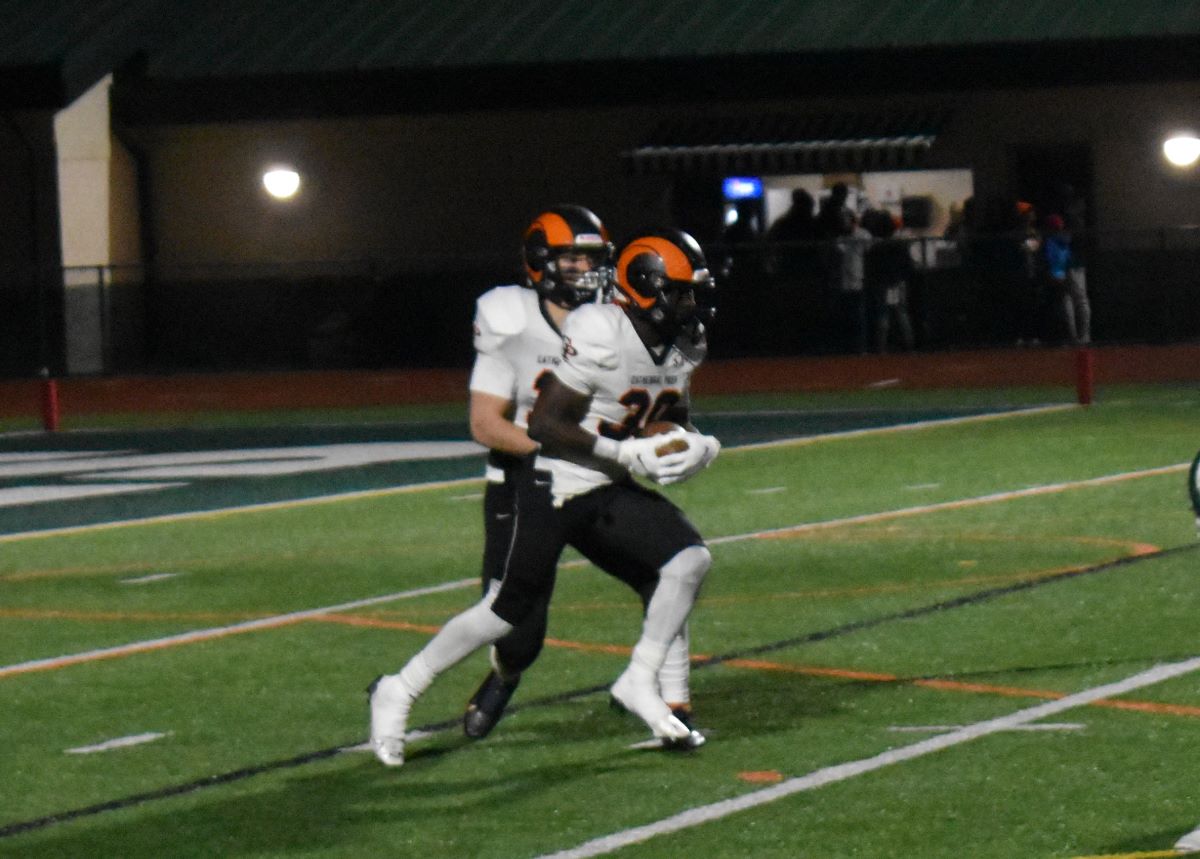 GIBSONIA, Pa. – Ryan Palmieri’s 8-yard touchdown run with 2:01 remaining in the fourth quarter lifted Pine-Richland to a thrilling 21-14 comeback win over Cathedral Prep in the PIAA Class 5A quarterfinals.

Prep, which went nearly a month between games due to opt-outs, jumped on the WPIAL champion Rams 14-0 in the first half, only to watch P-R come storming back.

“I’m extremely proud,” said Prep first-year head coach Mike Krahe. “It was definitely a tough situation having a month off, but I told them it wasn’t an excuse. It’s just one of those things where we got some positives out of it. We just didn’t feel like we executed on both sides of the ball as we hoped to. But again, when you play a good football team, they force those things to happen sometimes.”

The two teams were tied at 14-all in the fourth quarter when DeMario Crawford intercepted Palmieri and returned it to the Pine-Richland (11-3) 31-yard line. A tackle for loss and a penalty backed the Ramblers up to the 39, where they faced a fourth-and-18.

“It was one of those things where we had field position, and we had a little bit of time off so we practiced those things,” Krahe said. “As a coach, you can always second guess yourself. Yeah, we gave them field position, but I thought it was an opportunity to maybe catch them sleeping and get a first down or even a touchdown out of it.”

The result was Palmieri and Ethan Piller leading the 5-plus minute drive on the ground, with Palmieri putting the finishing touches on the drive.

Prep got the ball back and pushed the ball to midfield on Luke Costello’s 18-yard completion to R.J. Roberts, but on the next play, Bryce O’Brien intercepted Costello, who was looking for Cam Bridges down the sideline. With Prep out of timeouts, P-R was able to kneel on the ball to close out the game.

It was the Dejoure Hollingsworth show in the first half for the Ramblers, as they raced out to the 14-0 advantage.

The Ramblers marched down the field on their opening drive, with Hollinsworth punching it in from five yards out to make it 7-0 at the 8:51 mark of the first quarter.

A Palmieri to Brad Gelly 54-yard pass on the ensuing Rams possession set them up with a first-and-goal to go.

The Rambler defense, stiffened, however, as, after a run down to the 1-yard line, they stuffed Palmieri on fourth-and-goal.

“Our kids, we always talk about it, if you give us a blade of grass we’re going to defend it,” Krahe said. “Our kids battled like crazy.”

Hollingsworth went the big-play route for his second score, a 66-yard scamper that saw him break a tackle down the sideline, giving Prep a 14-0 lead with 10:52 to go in the second quarter.

Down by two scores, Pine-Richland’s offense went to work, with Palmieri tossing a pair of touchdown passes less than four minutes apart, a 6-yard strike to Gelly with 4:24 to go in the second quarter to get them on the board, and an 8-yarder to Luke Rudolph that tied the game.

“We just needed to make one more play,” Krahe said. “I think they (Pine-Richland) were thinking the same thing and were able to make that play. Hats off to them, they’re a great team.”

The only scoring opportunity in the second half for either team before Palmieri’s rushing touchdown was a 38-yard field goal attempt by Prep’s Cole Constable that was no good.

The Rams outgained the Ramblers 329-204. Palmieri went 8-of-12 through the air for 139 yards, two touchdowns, and one interception, while also rushing for 88 yards on 24 carries. Pillar had 20 carries for 102 yards and Gelly had five receptions for 77 yards.

For Prep, Hollingsworth finished with 139 yards on 14 carries, while Costello was 7-of-17 through the air for 85 yards. Crawford also had a pair of receptions for 35 yards.

With the win, Pine-Richland will face Cocalico, a 34-14 winner over Exeter Township, in the semifinals next week.

Krahe praised his senior class for persevering during their high school careers, as well as buying into a new head coach.

“They are an unbelievably talented bunch,” Krahe said. “There’s 13 of them and with COVID and all the different things that have gone on, they just rolled with the punches. I can’t thank them enough. It would be very easy for them to see a first-year head coach after following a guy like coach (Mike) Mischler and all the things he accomplished and say ‘who is this guy?’ But they bought into the program and what we were doing.”

It was actually Meadville (12-2) that struck first on a Gavin Longstreth 14-yard touchdown pass to Khalon Simmons in the first quarter, but after that, it was 50 unanswered points from the Vikings.

Shaffer scored three of his four touchdowns in the first half, a 1-yard plunge in the first quarter, and scoring scampers of 20 and 30 yards in the second quarter.

Tamlin Ferguson also connected with Jareel Calhoun on a 50-yard touchdown pass in the second quarter.

It was more of the same in the second half, as Shaffer’s fourth touchdown, a 2-yard run in the third quarter, made it 35-7.

Ferguson and Nathan Schultz scored on touchdown runs in the fourth quarter, with the Vikings (9-5) also adding a late safety.

Ferguson finished with 192 yards through the air for the Vikings.

For Meadville, Simmons finished his brilliant high school career with 92 yards on the ground, while Brady Walker added 52.

Allentown Central Catholic advances to play Aliquippa, a 34-7 winner over Central Valley, in the semifinals next week.

Pizza Hut District 9 and District 10 Football Scoreboard – Week 14 2022 (Nov. 25-26)
Hoenstine too Much for Grove City, as Central-Martinsburg Ends Eagles’ Season
This website or its third-party tools process personal data.In case of sale of your personal information, you may opt out by using the link Do not sell my personal information.
×
Manage consent