Hoenstine too Much for Grove City, as Central-Martinsburg Ends Eagles’ Season 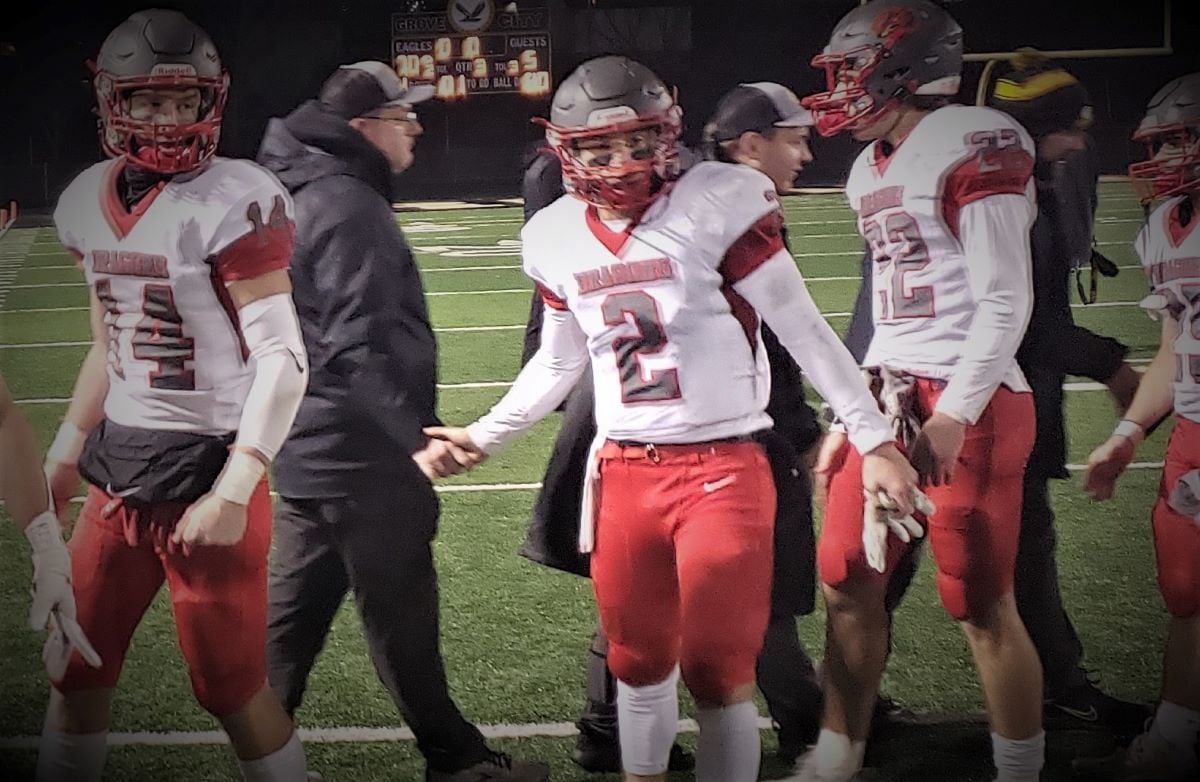 Jeff Hoenstine had over 300 yards of total offense for Central-Martinsburg Friday night. Photo by Chris Rossetti

GROVE CITY, Pa. – Too much Hoenstine and not enough finishing led to Grove City’s season coming to a close with a 35-7 loss to visiting Central-Martinsburg in the PIAA Class 3A quarterfinals Friday night at Forker Field.

“They present a lot of challenges,” Grove City head coach Sam Mowery said. “(Hoenstine) does a great job of getting the ball out. Then, if nothing is there, he makes the plays with his legs and is able to extend plays. He’s a great quarterback. He definitely makes it tough to defend.”

While Hoenstine and Lingenfelter were craving up the Grove City defense, the Eagles’ offense watched a pair of drives end inside the 10-yard line in the first half.

Grove City had first-and-goal at the 7 on its first drive of the game only to have a low snap and two incompletions help derail the drive at the 5.

The Dragons answered with an 11-play, 95-yard drive to take a 7-0 lead on a 7-yard Hoenstine to Hunter Smith TD pass.

Then, down 14-0 late in the first half after a 4-yard Kade Rhule TD run for Central, the Eagles had first-and-10 at the Central 12-yard line.

But three incomplete passes were followed by a scramble run by Hunter Hohman that came up a yard short at the 3-yard line.

“We had a few opportunities deep in their territory,” Mowrey said. “Those are plays that if we make those and convert those into touchdowns, it could be a different ball game. But, hats off to their defense. They made some great plays and were able to get those stops.”

Despite the two failures inside the 10-yard line, Mowrey believed his team was in good shape going into halftime down by just 14 and getting the ball to start the second half.

“Going to halftime 14-0, we felt like we were in a good spot,” Mowrey said. “We had some good things going. We felt if we could go down and get a good drive to start the third quarter then it could be a different ball game. But, that didn’t happen.”

Grove City was able to drive the Central 40-yard line on the opening possession of the half but saw the drive stall on a fourth-and-4 incomplete pass by Hohman.

Central then started to put the game away on the ensuing drive needing just five plays to go 60 yards with Hoenstine hitting Lingenfelter from 20 yards out to make it 21-0.

Grove City again moved the ball into Central territory on its next drive getting to the Dragons’ 25-yard line only to be turned away at the 27 on downs again.

Central put the game completely away then in the fourth quarter scoring twice in a span of just under four minutes with Lingenfelter catching TD passes of 20 and 24 yards, the second of which came after Hoenstine intercepted Hohman at the Grove City 42-yard line.

Grove City’s lone score came with 1:43 to play when Hohman found Nathan Greer along the far sideline, and Greer outran the Central second-string defense 53 yards for a score.

Hohman finished 19 of 31 for 190 yards, a touchdown, and two interceptions with Greer catching eight passes for 130 yards. Gavin Lutz added seven grabs for 45 yards for the Eagles.

“At the end of the day, we are just so proud of our boys and how they battled tonight for four quarters,” Mowrey said. “The ball just didn’t quite bounce our way, but they kept on working and had a great attitude. They have a whole lot to be proud of. That’s for sure.”

Central will take on WPIAL champion Belle Vernon in the semifinals next week at a time, date, and location to be announced.

Late Touchdown Lifts Pine-Richland Past Prep in 5A Quarters; Allentown Central Catholic Topples Meadville in 4A
Gators Roll Reynolds, Head to PIAA Class 1A Semifinals
This website or its third-party tools process personal data.In case of sale of your personal information, you may opt out by using the link Do not sell my personal information.
×
Manage consent