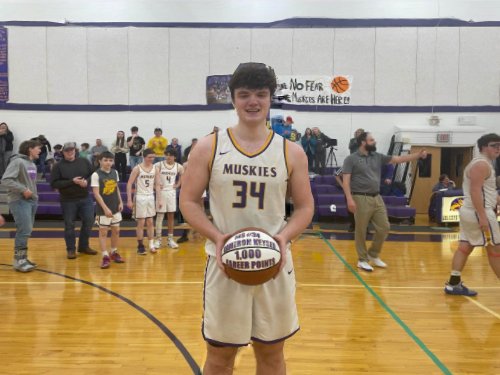 JAMESTOWN, Pa. – Cam Keyser had a monster game, pouring in a career-high 40 points as Jamestown earned an 83-41 win over George Junior Republic.

Keyser scored 20 points each in both the first and second half and had 13 in the second quarter. He made 17 shots from 2-point range as well as a pair of 3’s and was 0-of-1 from the free throw line.

The Muskies scored 29 points in the second quarter to build a 44-22 halftime advantage.

Elijah Gist led GJR with 22 points, 19 of which came in the first half.

The Mustangs outscored the Golden Eagles 31-25 in the second half en route to the win.

Remington Hart had a game-high 17 points for Kennedy Catholic.

The Oilers outscored the Trojans 33-20 in the second half en route to the win.

Cam VanWormer scored 12 points for the Oilers, while Sayiid Donald scored all 10 of his points in the second half. Ethen Knox also added eight points.

Conneaut outscored Cochranton 15-9 in the fourth quarter, but the Cardinals outscored CASH 9-5 in overtime.

Connor Perrye had 21 points in the loss for CASH, while Tristan Shelatz had 13 points.

SAEGERTOWN, Pa. – A 20-point second-quarter outburst gave Eisenhower the lead, and the Knights held off the Panthers for a 57-55 Region 3 win at Saegertown.

Kris Bunk scored 10 of his game-high 20 points in the second quarter.

Saegertown outscored Eisenhower 14-11 in the first quarter, but the Knights took a 31-25 halftime lead after the second. The Panthers had the edge in each of the third and fourth quarters with identical 15-13 scores, but couldn’t get the game-tying points.

In addition to Bunk’s 20, two other Eisenhower players were in double figures. Wyatt Lookenhouse had 14 and Kael Hunt had 10.

Brady Greco led the Panthers with 15 points. Henry Shaffer had 12 points and Sully Zirkle had 10.

SLIPPERY ROCK, Pa. – John Sabo led a trio of Slippery Rock players in double digits with 17 points, as the Rockets overcame a dismal half to down visiting Moniteau, 44-31.

Slippery Rock trailed 17-11 at halftime before outscoring Moniteau 21-6 in the third quarter to take control of the game.

Dylan Gordon hit three 3-pointers and scored 10 of his 11 points in the quarter for the Rockets.

Brett Loughry chipped in with 12 points for the Eagles, while Gavin Lutz added six.

Jack Burchard had 11 points and Khalon Simmons had 10 points for Meadville.

SUGARCREEK BOROUGH, Pa. – D’Andre Whitman poured in 23 points and pulled down 13 rebounds as Rocky Grove earned a 71-40 win over Reynolds.

Rocky Grove went on a 30-10 run in the second half to assume control.

Blayne Baker was also in double figures for Rocky Grove with 13 points.

Sambuchino also pulled down 10 rebounds, while Amaree Pickens added 11 points for the Ramblers, who bounced back after back-to-back losses in the Burger King Classic.

Derek Douglas knocked down four 3’s on his way to 18 points for the Tigers, while Lamont Austin added 12 points and Owen Schenker nine.

Luke Mild poured in 26 points in the loss for West Middlesex, while Richie Preston added 12.

ALBION, Pa. – Archie Murphey led a balanced Fairview effort with 13 points as the Tigers earned a 60-28 win over Northwestern.

Jeremy Frazao had 11 points for the Tigers in the win.

UNION CITY, Pa. – Union City scored 18 points in both the third and fourth quarters to turn a 9-point halftime lead into a 55-32 Region 3 win over visiting Youngsville.

Bryce Drayer scored seven of his game-high 20 points in the fourth quarter as the Bears pulled away.

Union City raced out to a 13-2 lead after the first quarter, but Youngsville came back to outscore the Bears 8-6 in the second to cut the halftime deficit to 19-10.

ERIE, Pa. – Nate Edwards scored 16 points as Girard earned a 64-52 win over Mercyhurst Prep for its 10th win of the season.

Parker Schmidt was also in double figures for Cambridge Springs with 12 points.

Kamden Kramer added 16 points in the win for the Trojans.

Nick Krahe had another double-double for Harbor Creek with 21 points and 15 rebounds, while Brady Rzodkiewicz had 14 points.

Danny Odem added 10 points for Farrell, which led 41-13 at halftime en route to the win.