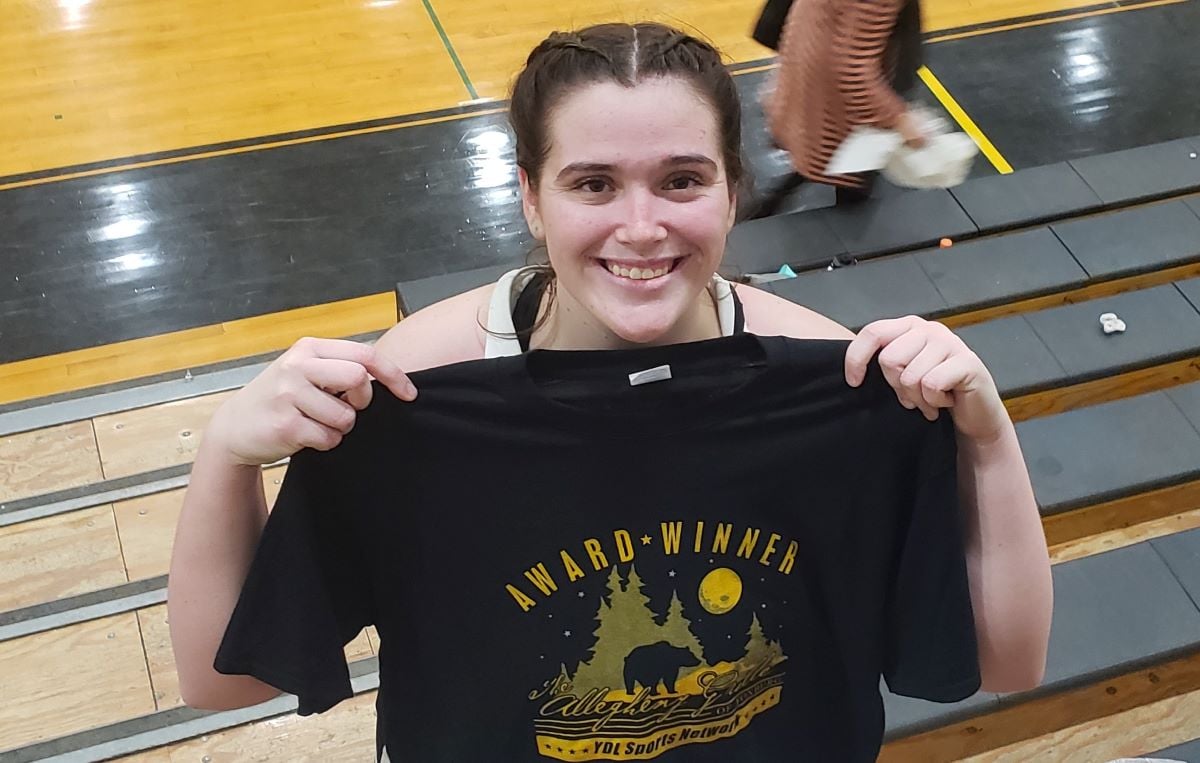 KNOX, Pa. – Leading by three to start the fourth quarter, Keystone opened the quarter on a 14-6 run on its way to a 41-28 win over visiting Clarion.

Mia Traister was strong early in the quarter for the Lady Panthers scoring five points, including a banked home 3-pointer, while Allegheny Grille of Foxburg Player of the Game Natalie Bowser put the capper on the win by scoring six of her game-high 18 points in the final eight minutes.

Bowser talked about her performance and the win.

The game was really the tale of the quarter breaks in each half.

Clarion came out strong and led 10-9 at the end of the first quarter before Keystone adjusted inbetween quarters and outscored the Lady Cats 11-3 in the second quarter to take a 20-13 halftime lead.

It was Clarion’s turn to push back in the third quarter getting with three by the end of the frame before Keystone again adjusted inbetween quarters to take the 13-point win.

The Golden Damsels, who entered the contest at 2-9, trailed 10-8 at the end of the first quarter before proceeding to outscore C-L, which came into the game at 6-6, 24-11 over the next 16 minutes.

Katie Gezik led the charge scoring 10 of her team-high 14 points in the middle two quarters.

Union outscored the Lady Lions 11-4 in the second quarter to take a 19-14 halftime lead before extending the advantage to 32-21 by the end of the third quarter.

Cheyenne Dowling added six of her 10 points in the second and third quarters for the Golden Damsels, who also got seven points from Grace Gallagher.

The Lady Wolves led 16-3 after eight minutes before shutting down the Ramettes in the second quarter.

Kasmierski had a game-high 20 points to go with 14 rebounds, two steals, and a blocked shot.

HYDE, Pa. – The Lilys grew wild for Huntingdon Tuesday night in a 54-32 road win over Clearfield in Mountain League play.

Slawson had 11 points, seven rebounds, and six assists with Martin adding a 12-point, 10-rebound double-double for the Lady Panthers.

Behind Harmon, who has three 30-point games this season and a 29-point contest, Redbank Valley led 32-4 at the end of the opening quarter.

Alivia Huffman scored eight of her 16 points in that opening eight minutes as well with Caylen Rearick then hitting three second-quarter 3-pointers while scoring 11 of her 13 points in the quarter.

MARIENVILLE, Pa. – Brooklyn Taylor hit three second-half 3-pointers on her way to a game-high 20 points, as Karns City pulled away from Forest Area, 54-23.

The Lady Gremlins led 8-4 at the end of the first quarter and 20-10 at halftime before outscoring the Fires 22-8 in the third quarter with Taylor hitting a pair of triples while scoring nine points in the quarter.

FRILLS CORNERS, Pa. – Racing out to a 19-0 lead at the end of the first quarter, North Clarion defended its home court with a 53-18 win over Cranberry.

Emma McFarland scored all 11 of her points in the opening eight minutes while hitting three long balls in the quarter.

Kendell Findlay had 10 points for Cranberry.

RIDGWAY, Pa. – Leading 21-4 at the end of a quarter, Ridgway cruised to a 57-15 win over visiting Brockway in AML South action.

Aaron Sorg led the Elkers with 16 points with Jack Benninger scoring 14 and Alex Merritt and Hunter Beeler eight each.

DUKE CENTER, Pa. – Shene Thomas had 20 points and seven rebounds to help Otto-Eldred to a 68-23 home NTL win over Austin.

Manning Splain added 15 points and Austin Cousins 12 for the Terrors.

SLIPPERY ROCK, Pa. – John Sabo led a trio of Slippery Rock players in double digits with 17 points, as the Rockets overcame a dismal half to down visiting Moniteau, 44-31.

Slippery Rock trailed 17-11 at halftime before outscoring Moniteau 21-6 in the third quarter to take control of the game.

Dylan Gordon hit three 3-pointers and scored 10 of his 11 points in the quarter for the Rockets.

Keyser Has Monster Game in Jamestown Win; Mercer Tops Kennedy Catholic; Cochranton Outlasts CASH in Overtime Jan. 10, 2023
Jan. 11, 2023 District 9 and District 10 Basketball Schedules Powered by Hunter’s Station Golf Club
This website or its third-party tools process personal data.In case of sale of your personal information, you may opt out by using the link Do not sell my personal information.
×
Manage consent