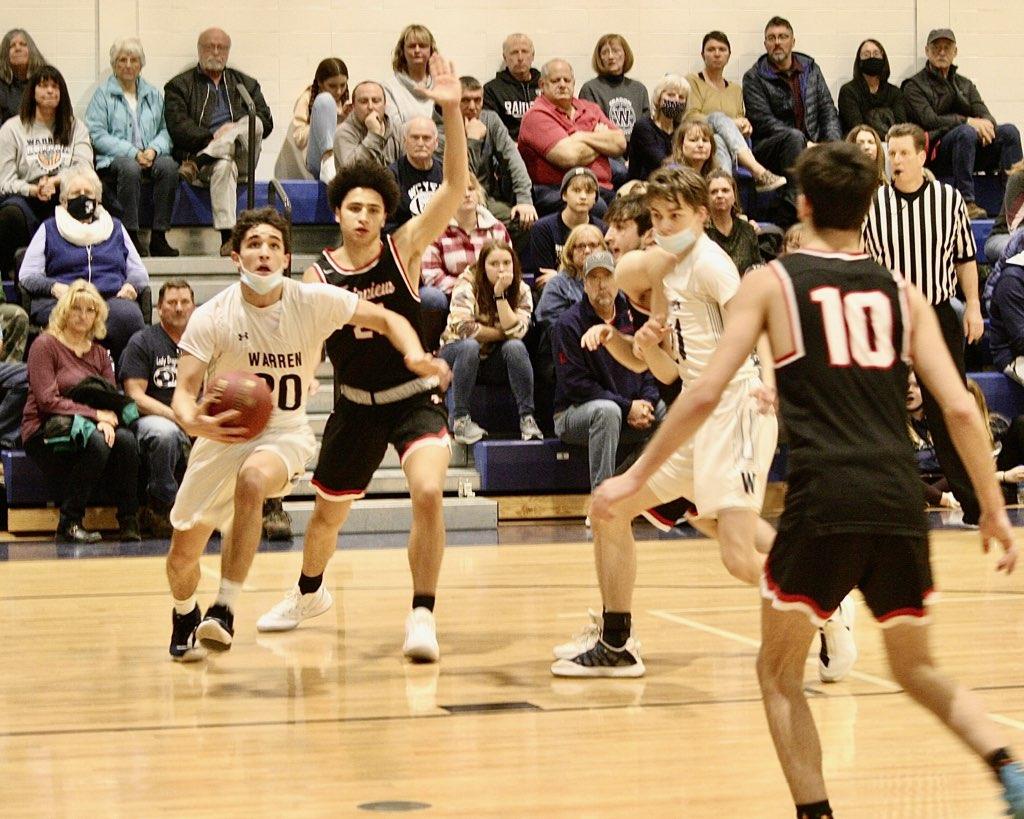 Warren's Kody Vega drives while being defended by James Sitter (back) and Jeremy Frazao (10). Photo by Jon Sitler.

Both teams came into the game with identical 3-0 region records, and with the win, Fairview remains District 10’s lone unbeaten boys’ team at 11-0 overall.

The Tigers’ opening spurt was punctuated by a steal and one-handed jam from Logan Frazao.

Frazao scored 13 of his 16 points in the first half and was named Allegheny Grille of Foxburg Player of the Game.

After jumping out to the early lead, Fairview never led by fewer than seven until a Brady Berdine bucket for Warren cut the lead to six, 44-38 with five minutes to play.

The Tigers responded, going on an 18-8 run to close the game.

James Sitter scored a game-high 22 points for Fairview, including 11 in the fourth quarter to help the Tigers pull away. Jeremy Frazao also scored seven of his 13 points in the fourth, while Tyler Shultz finished with eight. The Tigers also drained eight threes in the game, including four from Sitter.

The Tigers held Warren’s starting backcourt of Tommy Nyquist and Parks Ordiway without a point in the first half. The duo heated up in the second half, finishing with 10 and eight points, respectively.

UNION CITY, Pa. – Isaac Johnson scored 17 of his team-high 19 points in the second half and overtime as Saegertown outlasted Union City in a Region 2 thriller, 51-50.

Union City led 22-17 at halftime, with Saegertown rallying to tie the game 32-32 at the end of the third quarter.

Johnson scored six points in the fourth quarter for the Panthers, while Zack Yoder also knocked down a big three.

Matt Bennett scored a game-high 22 points for Union City, including five in the fourth quarter to help send the game to overtime.

Bryce Drayer had four points in the extra session for UC, but Saegertown got buckets from Johnson, Yoder and Jaden Wilkins to help get the win.

Wilkins was also in double figures for Saegertown with 10 points, while Drayer had 13 and Wyatt Post 11 for Union City.

The Hornets built a 31-12 halftime lead en route to the win.

Aidan Enoch had 15 points and Tyson Djakovich 12 for the Hornets.

Richie Preston added 13 points for the Big Reds, who led 23-7 at halftime en route to the win.

JJ Lehman had 11 for the Jackets, while Geremia Dell’omo and Dylan McDonald added 10 each.

Johnson was one of three Oil City players in double figures, as Cam VanWormer netted 12 points and Jake Hornbeck 11.

ERIE, Pa. – Semonte Lofton scored 18 points, but it was Canisius that earned a 62-58 win in the opening round of the Burger King Classic.

The Classic is making its return after a one-year hiatus due to COVID.

Jake Sambuchino had 13 points and Amaree Pickens added 11 for the Ramblers.

Shane Cercone had a monster game for Canisius with 31 points.

CORRY, Pa. – Logan Joncas had another big game with 32 points as Corry got a 73-42 Region 5 win over Fort LeBoeuf.

Markus Lambert was also in double figures for Corry with 14 points.

Josh Reisenauer and Nathan Held were also in double figures for the Blue Devils with 12 and 11 points, respectively.

The Blue Devils led 26-10 at halftime en route to the win.

Noah Burk had 13 points for Maplewood.

FRANKLIN, Pa. – Camdon Bashor had a double-double with 20 points and 10 rebounds as Franklin earned a 49-27 win over Oil City in the Route 8 rivalry.

Lauren Billingsley had 15 points and five boards for the Lady Knights.