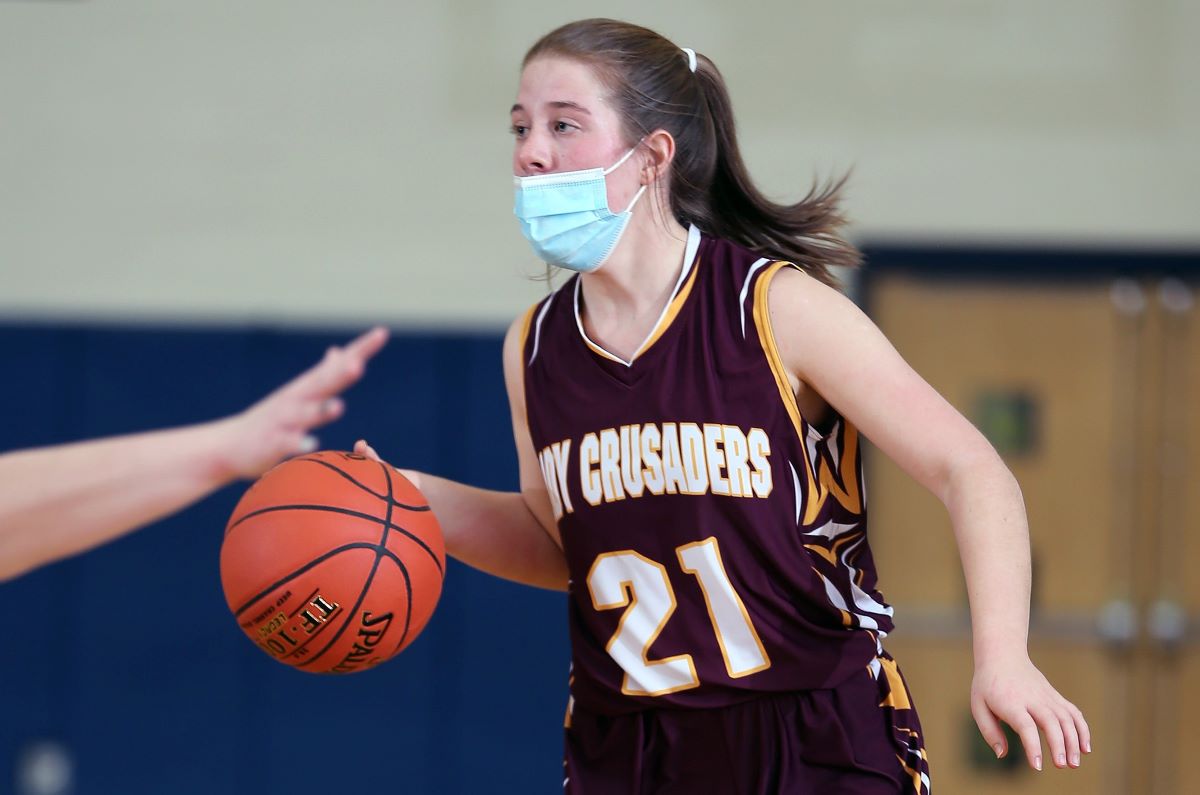 Kosko had a game-high 13 points for the Cardinals with Armanini adding 12 points. Harrison Starr chipped in eight tallies in the win.

Jordin Sommers added 13 points in the victory for the Beavers while Michael Orzechowski scored 10 points.

EMPORIUM, Pa. – Caden Beldin and Hayden Brown each scored 16 points in a 49-35 win for Cameron County over visiting Smethport.

Dylan Guisto added 10 points in the victory for the Red Raiders.

Layne Shall led Smethport with 12 points.

Seven of Geci’s points came in the first half helping the Lady Crusaders to a 20-9 halftime lead.

Northern Potter closed the gap to six, 29-23, by outscoring ECC 14-9 in the third quarter behind seven points from Aubrey Anderson but couldn’t complete the comeback. Anderson led the Lady Panthers with nine points with Courtney Martin scoring seven.

Lucy Klawuhn chipped in 12 points in the win for ECC with Tori Newton adding eight.

PUNXSUTAWNEY, Pa. – Sarah Weaver hit a 3-pointer with 8.8 seconds to play to lift Punxsutawney to a 44-41 win over visiting Tyrone.

With the game tied at 41, Weaver got herself open at the right elbow and took a pass from Kiersten Riley and hit nothing but net.

Stephanie Ramsey had a last-second shot to tie the game for Tyrone, but it was off the mark.

The game was close throughout with the teams tied at six after one quarter and 19 at halftime before Karns City took a 30-27 lead going to the fourth quarter with five different players combining the score the 11 third-quarter points for the Lady Gremlins.

Selena Buttery had a double-double of 11 points and 16 rebounds for Brockway with Danielle Wood also adding 11 points. Buttery chipped in eight blocked shots.

KNOX, Pa. – Doubling up visiting Moniteau in the middle two quarters, Keystone opened its season with a 53-41 win over the Lady Warriors.

The Lady Panthers trailed 19-7 at the end of the first quarter but outscored Moniteau, 32-16, over the next two frames.

Emily Lauer scored all but six of her team-high 23 points in the middle two quarters, including nine tallies in the second quarter and eight in the third, to pace Keystone. Natalie Bowser chipped in 14 points in the victory.

Aslyn Pry had a monster game for Moniteau with 28 points and 14 rebounds, while Kendall Sankey added six points and four assists.

DUKE CENTER, Pa. – Katie Sheeler scored a game-high 25 points, all in the first three quarters, and added three rebounds and three steals, as Otto-Eldred raced past visiting Smethport, 62-16, in a game that was scheduled at the last minute.

Earlier Monday both teams lost games with Otto-Eldred’s game vs. Kane and Smethport’s game vs. Port Allegany being postponed because of COVID-19 protocols, so the teams rearranged things to play each other.

RIMERSBURG, Pa. – Trailing for the first time in the game with just over six minutes to play, North Clarion turned to sophomore Emma McFarland, and the first-year starter delivered.

First, McFarland gave the She-Wolves, who have won 23 straight regular-season games dating back to the start of last season and 43 straight games that have counted in the KSAC standings dating back to a loss to Karns City Jan. 6, 2016, the lead for good with an old-school 3-point play at the 6:06 mark.

Then, with 5:20 to play she fed Amya Green for a fastbreak layup that put North Clarion ahead, 38-35.

Neither team scored again until Addison Shaftic hit a pair of free throws to extend the She-Wolves lead to five, 40-35, with 3:44 to play and Gwen Siegel made it 41-35 with a free throw 21 seconds later.

An old-school three by Keria Croyle with 3:17 left brought Union back within three, 41-38, but Siegel, who had a game-high 21 points to go with a game-best 16 rebounds, made it 43-38 with a layup, and Union never got closer than three the rest of the way.

Siegel talked about her game and the win.

The rebounding edge helped the She-Wolves overcome 31 turnovers in the game.