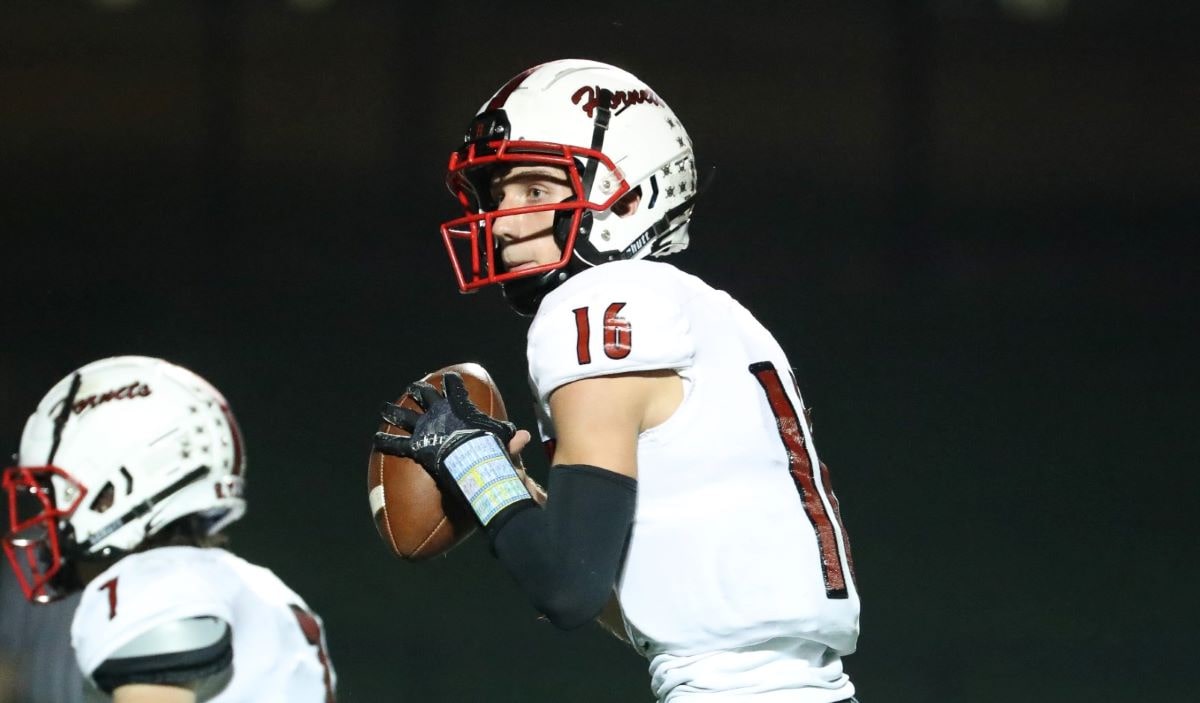 Henwood, who is just the third Hickory quarterback to ever throw for 3,000 career yards, was 17 of 23 passing for 340 yards in the victory. He finished the night with 3,217 career yards.

Wiesen also had a big night on the ground rushing 13 times for 112 yards. Henwood added 28 yards rushing on four carries.

SHARON, Pa. – Thanks to a fantastic game from Logan Breese, Grove City won at Sharon’s Tiger Stadium for just the fourth time in its history.

Breese threw four touchdowns and ran for a fifth while also going over the 3,000-yard passing mark in the win.

Breese was the main reason why Grove City (2-1) vanquished some demons going 12 of 20 for 267 yards, the four scores and an interception. He finished the night with 3,056 career passing yards setting up a battle of 3,000-yard passers next week between him and HIckory’s Michael Henwood.

Three of the scoring passes went to Anthony Pereira including from 75 yards, 40 yards and 26 yards. Pereira caught six passes for 158 yards. The fourth scoring toss – which was Breese’s first of the night – was a 67-yard toss to Zack Martin, who had two catches for 80 yards. Breese, who ran three times for 36 yards, added a 30-yard touchdown run. Anthony Nemec also had a TD run for the Eagles and finished with a team-best 62 yards on 10 carries

FRANKLIN, Pa. – James Swanson accounted for over 300 yards of total offense and Warren scored 35 points in the second half en route to a 35-12 win over Franklin.

Trailing 6-0 at halftime, the Dragons (1-1) took the opening drive of the third quarter and scored on a Micah Passmore 7-yard run.

Swanson was then on the receiving end of a 19-yard score from Alex Borger on a trick play and found the end zone again less than two minutes later after a Franklin fumble on a 34-yard run.

He capped his performance with a 50-yard scoring run in the fourth quarter.

Franklin took its 6-0 halftime lead on an Aaron Burkhart 1-yard run. Hunter Marstellar connected with Cole Buckley on a 35-yard touchdown in the fourth quarter for the Knights (1
-2).

Cade Adams had five receptions for 54 yards for Franklin (1-2), while Passmore had 79 yards through the air and 61 on the ground for the Dragons.

Cam Russell and Sean Stack also scored on the ground for the Oilers, who outscored Conneaut 14-0 in the second half after taking a 14-13 lead into halftime.

Runs by Stack (6 yards) and Stahl 1 gave the Oilers (3-0) a 14-0 lead, but Conneaut got back into the game thanks to a 14-yard scoring run from Max Lewandowski and a 3-yard run by Nathan Bortnick with the latter coming with just 48 seconds left in the first half.

The Eagles (1-1), though, had a short kickoff recovered by Oil City to start the second half, and Russell broke free on a 28-yard run to set up his touchdown that expanded the lead to 20-13 2:20 into the half.

Earlier in the game, Braydon Crocker recorded a pair of tackles to become Oil City’s all-time tackles leader. The junior passed Christian Cole for the honor.

FAIRVIEW, Pa. – Gus Campbell ran for 175 yards and three touchdowns to lead Mercyhurst Prep to a 35-28 win over Fairview.

There was an offensive explosion in the second half after Prep (1-2) led 7-2 at halftime.

Fairview (1-2) took the lead on a Sam Burge 30-yard touchdown run, but it proved to be short-lived.

Matt Luce connected with Sam Gonzalez on a 63-yard touchdown to give the Lakers the lead back.

Fairview jumped back in front, 16-14 on a 55-yard connection from Tyler Corbin to Logan Frazao.

Fairview’s Jared Gennuso returned the kickoff after the 13-yard run for a TD to make it a one-score game again, but Campbell’s third touchdown of the game put the game out of reach.

Gennuso rushed for 140 yards for the Tigers and Corbin threw for 172 yards.

The Royals (1-2) still trailed, 12-7, at halftime but used a pair of touchdown runs apiece in the second half JJ Woodward and Jermaine Selby to turn the game around.

Woodward finished the night with three touchdowns on the ground and ran 18 times for 86 yards, while Selby had a game-high 148 yards rushing on 12 carries with the two scores, including a 41-yard touchdown run with 6:11 to play that put the Royals ahead 35-18.

Butler (0-3) gained the 12-0 lead in the first quarter on a 25-yard Cooper Baxter to Bryon Manchester scoring pass and a 34-yard Justin Kabay run. But the Tornado didn’t score again until the fourth quarter when Julian Jones found paydirt from 31 yards out to close the deficit to 21-18. Baxter then finished off the scoring for Butler with three minutes left on a 12-yard run.

Baxter ran 14 times for 54 yards and was 4 of 10 passing for 55 yards and the touchdown while also throwing three interceptions. Jones ran for a team-best 64 yards on five carries while Kabay added 61 yards on seven totes.

Adding to their strong nights, both Woodward and Selby had interceptions on defense for Erie.

WATERFORD, Pa. – The dynamic duo of Tristin Harris and Jack Rimpa once again led the way for Fort LeBoeuf, as they improved to 3-0 with a win over Girard.

Harris carried for 182 yards and four touchdowns and Rimpa had 134 yards and a pair of scores.

Almost all of their damage came in the first half, as LeBoeuf built a 35-0 halftime lead.

Harris capped his performance with a 67-yard touchdown run in the second half. He also had a 75-yarder in the first half.

Gunner Bax led the Yellow Jackets (1-2) on the ground with 73 yards, while Austin Barrett ran for 59 yards and a touchdown.

Donovan Davis added a rushing touchdown for the Bison.

Andy Close contributed to this story

Sebastian Show Leads Otto-Eldred to High-Scoring Win at Port Allegany Saturday
Otto-Eldred’s Sebastian Named District 9 Jim Kelly Player of the Week Powered by the Allegheny Grille
This website or its third-party tools process personal data.In case of sale of your personal information, you may opt out by using the link Do not sell my personal information.
×
Manage consent