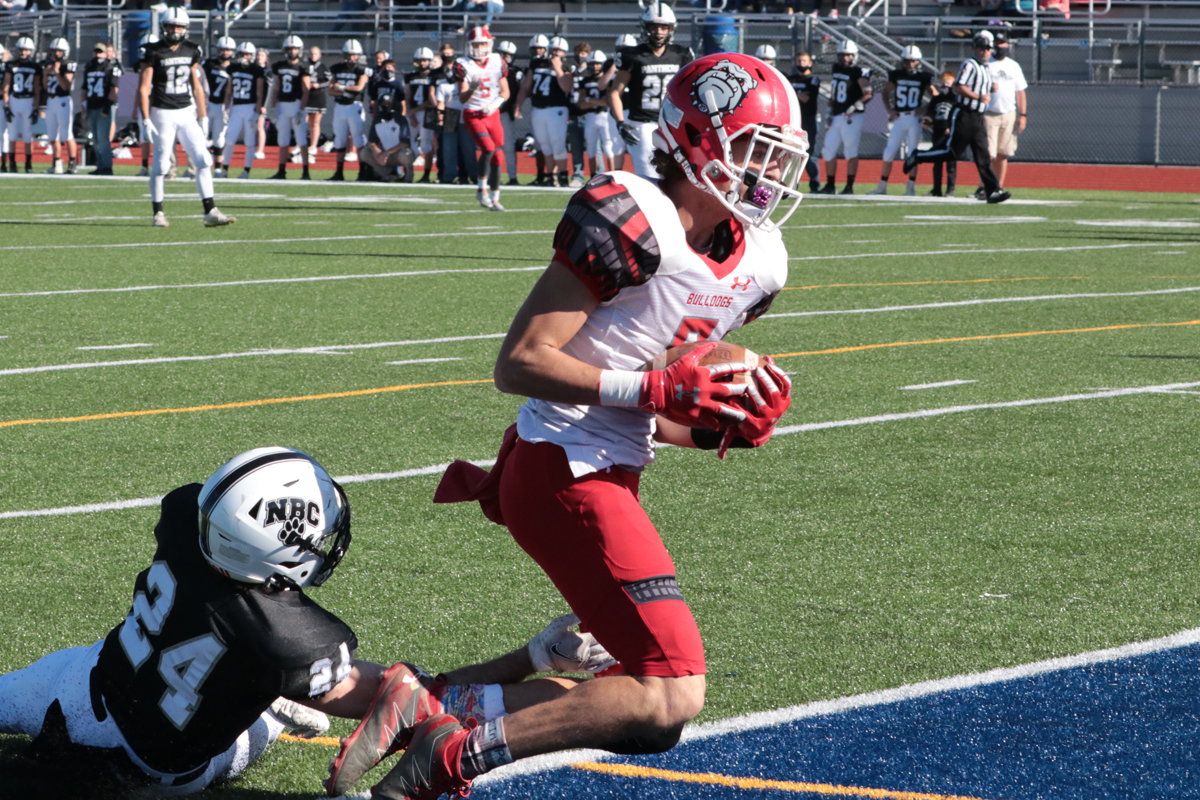 Redbank Valley's Chris Marshall runs into the end zone for his 33-yard touchdown reception from Cam Wagner during the first quarter of Saturday's game against Northern Bedford in Windber. Marshall also had an interception, helping the Bulldogs to a 28-15 win over the Panthers at Windber Stadium.

WINDBER, Pa. — Dominating the trenches once again, the Redbank Valley Bulldogs were very defensive on their way to the program’s first PIAA state playoff victory Saturday afternoon against Northern Bedford.

Cashing in on three of what turned out to be six Northern Bedford turnovers into touchdowns, the Bulldogs raced to a 21-0 first-half lead and beat the District 5 champions, 28-15, at Windber Stadium.

It was certainly a playoff-worthy performance on what was anything but typical November playoff weather with temperatures in the low 70s.

Next up for the Bulldogs (8-0) is a quarterfinal matchup with District 10’s Reynolds next weekend at what appears to be a District 9 site and time to be announced.

In their fourth state playoff game, they Bulldogs won for the first time, without starting quarterback Gunner Mangiantini. He’s out for the season with a knee injury sustained at the end of last week’s win over Smethport.

“You think about the adversity that they’ve overcome, I don’t think many people gave us a puncher’s chance to win when 18 guys went out before Coudersport, and then I just said to them before the game, with all the adversity that you’ve dealt … you lost those guys for practice,” Bulldogs head coach Blane Gold said. “Why not win the first state playoff game in school history with our backup quarterback. Why not?”

Sophomore quarterback Cam Wagner, who threw three TD passes in the D9 semifinal win over Coudersport, played well enough and threw a 33-yard TD to Chris Marshall for the game’s first points. But this win was set up by another strong performance by the Bulldogs defense.

The Bulldogs limited a Panthers offense that came in averaging 40.1 points and 391 yards to just 147 yards on 63 plays. The Panthers only scored one offensive touchdown late in the fourth quarter with the game already sealed up.

Northern Bedford quarterback Thad Leidy, who went over 4,000 passing yards for his career in the loss, was backpedaling and avoiding the Bulldogs rush all afternoon. He completed just 15 of 35 passes for 152 yards with four interceptions and was sacked four times totaling 39 yards in losses.

Going into the Panthers’ last two possessions with the Bulldogs leading 28-8, Leidy was just 8-for-22 for 77 yards and the four interceptions. And the Panthers’ running game, counting the sack yardage, went for minus-five yards on 27 attempts.

“A ton of credit goes to our defense,” Gold said. “I think their quarterback went over 4,000 yards today and two running backs with close to 1,000 yards. This was a very, very good offense with a ton of weapons and our goal was to take away the running game and force them to throw it and I think that worked to perfection today.”

After the Bulldogs went three and out offensively to start the game, the Panthers fumbled it away on their first play with Tate Minich recovering at the Panthers’ 44. Five players later, Wagner found Marshall for their 33-yard scoring strike.

“I went over to coach (Jake) Dougherty and said they wanted something back-side with Chris,” Wagner said. “Chris beat his guy off the ball and I just kind of chucked it up and he ran under it and made a good play.”

“I had to just finish it and make the play,” Marshall said.

Minich picked off Leidy on the Panthers’ third-and-25 play from their own 14, giving the Bulldogs the ball at the Northern Bedford 44. Seven plays later Kobe Bonnano powered in for the first of his two 1-yard TD runs as quarterback in the short yardage situations.

“You look at that 14-0 start that was the difference in that game, so that was big,” Gold said. “And Cam made some big throws. Chris Marshall and Marquese Gardlock showed up for football on the first day of camp. And they’ve been total difference makers.”

Northern Bedford (7-2) scored its first points on a safety when the Bulldogs’ Brenden Shreckengost was tackled for a 3-yard loss in his own end zone. Perhaps grabbing some momentum, it was stopped on the first play after the free kick when Trenten Rupp intercepted Leidy for the second time.

However, the Panthers scored three plays after that when Brady Clark intercepted Wagner on a third-and-16 pass from the Bulldogs’ 23 and returned it 40 yards to the end zone.

But the Panthers weren’t able to move the ball until it didn’t matter.

The Bulldogs put the game away midway through the fourth quarter. After stopping the Panthers on downs at the Northern Bedford 41, the Bulldogs took nearly five minutes off the lock with eight straight running plays, the last three from Bonanno under center, who finally got in on his second 1-yarder to make it 28-8 with 6:47 left in the game.

Redbank Valley’s third turnover led to the Panthers’ only offensive drive of the game, 78 yards on eight plays with Dalton Smith scoring on a 2-yard run with 1:53 left, setting the final score.

Hickory’s Third Win Over Grove City Gives Hornets District 10 Class 3A Title
PIAA Announces Football Quarterfinal Sites, Times
We use cookies on our website to give you the most relevant experience by remembering your preferences and repeat visits. By clicking “Accept All”, you consent to the use of ALL the cookies. However, you may visit "Cookie Settings" to provide a controlled consent.
Cookie SettingsAccept All
Manage consent