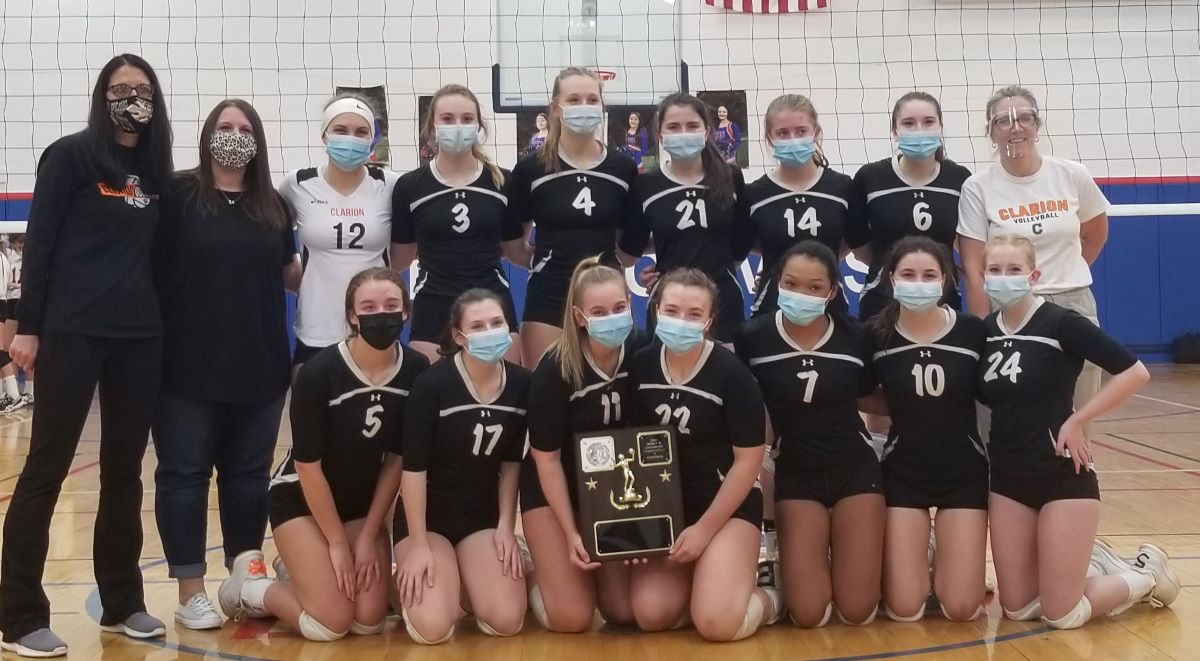 KANE, Pa. – Shari Campbell has won her fair share of District 9 Class 1A volleyball championships as the head coach of Clarion.

“I didn’t think we would (win a District title) this year,” Campbell said as tears swelled in her eyes. “I said to the girls, remember that day that we put in the jar the things that we can’t control because we heard that everything might shut down. The PIAA had to make some decisions, and they pushed things. That feels like a lifetime ago. We feel so blessed about the season. And as a mom of a senior, to know that she has closure, that she’s gotten to go after these goals one more time, it’s priceless.”

Clarion didn’t let the opportunity presented to it to go to waste, setting the tone early in the first set by scoring 11 of the first 14 points.

That included four kills from senior Erica Selfridge, who won her first title after transferring to the school from New York state over the summer.

Selfridge finished the first set with six kills and the match with 10 and also added a match-best seven digs.

“She is just another steady force,” Campbell said. “She has an ability to just control the ball (on defense) and get that ball to Brenna and then take swings that are quality. Her error percentage is also so low. She’s so explosive.”

While Selfridge controlled the first half of the first set, junior Korrin Burns took over from there.

Burns finished the set with five kills and then recorded 10 in the second set and nine more in the third to finish with 25 in the match and 1,000 in her career.

“It is very exciting,” Burns said of winning her third title. “It’s crazy, and I am so thankful that we get to continue this season, because of the virus. I am just having a good time.”

Senior setter Brenna Campbell also played a key role in the victory, and midway through the third set she also reached a milestone with her 3,000th career set assist. She finished the championship match with 35 set assists.

“It is all to my team,” Brenna Campbel said. “I couldn’t do this without 3,000 kills. It is really my team that did this for me. So, I have to thank them more than myself.”

While Clarion ended up dominating the second set, ECC started the set strong and led 4-3 while only trailing by two, 8-6.

But the Lady Cats ended the set on a 17-2 run paced by nine kills by Burns, who now has 46 kills in two postseason matches, both three-set matches, an average of 7.7 per set.

“It’s always an aggressive mentality,” Burns said of Clarion’s offensive philosophy. “If you are just taking those easy plays, then you don’t really get anywhere in the game. You need to take good, aggressive swings.”

Watch the postgame interview with Burns and Breanna Campbell

Up two sets to none, Clarion made sure ECC didn’t get any life in the third set jumping ahead 4-0 and leading 11-4 following a kill by Payton Simko.

“It’s great,” Brenna Campbell said of winning another title, her third in her four seasons as the starting setter. “It is a tradition. We just continue it.”

“We are so grateful to have been able to make it to this spot today,” ECC head coach Kelsey Morey said. “This year, there were so many unknowns with COVID, we were just happy to make it through another week all season. So, to have made it here with a full season under our belt, everyone healthy, and as the District 9 runner-up, we are blessed to say the least.”

Clarion, as long as everything continues to advance ok, will be off until Saturday, Nov. 14, when it plays in the quarterfinals of the PIAA playoffs against the winner of the first-round game between District 6 champion West Shamokin and District 5 champion Conemaugh Township. That match should be at Clarion High School.

District 10, 9 Runners Enjoy Stellar Day At PIAA Cross Country Championships
PIAA Releases Girls’ Volleyball, Boys’ and Girls’ Soccer Playoff Brackets
This website or its third-party tools process personal data.In case of sale of your personal information, you may opt out by using the link Do not sell my personal information.
×
Manage consent