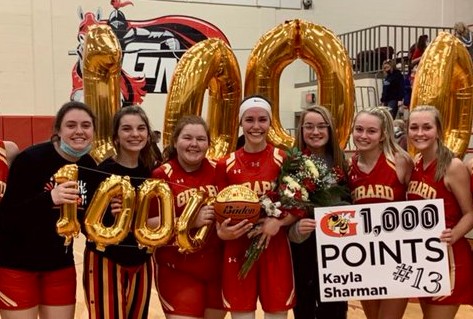 Girard's Kayla Sharman reached the 1,000-point milestone in a win over General McLane on Saturday.

Sharman, who needed 20 points coming into the game, scored 25 as the Yellow Jackets scrapped out the non-region win over the Lancers. The Saint Vincent commit knocked down a pair of three’s in the process.

Girard outscored GM 8-4 in the extra stanza to earn the win.

Ruhlman scored 15 of her 23 points in the second half, while Sam Ruhlman netted 14 points for the Dragons and Gracie Ruhlman eight.

Isabella Caskey led a pair of St. Marys players in double figures with 11 points, while Maura Caskey added 10 for the Lady Dutch.

The Tigers outscored the Raiders 20-2 in the first quarter and never looked back, scoring 40 of their 53 points in the first half.

Izzy Eimer netted 14 points in the win for Maplewood.

Halle Murcko had a team-high 14 points for Reynolds.

JyNaiza Selby netted 13 points for the Royals, who broke a 34-34 tie after three quarters.

Anthony was one of three West Middlesex players in double figures, as Carlie Beatty scored 17 points and Emma Mild 12.

LAS VEGAS, NEV. – Villa Maria dropped to 1-1 at the Tarkanian Classic with a 63-55 setback to Nevada powerhouse Spring Valley.

Carissa Dunham had a big game for the Victors, scoring 25 points, including seven made three’s.

Jayden McBride added 13 points and seven boards for the Victors, who will play again on Monday.

NEW CASTLE, Pa. – Franklin outscored Aliquippa 23-10 in the fourth quarter to rally for an impressive 57-49 win in the Clash at New Castle.

Scott Walters had a big fourth quarter for the Knights, scoring nine of his 11 points in the final eight minutes.

Easton Fulmer once again led the way for Franklin with 20 points, while Damon Curry had 10 and Luke Guth eight.

Donovan Walker paced the Quips with 12 points, while Damar Freeman and Demarko Walker chipped in with eight apiece.

WARREN, Pa. – Jacob Young scored 17 points as Seneca earned its second win over a Warren County team in as many days, beating Warren 55-42 in non-region play.

An 18-8 second quarter surge for the Bobcats gave them a 10-point advantage at halftime.

FREDONIA, NY. – Fredonia outscored Harbor Creek 52-49 in the fourth quarter on its way to rallying for a 52-49 win over Harbor Creek.

ERIE, Pa. – Jay Smith scored 17 points as Erie High picked up a non-region win over Shady Side Academy of the WPIAL, 64-52.

Tayjameir Carr added 10 points for Erie in the win, as the Royals built a 16-point halftime advantage.

Eli Tesovich had a game-high 21 points for Shady Side.

LAS VEGAS, NEV. – Jake Sambuchino scored 13 points for Cathedral Prep, but the Ramblers fell to Canyon Springs in the second round of the Tarkanian Classic, 48-41.

Semontae Lofton added 11 points for the Ramblers, who are now 1-1 in Las Vegas. They will play again on Monday.

Dec. 18, 2021 D9 Boys/Girls Recaps: Evens Leads Port Allegany Boys to Victory
Dec. 19, 2021 District 9 and District 10 Basketball Schedules Powered by Hunter’s Station Golf Club
We use cookies on our website to give you the most relevant experience by remembering your preferences and repeat visits. By clicking “Accept All”, you consent to the use of ALL the cookies. However, you may visit "Cookie Settings" to provide a controlled consent.
Cookie SettingsAccept All
Manage consent