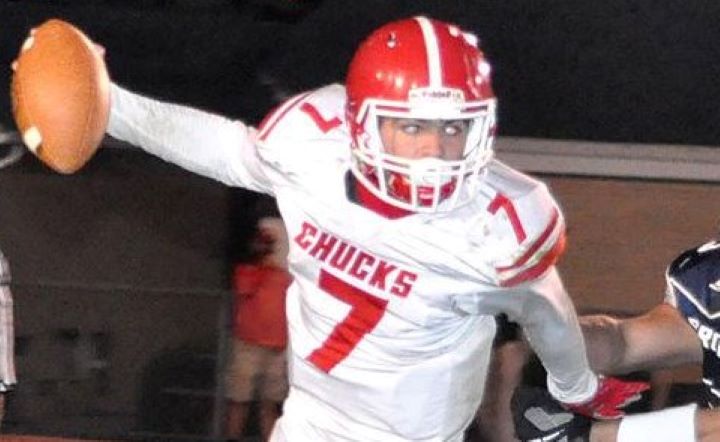 Zeke Bennett led the Chucks with 19 carries for 70 yards and caught two passes for 43 yards while Falgout carried 18 times for 55 yards and was 5 of 13 passing for 83 yards. Falgout also intercepted a pass on defense.

MORRISDALE, Pa. – Will Herring ran for a pair of touchdowns to lead West Branch to a 21-14 win over visiting Curwensville Friday night.

Thad Butler scored twice for Curwensville finding the end zone on a 23-yard run and then returning a kickoff 79 yards for a touchdown. Butler ran 14 times for 136 yards for the Golden Tide (1-5), who are slated to end their season at Keystone next week.

DUKE CENTER, Pa. – Cole Sebastian accounted for five touchdowns – three passing and one rushing and the other on a punt return as Otto-Eldred toppled Bradford.

Sebastian has 276 yards through the air and 56 on the ground as the Terrors evened their record at 3-3.

The Terrors jumped out to a 12-0 lead in the first quarter, as Sebastian connected with Ethan Smith on a 43-yard touchdown, and later in the quarter with Josh Rhinehart on a 57-yarder.

Bradford got on the board in the second quarter, as Austen Davis connected with Jarid Wilmoth on a 32-yard score at the 10:43 mark, but Sebastian was at it again just over two minutes later, again hooking up with Smith, this time on a 25-yard score to make it 20-7 at halftime.

The big-play ability of Sebastian was on full display in the second half as well.

The Canisius baseball commit scored on a 55-yard run and a 65-yard punt return in the third quarter, sandwiched in between a Jake Merry 40-yard fumble return for the Terrors.

Bradford’s Nolan Gonzalez had a 40-yard touchdown run to account for Bradford’s lone score of the second half.

PORT ALLEGANY, Pa. – Blaine Moses rushed for 182 yards and three touchdowns and added a receiving score as Port Allegany rolled past Cameron County, 44-6 to end the season on a three-game winning streak.

The Gators (3-4) responded with 44 unanswered points.

That started with Moses who scored on runs of 43 and six yards in the second quarter, followed by a Drew Evans 18-yard touchdown pass to Noah Archer that made it 22-6 at the half.

The Gators, who outgained the Red Raiders 418-142, struck just a minute into the third quarter courtesy of Moses, who scampered 42 yards for his third touchdown of the game.

Moses capped his brilliant night later in the quarter, hauling in a 21-yard touchdown from Evans.

Taro Tanaka added a late rushing touchdown for the Gators as well.

Evans finished 10-of-20 passing for 188 yards and the two touchdowns. Trey Ayers hauled in three receptions for 86 yards and Archer three for 55.

Dylan Baney threw for 85 yards but was intercepted four times, while Dylan Reider also added 39 yards on the ground.

Payton Spencer had two of those interceptions for the Gators, while Peyton Stiles and Tanaka had one each.

WARREN, Pa. – Landon Douvlos threw for 260 yards and two touchdowns and ran for another as Warren beat Moniteau 47-15 in what is believed to be the first-ever meeting between the schools.

The Dragons scored all 47 of their points in the final three quarters.

Freshman Tommy Nyquist led the Dragons in rushing, including a 58-yard touchdown run.

Micah Passmore had a passing and receiving touchdown for Warren (4-3), while James Swanson had two rushing and one receiving score.

Ethan Wilson added a receiving touchdown for the Dragons.

McDowell knocks off Cathedral Prep For Second Time Friday
Swaim, Bedford too Much for Clearfield