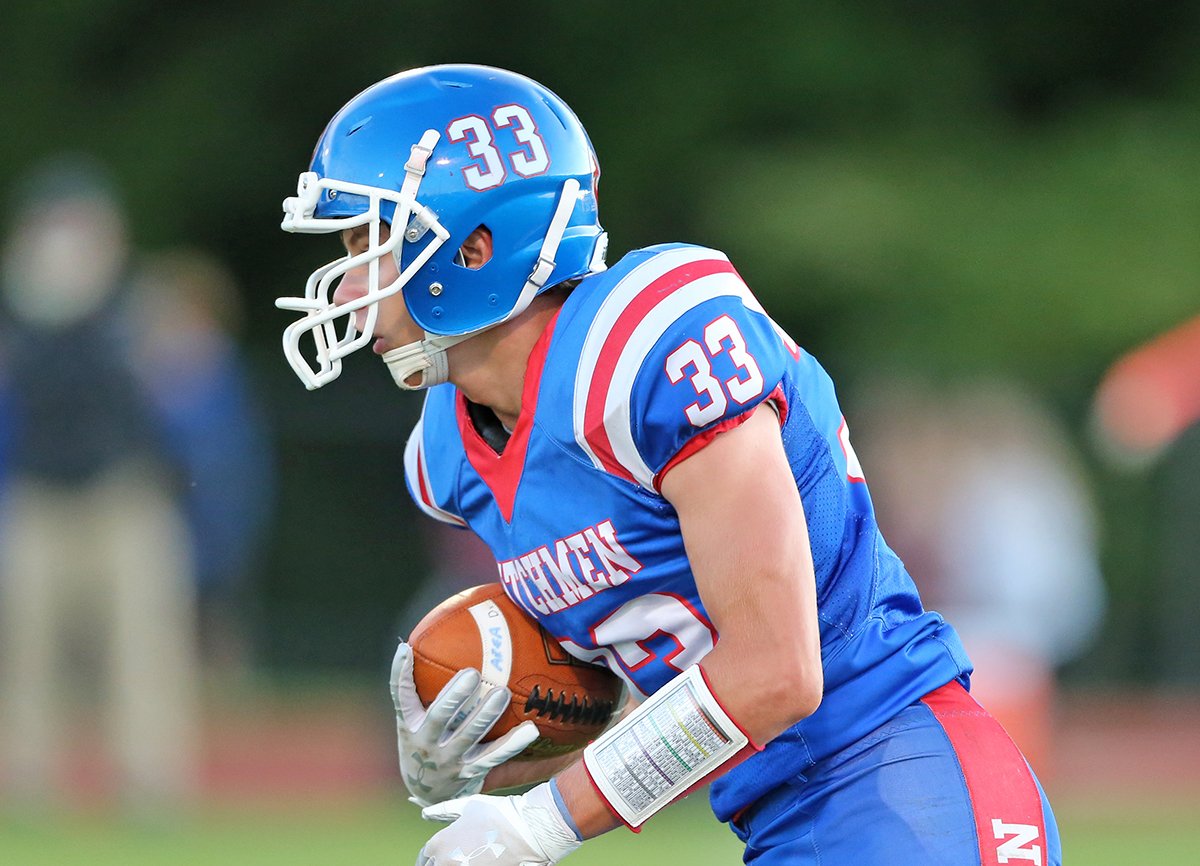 There’s a log jam at the top of the District 9 League’s Large School Division.

St. Marys’ 35-28 win over Karns City last week created a four-way tie in the loss column at the top of the standings. After dealing the Gremlins their first loss of the year on the road, the Dutch return home to face fellow 5-1 Brookville Friday night.

It’s a divisional schedule across the board in the District 9 League, five Large School games, and two matchups each in the Small School North and South.

Saturday’s Sheffield at Port Allegany game was canceled due to COVID-19 concerns at Sheffield.

In addition to the Dutch hosting the Raiders in the Large School, Ridgway (5-1) looks to keep pace at the top in a trip to Central Clarion (1-4) at Clarion University’s Memorial Stadium. Karns City (5-1) is back home looking to get back on track against Kane (3-3). DuBois (3-3) hosts Moniteau (1-4) while at the bottom of the standings, it’s Bradford (0-5) at Punxsutawney (0-5).

One week after Brookville dropped a 41-7 loss to Karns City at home, St. Marys traveled south to Butler County and stunned the Gremlins as quarterback Christian Coudriet threw his fifth touchdown pass of the game to Carter Chadsey with 40 seconds left for the come-from-behind win.

The Elkers have beaten St. Marys, but still have to play Karns City and Brookville. Meanwhile, they’ll head to CUP’s Memorial Stadium for a date with the Wildcats who got their first win at home, 34-6, against Kane last week.

Something needs to give when the winless Owls visit the winless Chucks. Bradford owns the district’s longest losing streak at 15 games. The Chucks were the last team Bradford beat back in 2019 and they’ve won two games since the beginning of the 2018 season.

The Beavers have won three straight games, including last week’s 55-0 rout of Bradford. They’ve outscored Kane, Ridgway and the Owls by a combined 110-12. They’ve averaged nearly 250 yards rushing per game in that span, scoring 11 TDs on the ground.

The Rovers ended their four-game losing streak with last week’s 26-8 win over Otto-Eldred while the Crusaders lost 32-18 to Cameron County, playing its first four-quarter game in three weeks.

For the Crusaders, Noah Cherry ran for 137 yards last week. He leads the team with 297 yards. Quarterback Ben Paul has thrown for 396 yards, completing 26 of 67 passes.

The Bulldogs head 120 miles east to face the winless Bucks. The teams share two common foes to date. The Bucks lost 40-0 in Week 3 to Smethport, which lost 27-6 last week to the visiting Bulldogs. Two weeks ago, Keystone beat the Bucks 29-12 after trailing them 12-7 at halftime. The Panthers dealt the Bulldogs their lone loss in a 22-20 win in the season-opener.

In last week’s 44-24 loss to Coudersport, quarterback Dylan Cross threw for a touchdown and ran for another, completing 9 of 19 passes for 141 yards while running for 81 yards on 13 carries. Braylon Frantaski caught five passes for 97 yards with Zack Pick returned a kick 81 yards for a TD.

The Hubbers are coming off their first loss of the year against Redbank Valley, 27-6, and travel to Emporium to play the Red Raiders who beat Elk County Catholic, 32-18. The Red Raiders’ lone loss is to Otto-Eldred (28-8) back in Week 3. Smethport beat Otto, 56-18, two weeks ago.

The Terrors visit the Falcons, who are coming off a 44-24 win over Bucktail. After losing their first two games, the Falcons have won two out of their last three games. Otto has dropped three straight games since handing Cameron County its only loss, including a 26-8 loss to Brockway last week.

Coudersport does most of its business offensively on the ground, led by quarterback Gavyn Ayer’s legs (68-435, 11 TDs). Dylan Kelly (72-334, 5 TDs) leads the team in carries. Ayers has thrown 30 passes all season, completing nine for 162 yards.

It’s a return to action for the Golden Tide, who were credited with a forfeit loss to Bellwood-Antis, something that’s not been done thus far in games that have been canceled in District 9 because of COVID-19 concerns as this one was.

Either way, the Tide remain in the D9 Class 1A playoff race regardless of how games differ in how they’re counted between them and the teams that play a D9-only schedule. They visit Purchase Line, a neighboring school district in a non-conference matchup.

Senior Connor Roberts is the quarterback in his second year after starting five games last year. He threw for 353 yards in the opening loss to Canon-McMillan and has 783 yards and 10 TDs overall. Sophomore running back Andrew Durig is a two-way threat as a receiver as well.

The Bison have yielded just 26 points on four touchdowns in their six wins, averaging

40 points per game. Offensively, the Bison are putting up 402 yards per game.

Billotte, a lineman on defense, leads the Bison unit with 47 tackles, nine of them sacks. Isaac Samsel has seven sacks while Shane Coudriet is second in tackles with 45.

Farrell-Wilmington Highlights Star-Studded Week 7 Football Slate in District 10
Union/A-C Valley Overcomes Mistakes, 18-Point Hole to Hand Keystone First Loss
This website or its third-party tools process personal data.In case of sale of your personal information, you may opt out by using the link Do not sell my personal information.
×
Manage consent