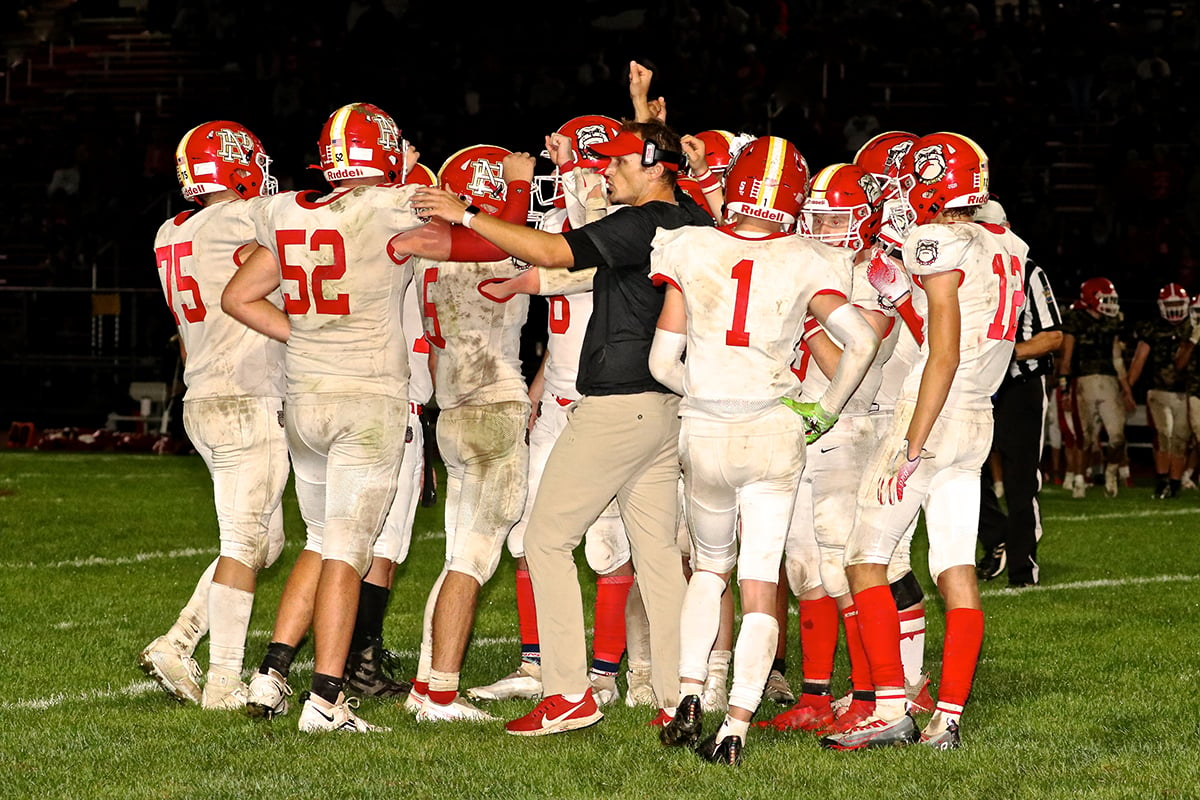 The Redbank Valley Bulldogs celebrate last week's 28-14 win at Punxsutawney. Since last year's season-opening 22-20 loss at Keystone, the Bulldogs have lost just one game — the PIAA Class 1A state final against Bishiop Guilfoyle. They host the Panthers Friday night. (Photo by Mike Maslar)

Five unbeaten teams remain in District 9 football and two lock up in New Bethlehem in a Region 2 showdown as the Keystone Panthers travel to play the Redbank Valley Bulldogs to highlight a 13-game Friday night schedule in District 9.

It’s a rematch of last year’s season-opening game in Knox when the Panthers edged the Bulldogs, 22-20. Since then, the Bulldogs have won 17 of 18 games with the lone loss coming in last year’s PIAA Class 1A final to Bishop Guilfoyle.

Outside of the District 9 League, Clearfield (2-1) travels to Philipsburg-Osceola (1-2) in Mountain League play while Curwensville (2-1) hosts Southern Huntingdon (2-1).

Keystone’s Week 1 win last year didn’t turn into a rematch as it was knocked out of the playoffs before another possible matchup. The Bulldogs never looked back and reached the state final, then have darted out to a 3-0 start this year as have the Panthers and new head coach Todd Smith.

While the Bulldogs were working hard to get by Punxsutawney in a 28-14 win, the Panthers eked out a 20-19 wild win at home against Brookville. The Panthers converted on a two-point conversion off a fake extra-point formation with just over six minutes left to set what would be the final score.

The Panthers were run-heavy in wins over Coudersport and Union/A-C Valley, but went to the air more in the win over the Raiders. Quarterback Rayce Weaver completed 5 of 11 passes for 134 yards and a touchdown. Running back Kyle Nellis threw a 52-yard TD pass to Tyler Albright, who caught four passes for 121 yards.

Nellis, who ran for 108 yards on 14 carries against the Raiders, is up to 392 yards on 56 carries and seven TDs for the season.

Redbank Valley is a different team than last year, but it’s still fast and dangerous with senior quarterback Cam Wagner leading the way. He’s thrown for 650 yards (42-for-58) with 11 TDs and three interceptions.

Wagner’s top receivers are Aiden Ortz (12-223, 4 TDs), Tate Minich (16-216, 3 TDs) and Ashton Kahle (8-126, 2 TDs). Mason Clouse returned a punt for a touchdown last week while Kahle nearly did on another, setting up a short TD pass from Wagner to Ortz that put the game away in the second half.

Another potential good game is a matchup on the turn at Karns City where the Gremlins hope to build on their first win of the season in a 28-0 shutout of Ridgway.

The Gremlins went total ground game against the Elkers, rushing for 317 yards and attempting just one pass that fell incomplete as they still don’t have their starting quarterback Eric Booher who is out with an injury that keeps him from playing behind center, but he is playing. He ran twice for 28 yards and a TD against the Elkers. He was one of 11 rushers in the game. Cooper Coyle led the Gremlins with 66 yards on six carries.

On the high end of the interesting games in the district, the Chucks head to the C-L Sports Complex to face the unbeaten Wildcats.

While Central Clarion was routing Union/A-C Valley, 43-6, the Chucks dropped their first game in a 28-14 loss to unbeaten Redbank Valley in a game decided a lot by a couple of special teams plays on punt returns.

Chucks senior running back Zeke Bennett has rushed for 545 yards on a whopping 74 carries, leading the Chucks’ run-heavy offense. Also running some is Landon Martz (26-170) while quarterback Seth Moore has completed 19 of 38 passes for 220 yards. Noah Weaver (9-145, 2 TDs) is the top receiver.

The Wildcats hadn’t run the ball much in their first two wins, but put up 221 yards on the ground against the Falcon Knights last week, a balanced attack led by Connor Kopnitsky’s 83 yards and three TDs.

The Raiders get to player their first home game of the season under the new lights that was part of the construction delay that took away the scheduled home game with Tyrone two weeks ago, They’ll be playing under them as the Warriors come to town on what’s also a very early Senior Night.

Easton Belfiore’s varsity debut at quarterback gave the Raiders a lift in their 20-19 loss at Keystone. He threw for 138 yards and three TD passes, two of them to Brayden Kunselman while running bck Jackson Zimmerman ran for 89 yards on 24 carries. Kunselman caught seven passes for 100 yards.

The Warriors are led by running back Hunter Stalker, quarterback David Dessicino and receiver Ashton Grossman. Stalker ran for 68 yards on 27 carries in last week’s 20-12 win last week at Cameron County. Logan Campbell actually scored all the team’s TDs on runs of 33, 3 and 6 yards.

The Beavers travel north to play an Owls team coming off a 33-26 loss to Otto-Eldred, its 20th straight setback dating back to the end of the 2019 season. The Beavers are also looking to rebound after a 41-7 loss at Clearfield.

The Rovers are coming off a 70-16 rout of Coudersport while the Falcon Knights were routed for the second straight week in a 43-6 loss to Central Clarion.

Brockway played two close games in a win over Kane and loss to DuBois before blowing out Coudersport. Sophomore quarterback Brayden Fox has thrown for 882 yards, completing 62 of 100 passes with 10 TDs against no interceptions. Alex Carlson (30-413, 5 TDs) and Dylan Hanna (9-208) are the leading receivers.

The Falcon Knights have been outscored 86-13 in losses to Central Clarion and Keystone. Backup quarterback Owen Bish scored the team’s lone points in last week’s loss with a 25-yard run. They gained 184 yards overall. Dawson Camper and Mikey Card are their leading rushers.

Both teams have played similar schedules and tough opponents as the combined six foes the Wolves and Elkers faced are 13-5. The common foe is unbeaten St. Marys, which blanked Kane 30-0 last week and beat Ridgway 27-6 in Week 2.

So something has to give in this winless matchup. Last year, the Elkers beat the Wolves, 42-6 and have won three of the last four with Kane beating the Elkers 25-21 back in 2019.

Running back Ricky Zampogna (53-326, 4 TDs) leads the Wolves while quarterback Kyle Zook has completed 30 of 64 passes for 298 yards with two TDs and six interceptions. Landon Darr (11-155) is the top receiver.

After a bye week, the Bucks dropped a 30-16 decision at Elk County Catholic. Brody Pentz ran for both TDs for the Bucks while Tanner Pettingill rushed for 134 yards on 20 carries.

Noah Cherry continued his hot start for the Crusaders with four more touchdown runs in last week’s win over Bucktail. That’s seven TDs for the season for Cherry as he and the Crusaders face Sheffield which is coming off a bye week.

Its not that the Red Raiders haven’t been competitive in their 0-3 start, getting outscored 69-32, including a 20-12 loss at home to Moniteau last week. Port has sandwiched two wins around a 29-24 loss to Central Clarion, including last week’s 28-0 shutout win at Smethport.

This is a rare non-conference, or league or region, whatever you want to call it between one of the district’s longest running rivalries. The Hubbers are coming off a 28-0 shutout loss to Port Allegany while the Falcons were walloped 70-16 by Brockway.

The Falcons beat the Hubbers, 6-0, last year and have won 16 of their last 21 meetings.

The Bison are coming off a lopsided win over DuBois that saw Brady Collins run for 161 yards on 16 carries with three touchdowns. They’ll try to beat the Mounties for the 11th straight time dating back to their last loss in 2011.

Neither team share a common foe yet. The Mounties opened with a win over West Branch before two straight losses to Huntingdon and Tyrone (49-0) last week.

Both teams have played Juniata Valley so far and won, the Rockets 28-14 last week and the Golden Tide 36-15 two weeks ago.

Tide quarterback Dan McGarry has had a hand in nearly all of the team’s yards from scrimmage, passing for 741 yards and rushing for 292 yards.

The Tide look to bounce back from a 40-14 loss at Bellwood-Antis last week. The Rockets, coming off the win over Juniata Valley, are led in a similar way by their quarterback Nate Myers. He’s thrown for 888 yards and leads the team in rushing with 403 yards.

Battle of Unbeatens Highlights Week 4 Slate as Region Races Begin to Heat up in District 10
YDL Sports Network to Broadcast St. Marys/KC, Union-AC/Bway, Seneca/Ike & Postgame Show Friday
This website or its third-party tools process personal data.In case of sale of your personal information, you may opt out by using the link Do not sell my personal information.
×
Manage consent