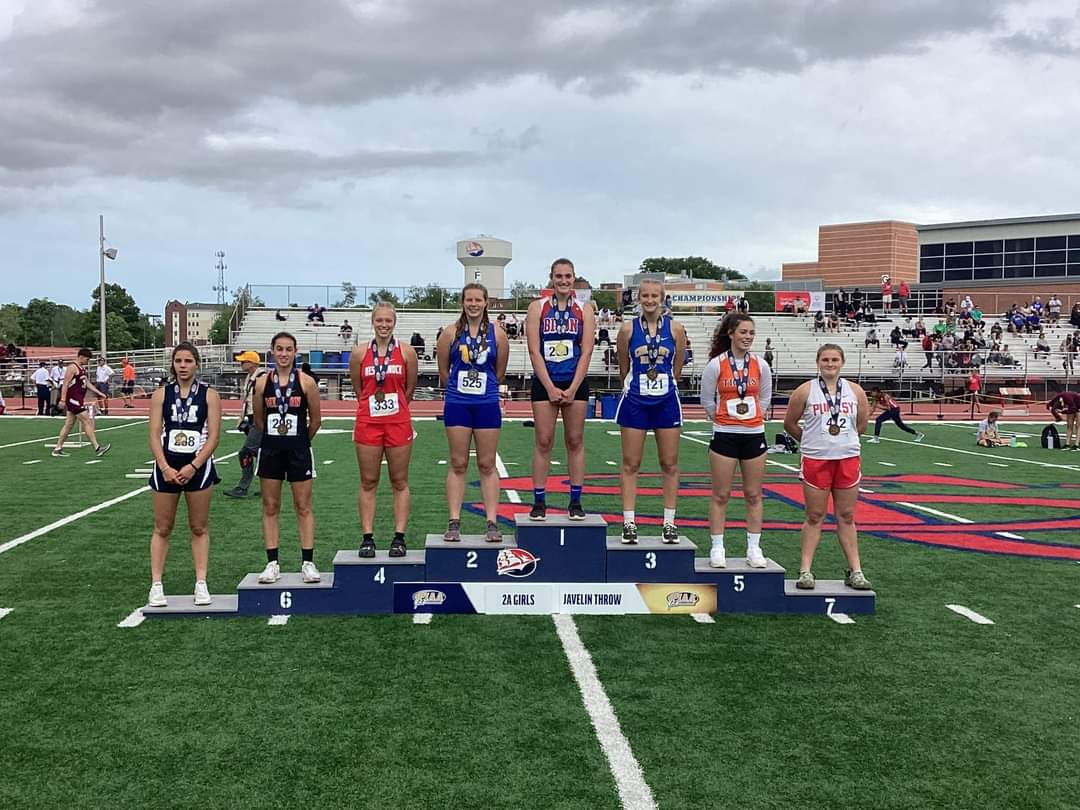 SHIPPENSBURG, Pa. – You wouldn’t know it by the weather, but it was a golden day for District 9 and District 10 athletes on day one of the PIAA track and field championships.

Four athletes – Union/A-C Valley’s Baylee Blauser and Hayden Smith, Fort LeBoeuf’s Audrey Friedman and Hickory’s Luca Bertolasio all took home gold medals in Class 2A – Blauser and Bertolasio in the long jump, Friedman in the javelin and Smith in the high jump.

Smith cleared 6-5 in the high jump as District 9 and 10 athletes took gold and silver, as Seneca’s Vincent Rupp cleared 6-4 to take second. Grove City’s Josh Dreves also took home one of his two medals on the day, clearing 6-0 to finish seventh.

In the girls’ long jump, Blauser proved why she was the top seed, leaping 18-6 ¾. That was enough to edge Minersville’s Devin Hubler, who went 18-4 ¾. Grace Bresnan of Reynolds also medaled in the event, taking sixth at 17-4 ¼.

Smith and Blauser talked about their gold medal efforts afterward:

Friedman, who was a medalist a year ago, came in as the favorite and delivered. Her winning throw measured 142-9. Again District 10 and District 9 went 1-2, as Union/A-C Valley’s Evelyn Bliss, who came into the finals seeded ninth out of nine, uncorked a throw of 140-11.

Friedman, who will compete in the shot put on Saturday, talked about reaching the top of the podium:

Bertolasio, meanwhile, had quite the journey. After competing for Hickory in their District 10 Class 3A baseball semifinal game against Franklin at Slippery Rock University on Thursday, he made the 216-mile trip to Shippensburg, arriving at 11 p.m.

He promptly got up and leaped 23-11, which was good enough to win by over a foot. Justice Shoats of Holy Redeemer was second at 22-9, while Dreves was fifth at 21-7 ¼.

It was all part of a big day for D10 and D9, as there were medalists across the field events as well as in the 1600-meter run, the only track event to run finals on Friday.

Oil City’s Baine Snyder finished sixth in the Class 2A girls’ high jump, clearing 5-0. Snyder will look to add her second medal on Saturday when she competes in the pole vault.

Moving to Class 2A boys, Coudersport’s Kevin Sherry took home fourth in the 1600 with a time of 4:16.31. Carson McCoy of Deer Lakes won the event in 4:13.14. It’s the first of what may be two medals for Sherry, who is seeded seventh in the 3200, to be run Saturday morning. Grove City’s Joshua Jones also turned in a medal-winning performance in the 1600, taking eighth in 4:18.72.

Also in Class 2A boys, Clarion-Limestone’s Ryan Hummell was fourth in the javelin at 166-7, an event won by Drew Murk (211-9) of Wyoming Area. In the discus, Redbank Valley’s Cam Wagner turned in a bronze effort with a heave of 162-5. The event was won by Penn State offensive line recruit J’ven Williams of Wyomissing at 167-0.

Class 3A girls saw a pair of medalists in the shot put, as St. Marys’ Payton Bauer took third with a throw of 39-11, while Franklin’s Ashley Alcorn was eighth with a heave of 38-3. The event was won by Elizabeth Tapper of Hempfield with a throw of 46-4 ¼.

The lone Class 3A boys’ medalist of the day was Harbor Creek’s Nick Krahe, finishing eighth in the shot put at 52-0 ½. The event was won by Wade Shomper of Cumberland Valley (59-9 ¾).