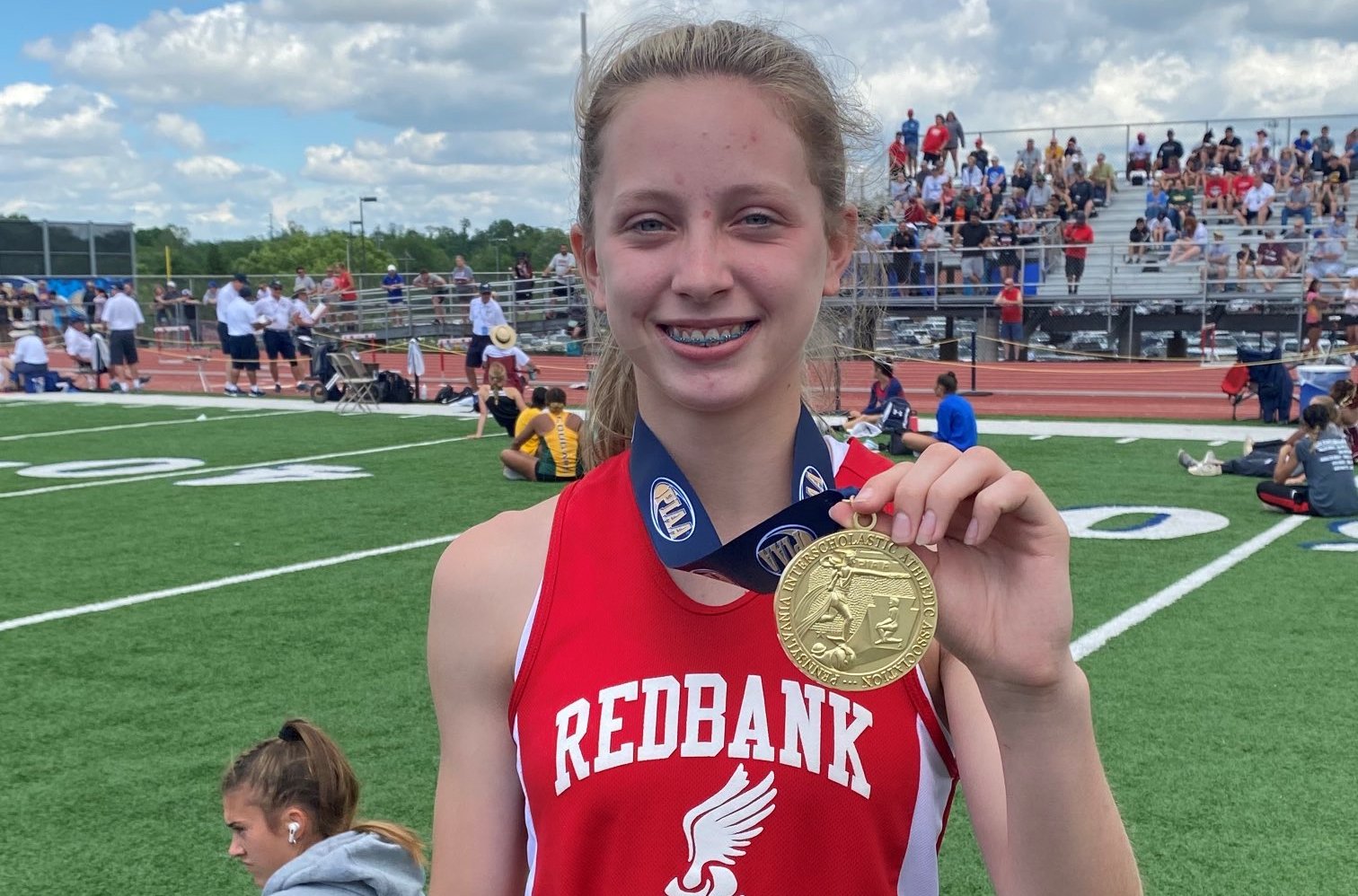 Redbank Valley freshman Mylee Harmon with her PIAA gold medal in the 400. Photo by Rich Rhoades.

SHIPPENSBURG, Pa. – Only a freshman, Redbank Valley’s Mylee Harmon put the rest of Pennsylvania on notice at the PIAA track and field championships on Saturday.

Harmon, competing in the finals of the Class 2A 400 meters, won gold in thrilling fashion with a time of 57.15. It was a race that came right down to the wire, as she beat Montoursville Lily Saul (57.31) and another freshman, Laurel’s Tori Atkins (57.41).

Harmon, the D9 meet Jim Manners Award winner, saved her best for last, coming up clutch when it mattered the most.

She talked about the thrilling race afterward:

Harmon was the only gold medalist among District 9 and 10 athletes on Saturday, but there were plenty of impressive performances and top eight medalist finishes.

There were a pair of second-place finishes. Reynolds’ Grace Bresnan, who finished sixth in the long jump on Friday, got silver in the triple jump with a leap of 37 ¼, with Taleea Buxton of West Catholic winning the event (37-6 ¾). Cranberry’s Laiyla Russell got one of her two medals on the day, taking bronze with the same leap as Bresnan. In addition, the Greenville 4×800 relay team of Karis McElhaney, Clair Anderson, Macy Blatt, and Josie Lewis took second in 9:43.97, an event won by Central Cambria at 9:30.53. It was the second medal for McElhaney, who took fourth in the 1600 on Friday.

There were two more multiple medalists, as Fort LeBoeuf’s Audrey Freidman, who took gold in the javelin on Friday, was eighth in the shot put at 37-1 /2.

Johnsonburg’s Enoch Aboussou, who broke the D9 2A meet record last week, came in a very close second in the triple jump. Aboussou leaped 45-5 ½, just ½ inch of his 45-6 jump last week, and just two inches behind the gold medalist, Taylor LaBarre of Pen Argyl. Seneca’s Lee Hoover was sixth at 44-1 ½.

Coudersport’s Kevin Sherry, meanwhile picked up his second medal of the championships, finishing fifth in the 3200 at 9:21.19, with Sean Aiken of Eden Christian winning the event in 9:13.47. It added to the sophomore’s fourth-place finish in the 1600 on Friday.

Sherry talked about his performances afterward:

Greenville had another relay team medal, as the 4×800 team of Williams, Runyon, Jalen Ritzert and Jase Herrick were eighth in 8:16.87. Also in the 4×800, the Grove City team of Caleb Hawke, Justy Brown, Wyatt Shepson, and Joshua Jones was fourth in 8:13.74. It was the second medal for Jones, who was eighth in the 1600 on Friday.

In the pole vault, Puxnsutawney’s Grant Miller was fourth (14-0) and Wilmington’s Solomon Glavach tied for fifth (13-6).

Meadville’s Khalon Simmons, a star in football and basketball as well, capped his brilliant junior season with a leap of 22-1 ½ in the long jump, good for third, with Brendan Leneghan of Saint Prep winning the event in 22-8 ¾.

In the high jump, General McLane’s Jace Walls was third at 6-4, with Dakota Arana of Shippensburg clearing 6-10 to take gold.

On the track, Fort LeBoeuf’s Hayden Skinner clocked in at 14.84 in the 110 hurdles, finishing fifth. Harrisburg’s Demaris Waters won the event in 13.86.

Grove City’s Abby Steffler took home the lone medal here, as the senior clocked in at 2:14.04, good fof fifth. Mia Cochran of Moon Area took gold with a time of 2:11.26.

D9/10 Athletes Claim Four State Titles on Day 1 of PIAA Track and Field Championships Powered by Janney Montgomery Scott in Clarion
Friedman, Bertolasia Named PTFCA First-Team All-State in T&F; Smith, Bliss, Blauser Also Honored
This website or its third-party tools process personal data.In case of sale of your personal information, you may opt out by using the link Do not sell my personal information.
×
Manage consent