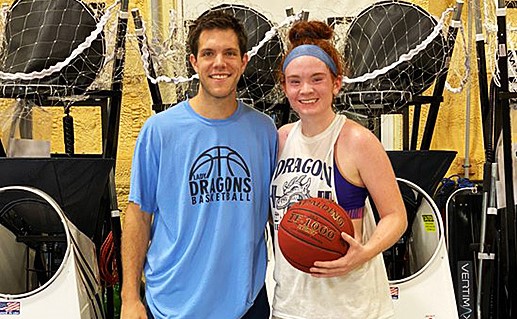 WARREN, Pa. – Athletes had to find new ways to hone their skills when COVID-19 mitigation efforts forced schools and businesses across the state to shutter, or severely limit occupants.

Warren girls basketball coach, Lisa LaVan, came across a unique way to work on ball-handling and shooting skills and encouraged her daughter, junior Emma Ruhlman, to give it a shot.

“One of the Bruins (Ruhlman’s AAU team) assistant coaches retweeted Jeremy Hays’ beat the trainer challenge,” Ruhlman said. “My mom, she’s big into Twitter, saw it and said, ‘Emma, you should try this.’ So I said, ‘Sure, why not?'”

Before long, Ruhlman was hooked.

“We did the first video,” she said. “And then did a few more and a few more. From there on it became my daily routine.  It started out like this is something fun, why not try it? And then it became something that I did every day.”

Hays, who owns Fadeaway Fitness-a basketball skills development center headquartered in Wheeling, West Virginia, started the “Beat the Trainer” videos with no intention of it becoming a challenge or social media craze.

“I really couldn’t have a whole lot of people coming to work out with me so it was like, I’m gonna just video myself and have people do this at home to kind of keep dribbling and ball-handling skills kind of sharp,” he said. “I put it out on all my social media accounts, then two days later, did another video and then the third video that I put out I did it hard and I put my time to it.”

Sharpening skills turned into a full-on challenge after Hays added a time element.

“When I put my time to it, I guess people took it as a challenge,” Hays said. “Once it went really well I said, ‘You know I’m going do it tomorrow and I’m going to officially give it a name.’ That’s where the whole beat the trainer thing came about.”

Most of the challenges were ball-handling, for many, one of the more mundane aspects of the game, with a few shooting challenges sprinkled in.

“I think it was a fun way to add some stuff to it because they’re just 22-second challenges, so I wouldn’t do it as my entire workout, but it’d be fun to get warmed up doing a good ball-handling workout,” Ruhlman said. “And have something to look forward to be like, ‘Let’s see if I can get this and let’s see how fast I can get it.'”

Ruhlman was far from the only one trying to stay sharp. The videos went viral on social media, much to Hays’ surprise.

“I’m talking day one I had, I don’t know, maybe 100 notifications on Twitter, so that’s cool,” he said. But day six was like 2,000 (notifications) then it just slowly built and by day 10 I was in 35 different states, and four different countries.”

(Screen capture of one of the “Beat the Trainer” challenge videos Emma Ruhlman completed.)

Hays’ videos reached all 50 states and 35 different countries by the time he ended the challenge after 100 days.

“My Twitter just went crazy,” Hays said. “But to connect with so many people throughout the world, just from a dribbling video that I never even meant to take off, has been kind of the coolest part.”

Through playing AAU games this summer, Ruhlman said she could see an improvement in her ball-handling skills. It was noticeable to others as well.

“She had a tournament in Cleveland, and their backup point guard ended up getting hurt,” LaVan said. “So that meant that Emma had to bring the ball up and that was the first time that she was consistently being a ball-handler and I was like, ‘Holy crap, her ball-handling did get a lot better.’ There’s a little guard up in her shorts, and (Emma)’s towering over them and just handling it with ease.”

Primarily tasked as a “big” for the Lady Dragons, Ruhlman knows her future at the collegiate level is more likely at guard, where ball skills are vital to success.

“I think it was very beneficial,” Ruhlman said. “I can tell playing pickup and playing AAU I feel a little bit more comfortable in some ball-handling. Especially at my height, when I was younger I was playing a post, and now I want to play a guard in college and that’s something very important.”

While the videos were beneficial, Ruhlman took the next step, again at coach/mom’s urging, and asked Hays about one-on-one training.

“My mom was like, ‘He does one on one training, do you think you’d want to go work out with him?'” Ruhlman said.

Hays has a gym in St. Clairsville, Ohio, little more than an hour from Pittsburgh, which served as a nice stopping point as Ruhlman’s AAU team, the Western PA Bruins, is based in Pittsburgh.

“I have practice in Pittsburgh,” Ruhlman said. “So we said, ‘Let’s go (to practice) and then we’ll go and work out with him.”

The video challenges were difficult, but Ruhlman soon found out just how intense Hays’ training sessions are.

“I get there and it’s just it’s an hour workout,” she said. “I’ve been through a lot of workouts, I work out quite a bit, I would say, and this is probably the hardest basketball workout I’ve ever done.”

Hays’ philosophy, at its core, is simple. He wants to push his clients to be as good as they can.

“One thing I learned with him is just the importance of game speed and his energy level is such that I get exhausted and I’m not even working out with him,” LaVan said.

“I don’t like going half-speed,” Hays said. “The reason I say that is if I bring somebody in the gym, let’s just say it’s their first workout. So I bring them all the way down here, and we just kind of go half speed. One, that sets the tone that this is how we’re working out. But then also, you don’t play like that in the game.”

The close work with Hays is likely to, read well, translate into new drills and techniques for the Lady Dragons as well.

“I got so many drills that we’ve started (using at open gyms),” LaVan said. “That’s definitely been a nice touch.”